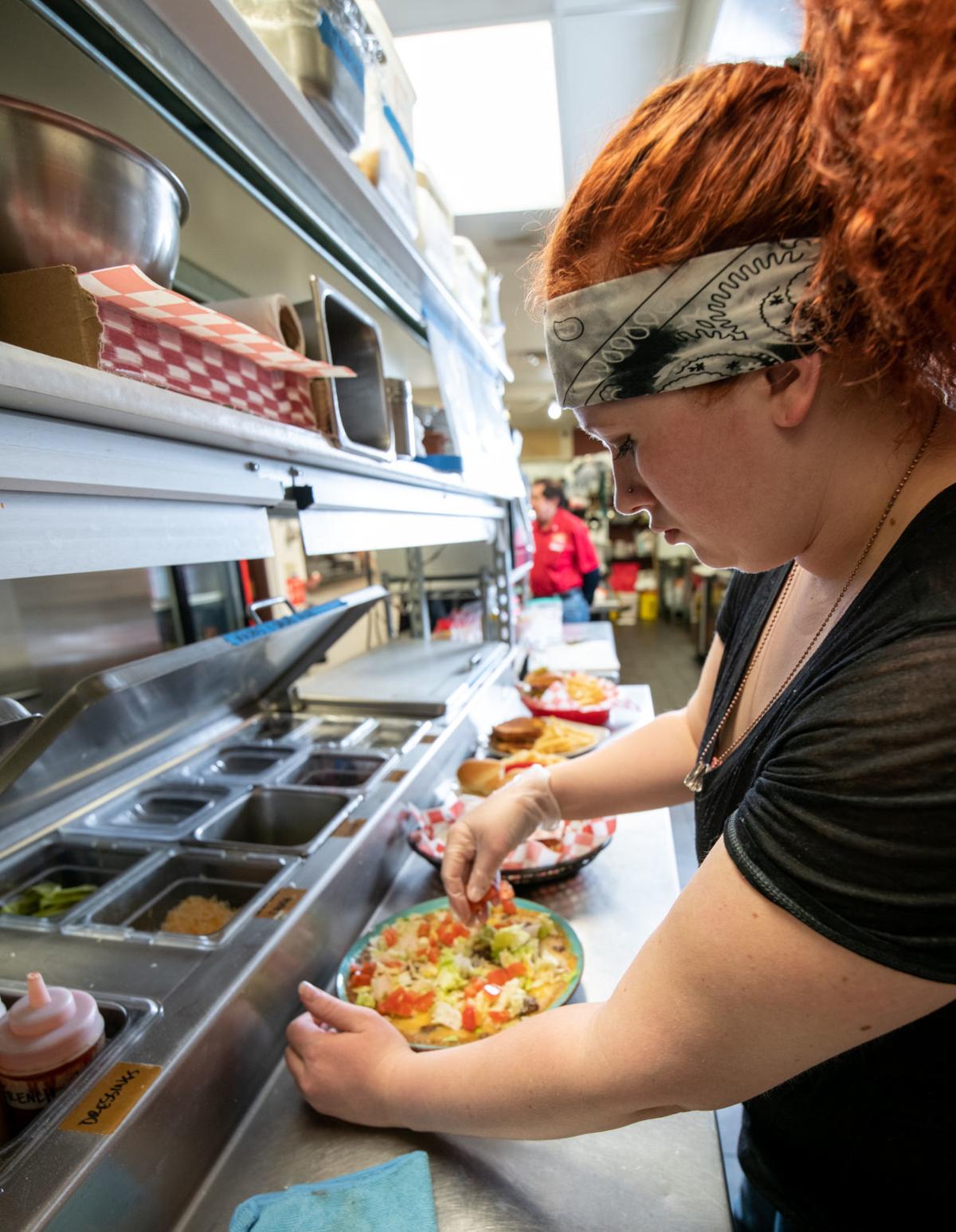 Kiali Gatto arranges the toppings for disrobed nachos at the Castle Pub in Sioux City. 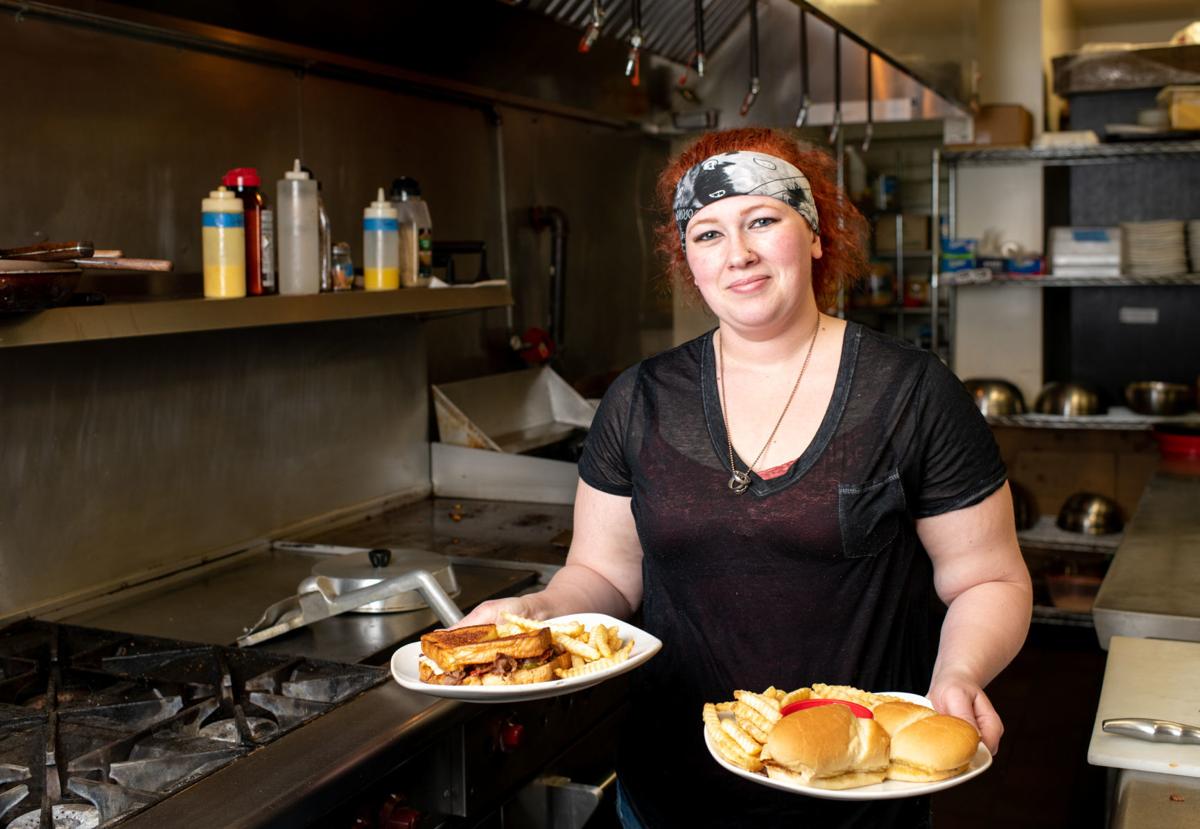 Kiali Gatto serves a Philly cheesesteak, and a french dip sandwich with au jus at the Castle Pub. 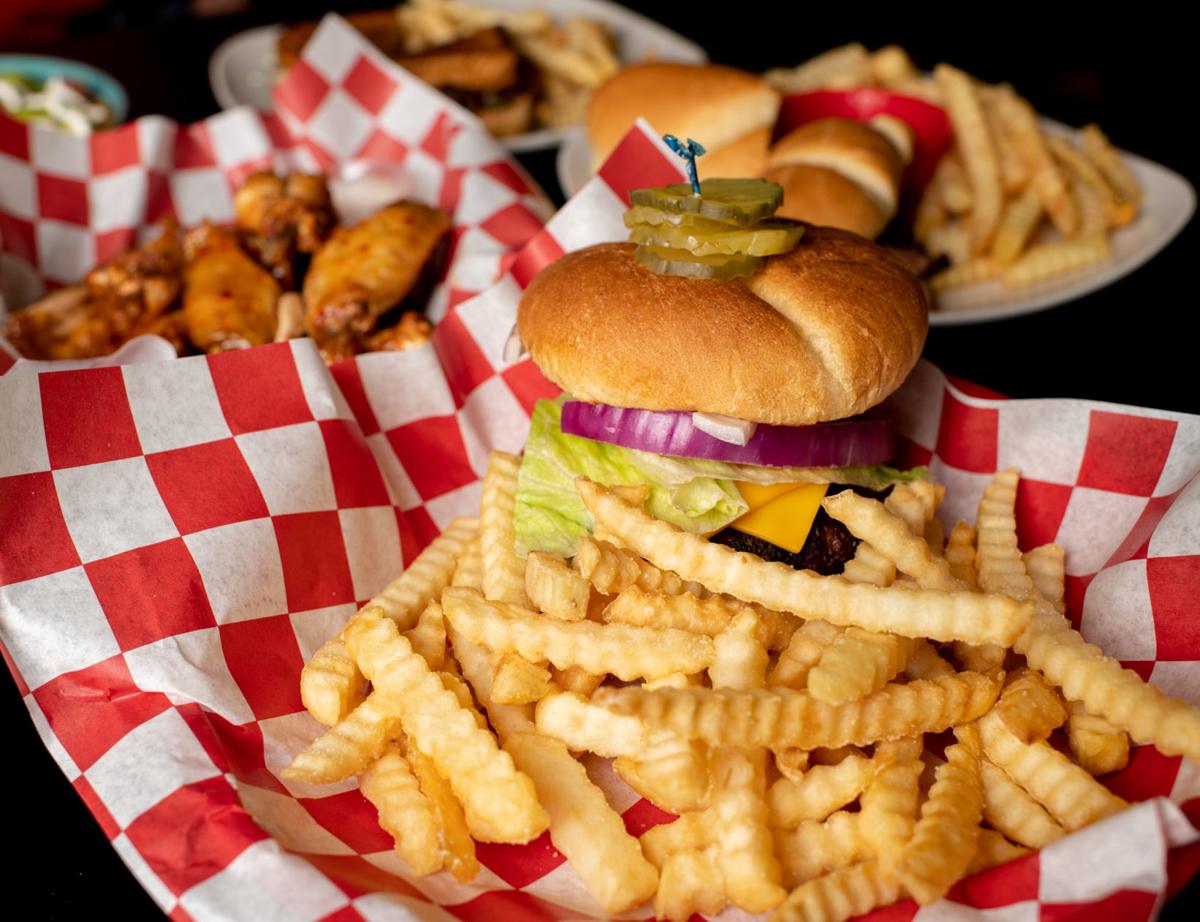 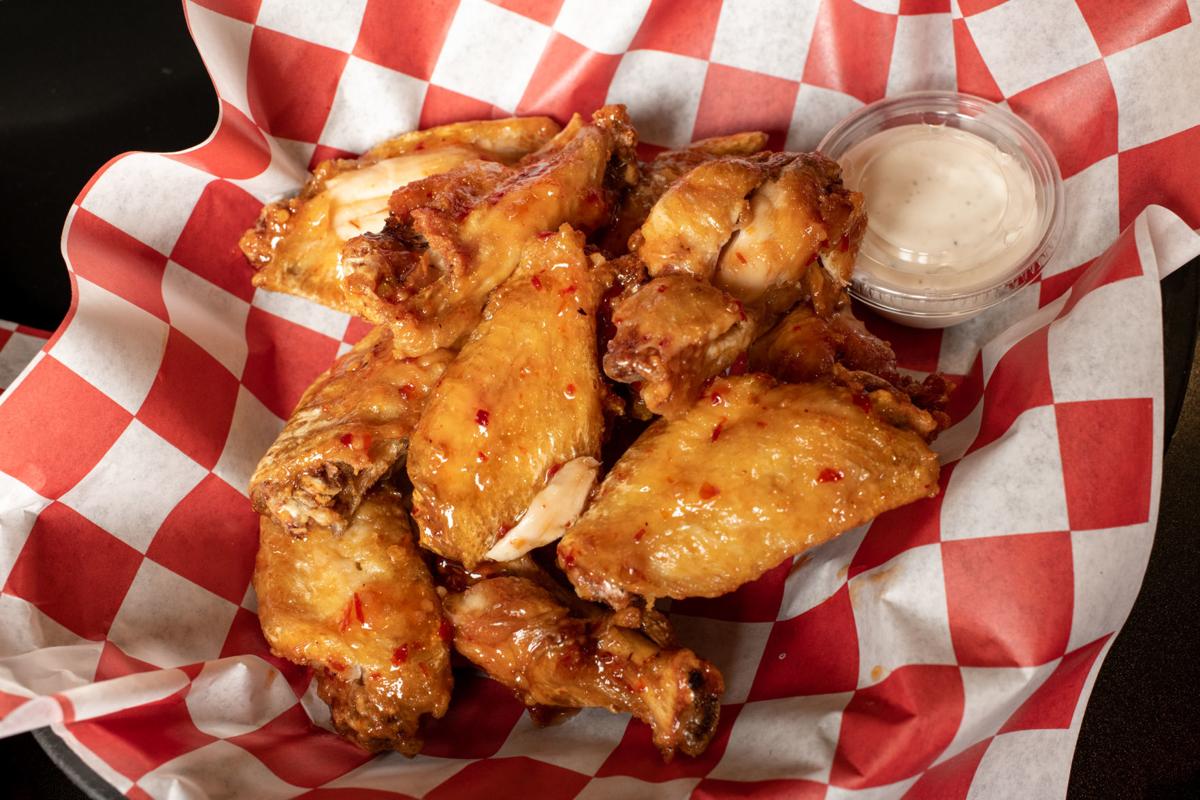 Broasted chicken wings covered in Asian Zing sauce is a fan favorite at the Castle Pub. 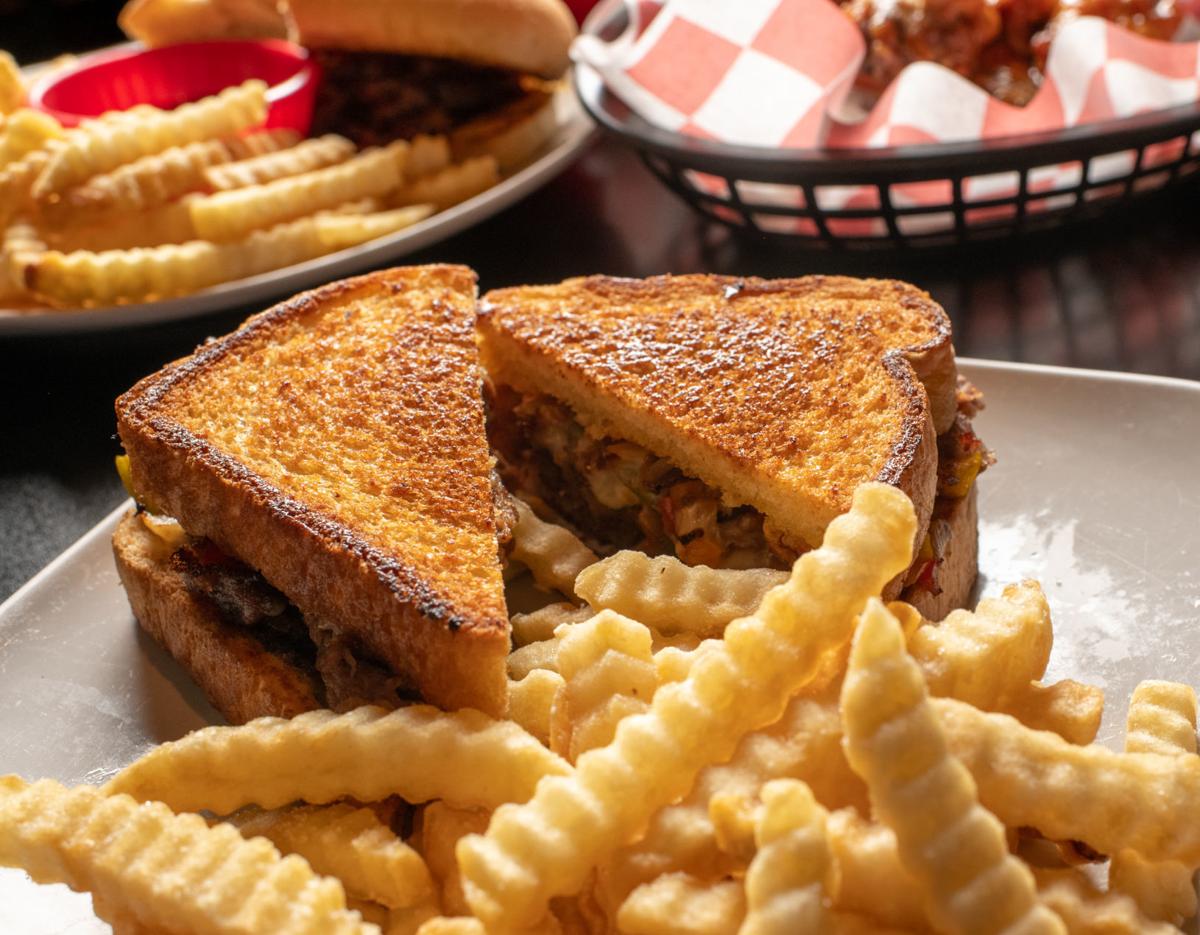 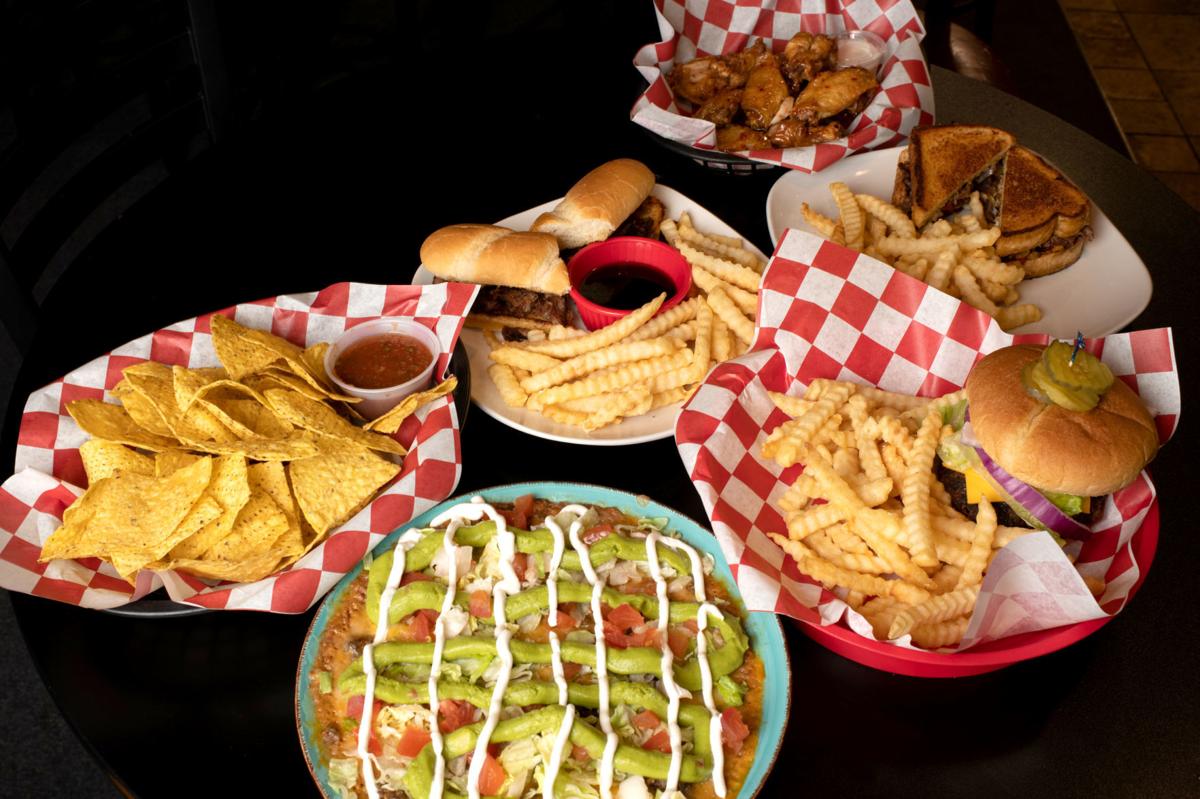 In addition to disrobed nachos - which have the toppings on the side so the chips never get soggy - the Castle Pub will also feature Philly cheesesteak sandwiches, broasted chicken wings, and 9-ounce burgers on Super Bowl Sunday. 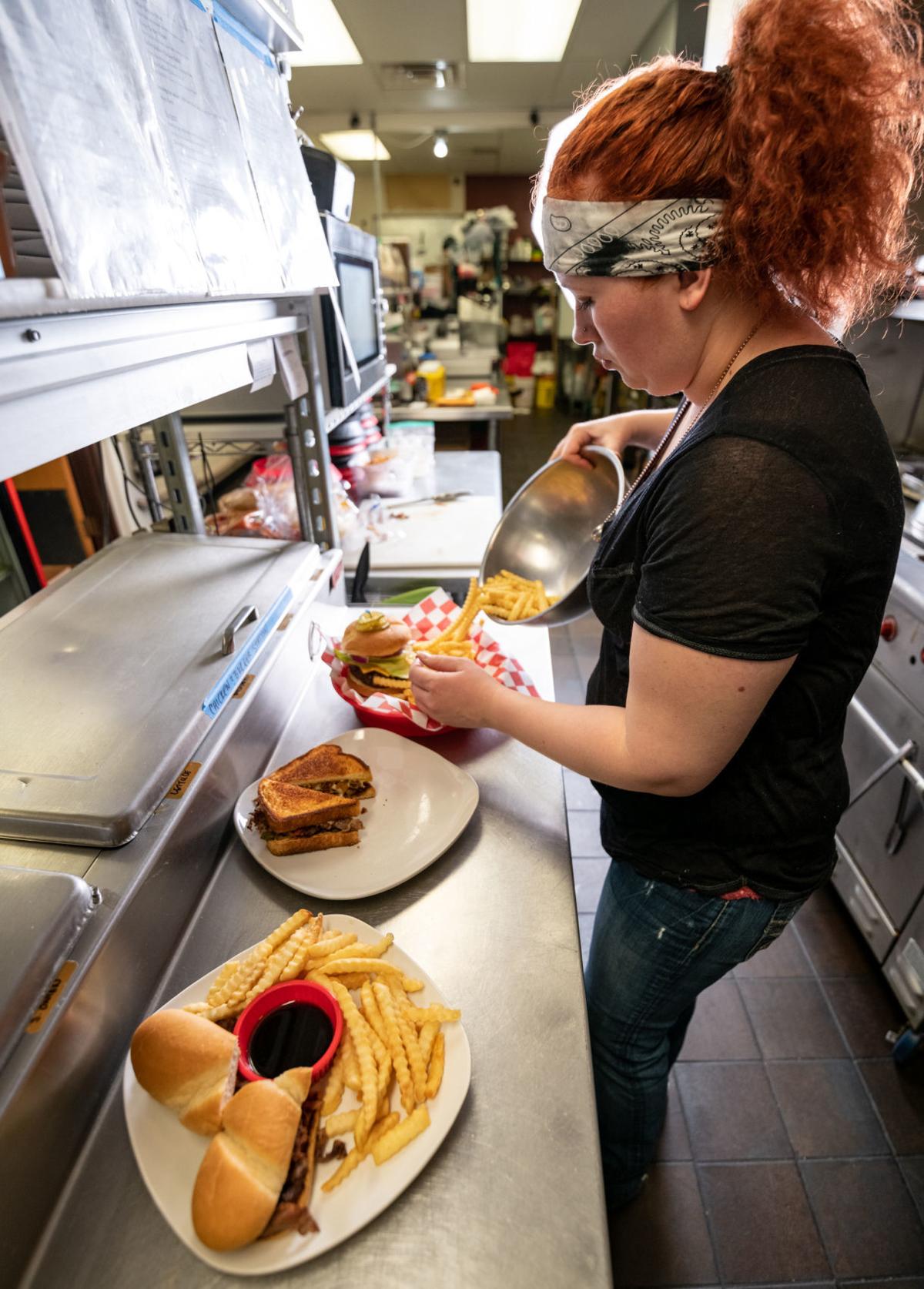 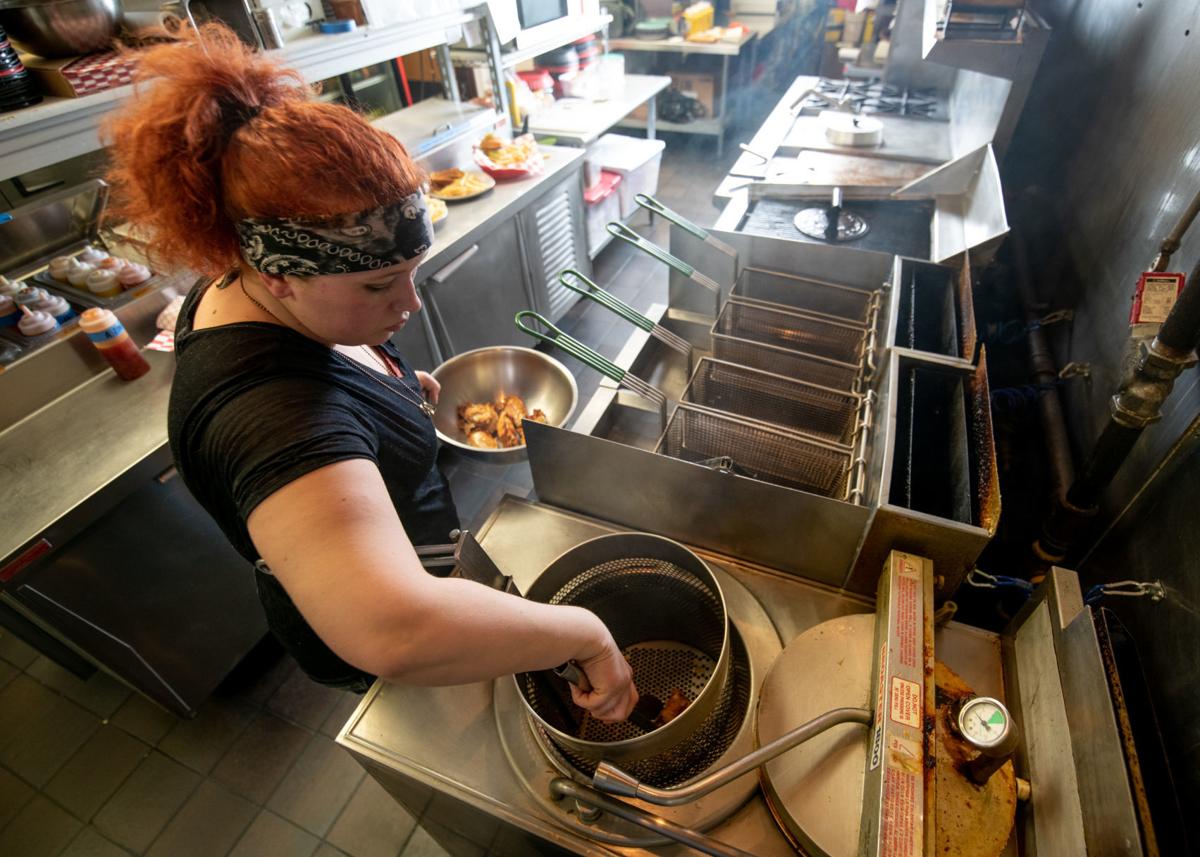 Kiali Gatto removes chicken wings from the broaster before smothering them in Asian Zing sauce. 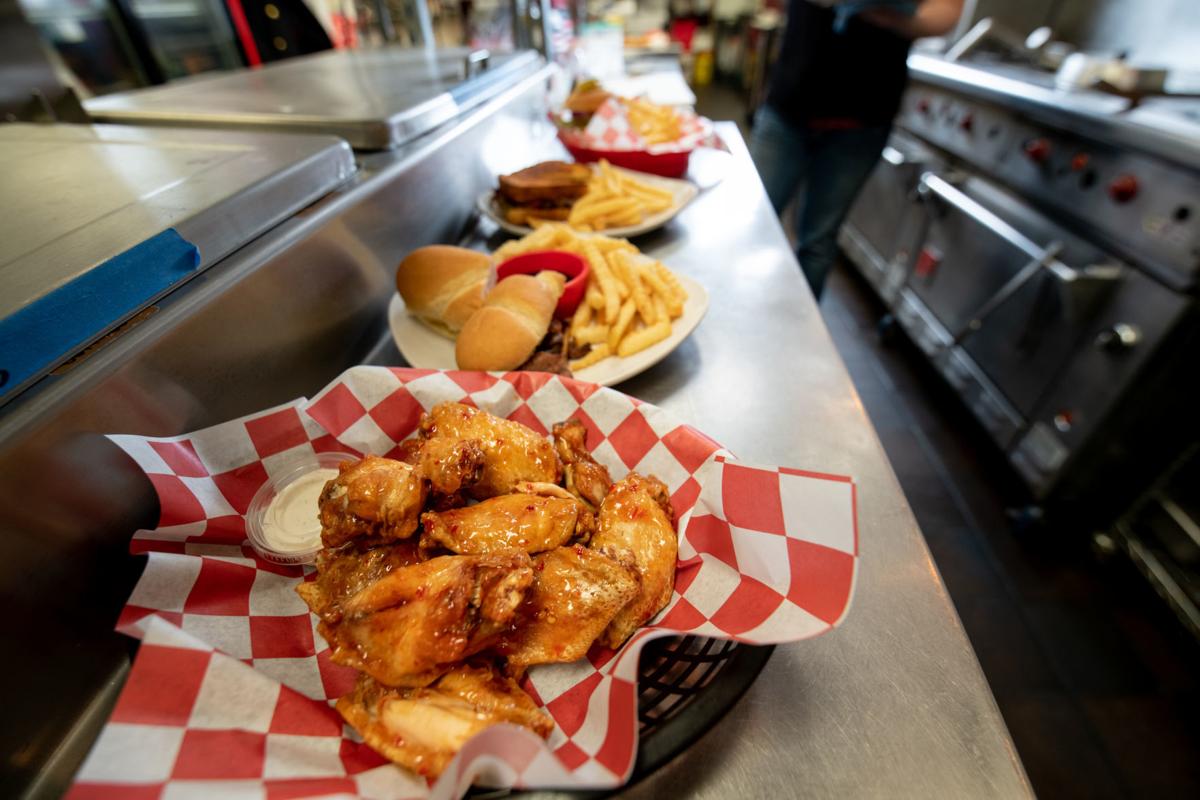 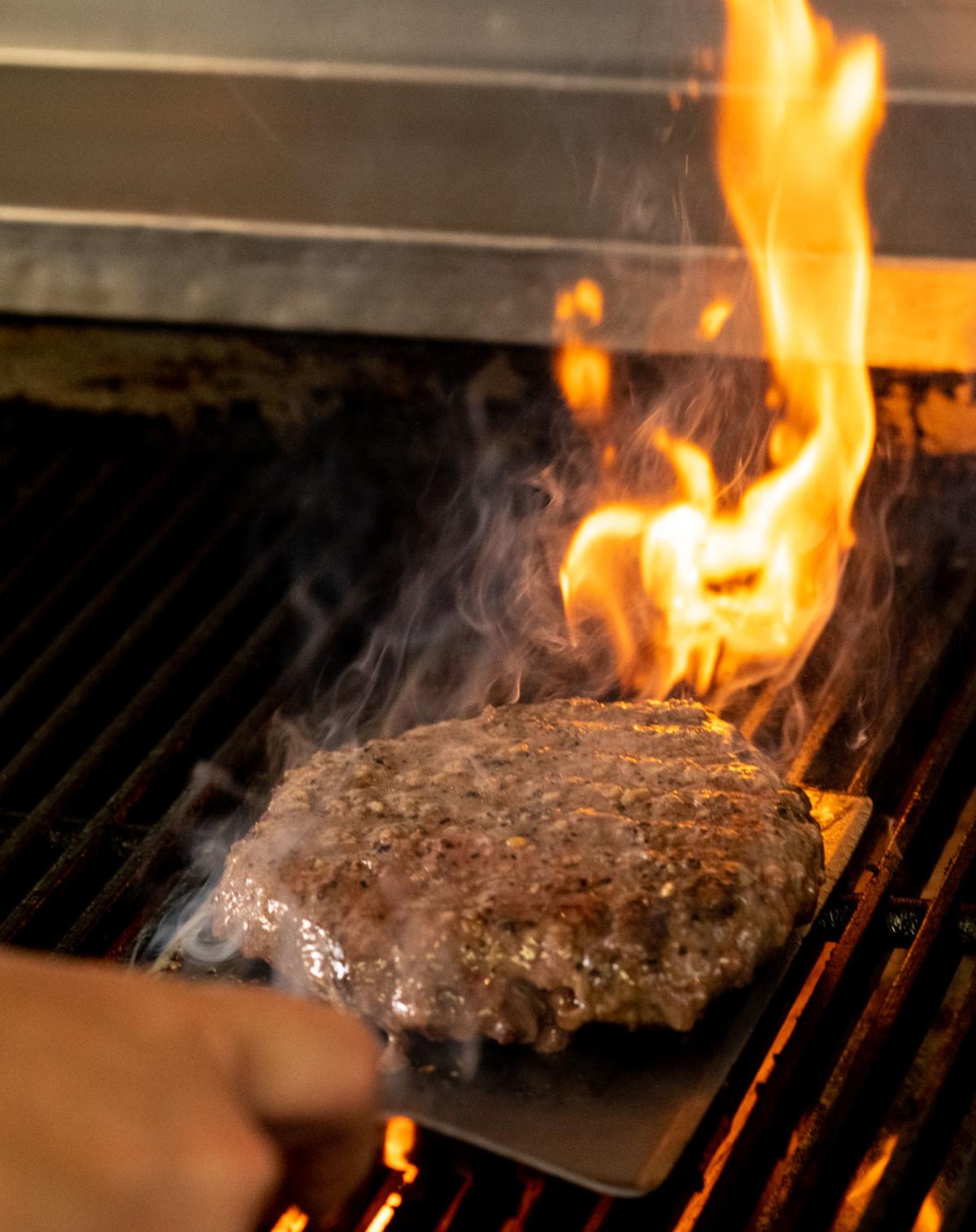 Kiali Gatto flips the patty for a 9-ounce burger. 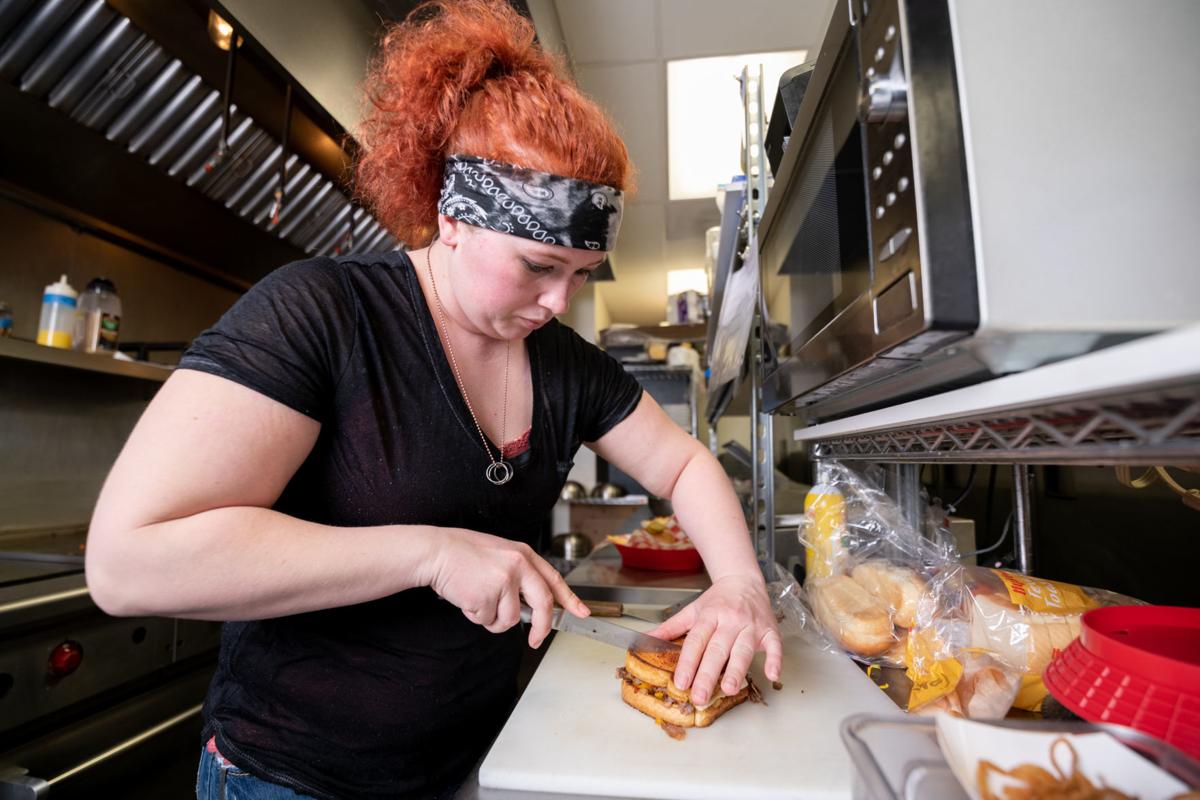 Back in the days when men wore tights, Sir Lancelot and the Knights of the Round Table were known to toss around an oval-shaped piece of pigskin while Lady Guinevere showed off her pom-poms and royal jester Terry Bradshaw provided color commentary.

OK, the preceding scenario was completely bogus -- with the possible exception of the Pittsburgh Steelers quarterback being around during medieval times, of course.

However, it is the perfect way to start off out Weekender Guide to Super Bowl Eats with Domingo Torres, king of the Castle Pub & Grill.

"We have plenty of Chiefs fans as customers as I imagine we also have some who are 49ers fans," the veteran business owner said, inside his Arthurian-inspired, 4400 Singing Hills Blvd. eatery. "It should be a fun time."

Not only will Torres have his regular menu, Super Bowl fans will also be able to belly up to the Castle's special taco and chili dog bars without missing a moment of action.

And for Super Bowl, you can never have enough food.

PIGGING OUT AT YOUR PIGSKIN PARTY

Make no mistake about it, Super Bowl is as much about stuffing your face as it is about rich dudes tackling one another on the boob tube.

Indeed, Super Bowl Sunday is second biggest food "holiday," next to Thanksgiving, in the United States.

Unlike other holidays, Super Bowl Sunday is one of the busiest days for takeout food. In fact, one out of seven Americans will be be calling in orders on Sunday.

"At many place, there's a restaurant section and a bar section," Torres explained. "At Castle Pub, we have no separation. We're just one big room. That adds to the party atmosphere."

COME FOR THE 'NAKED' NACHOS, STAY FOR BODACIOUS BURGERS

If Torres is the one who lords over the Castle's dining room, Kiali Gatto is the queen of the restaurant's kitchen.

With more than a decade of culinary experience under her belt, Gatto is slowly reinventing the sports bar's food offerings.

So, what is her newest creation? Giving an East Coast Classic sandwich some Lone Star State panache.

"I love Philly cheese steak sandwiches but I knew there was room for improvement," Gatto said. "Instead of using a Hoagie roll, my Phillys are inside Texas toast."

This switcheroo allows her to slip in more meat while giving the sandwich more texture.

Similarly, the naked nachos -- or in the parlance of the Castle, "disrobed" nachos -- separate the tortilla chips from a plateful of beans, cheese, taco meat, lettuce, tomatoes, onions and sour cream.

"Personally, I'm a slow eater," Torres said. "In the past, I'd order nachos but the chips would be soggy from all of the dip. If you keep the chip separate from the dip, you'll never get a soggy dip."

That's pretty ingenious, we think. So is Castle's Pub's take on a half-pound burger patty.

"We simply added one more ounce," Torres explained with a laugh. "Many places have eight-ounce all-beef patties. Our patties are nine ounces."

"Believe me, we weigh each and every one of 'em," interjected Gatto.

A SIOUX CITY DINING DESTINATION FOR THE PAST 11 YEARS

While football fans will have much to celebrate on Sunday, Torres will also be touting his own personal accomplishment.

"This will mark the Castle Pub & Grill's 11th birthday," he said. "We're so grateful to our customers for supporting us over all that time."

While he credited a fun atmosphere, a well-stocked bar and classic bar food faves for bringing diners back for more, Torres also drew inspiration from a very unique source: Norman Vincent Peale.

A PUB OWNER'S POWER OF SUGGESTION

Wait, does Torres mean that minister who wrote "The Power of Positive Thinking" book? That Norman Vincent Peale?  Yup, the very same!

"Peale used the power of suggestion to get people to try new things," Torres explained. "I do the same thing when persuaded an old-school Schlitz or Hamms beer drinker to try something trendier. I'll give the guy a taster glass of a similar beer, linking to the two in the mind of the customer."

"I may not get the customer to switch beers, but I have introduced the idea," he continued. "The power of suggestion is an important tool to have."

This includes continuing critiques on such Castle mainstays like the French Dip sandwich as well as the different sauces used on its wings.

"We are always striving for consistency in our dishes," Torres said. "People should know what to expect with our food."

THE KEY TO MAKING SPICY SALSA

Well, that may be easier said than done since Torres, himself. makes Castle Pub's homemade salsa.

"People say our salsa varies in spiciness," Torres said. "I attribute that to my wife. If I'm happy at home, the salsa's mild. If I'm mad at my wife, the salsa is spicy."

Having said that, does he have any prediction for Sunday night?

While Torres isn't predicting a Super Bowl victory, he is willing to pick a fight with his wife.

"I'm hoping for a hot night with plenty of spicy salsa," he said with a laugh.

A day to eat and drink ... plus you can watch football, too

This probably won't surprise anyone but your friends at the Weekender think of Super Bowl Sunday as a food holiday, not one a sporting event.

Guess what? We're not alone.

Super Bowl is as much about filling our bellies than anything else.

So what are people gnawing on during the NFL's biggest game of the year? 60 percent of those ordering takeout are choosing pizza.

Perhaps feeling a bit cocky are chicken wings, which came in second place. The National Chicken Council estimates Americans will eat more than 100 pounds of chicken wings on Super Bowl Sunday. Let's show our math: this equal about 1.25 billion wings.

However, meatheads might prefer a bit of beef. Nearly 14 billion burgers will be grilled up on Sunday.

And yup, game day has come and gone, the sale of antacids will increase by 20 percent. Plus around 1.5 million Americans will call in sick on Super Bowl Monday.

So be careful as you snack, y'all!

Taking do or dye attitude, Hairball isn't teasing with a night of shear madness

The Sioux City show comes a year after the group made waves when lead singer Bobby Jensen's head caught on fire during a performance at the Tyson Events Center.

Featuring the "toughest, fastest and most extreme flat track motorcycle and quad races" these world championship racers will fly across the Tyson Events Center from 0-to-60 mph in less than three seconds.

Every time Esmeralda Sebastian Benitez looks down, she sees the colors of the rainbow.

Grab your cardboard sled and glide down Cone Park

What started as a way to get kids active on a winter day is turning into a outdoor festival for the entire family to enjoy.

Kiali Gatto arranges the toppings for disrobed nachos at the Castle Pub in Sioux City.

Kiali Gatto serves a Philly cheesesteak, and a french dip sandwich with au jus at the Castle Pub.

Broasted chicken wings covered in Asian Zing sauce is a fan favorite at the Castle Pub.

In addition to disrobed nachos - which have the toppings on the side so the chips never get soggy - the Castle Pub will also feature Philly cheesesteak sandwiches, broasted chicken wings, and 9-ounce burgers on Super Bowl Sunday.

Kiali Gatto removes chicken wings from the broaster before smothering them in Asian Zing sauce.

Kiali Gatto flips the patty for a 9-ounce burger.