Even with the cancellation of this year's National Spelling Bee, a Dakota Valley kid still has buzz
View Comments
Share this
Return to homepage × 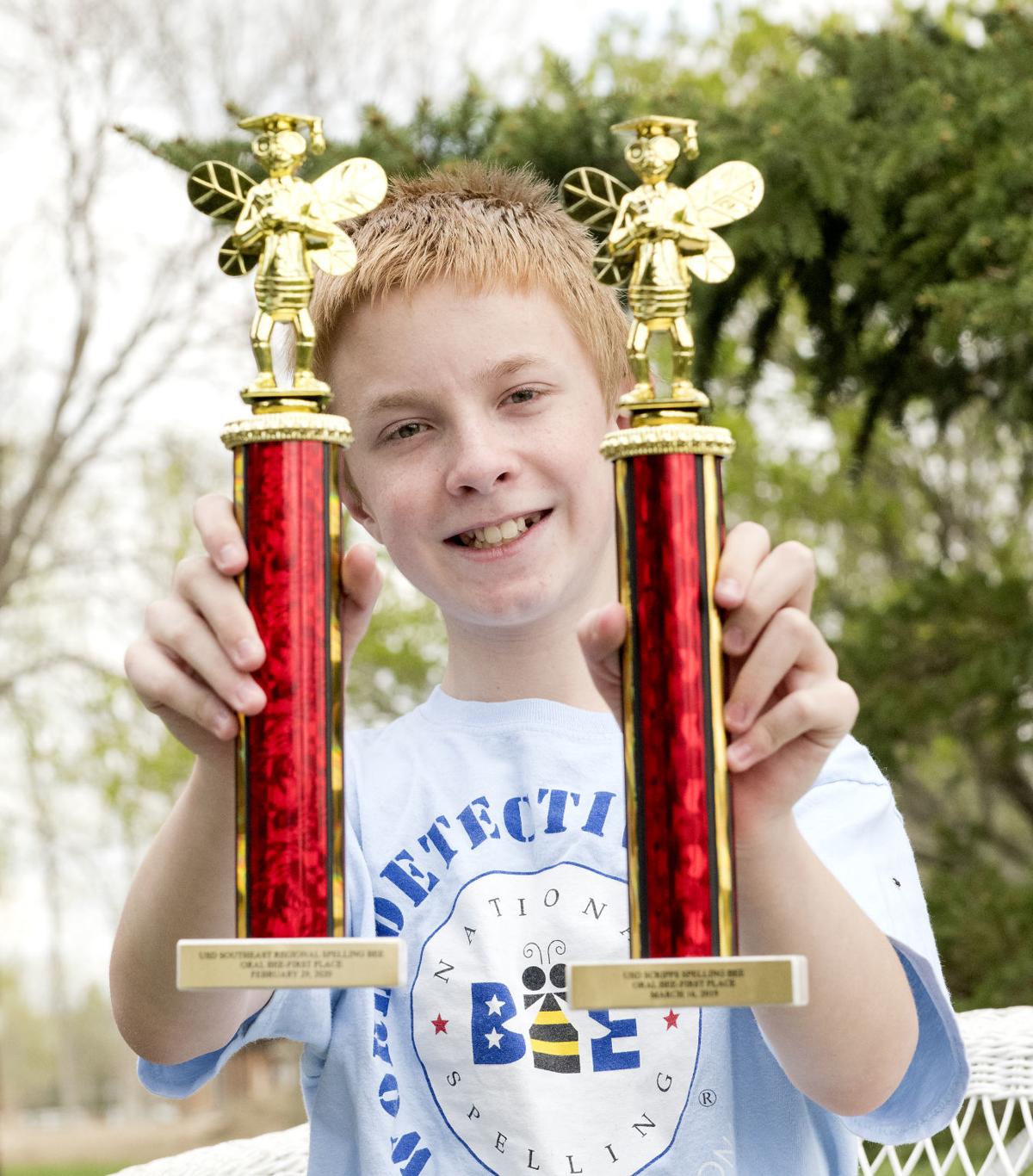 Brendan Lindsey is one of the nation's top (age 14 and under) spellers and he has the trophies to prove it. 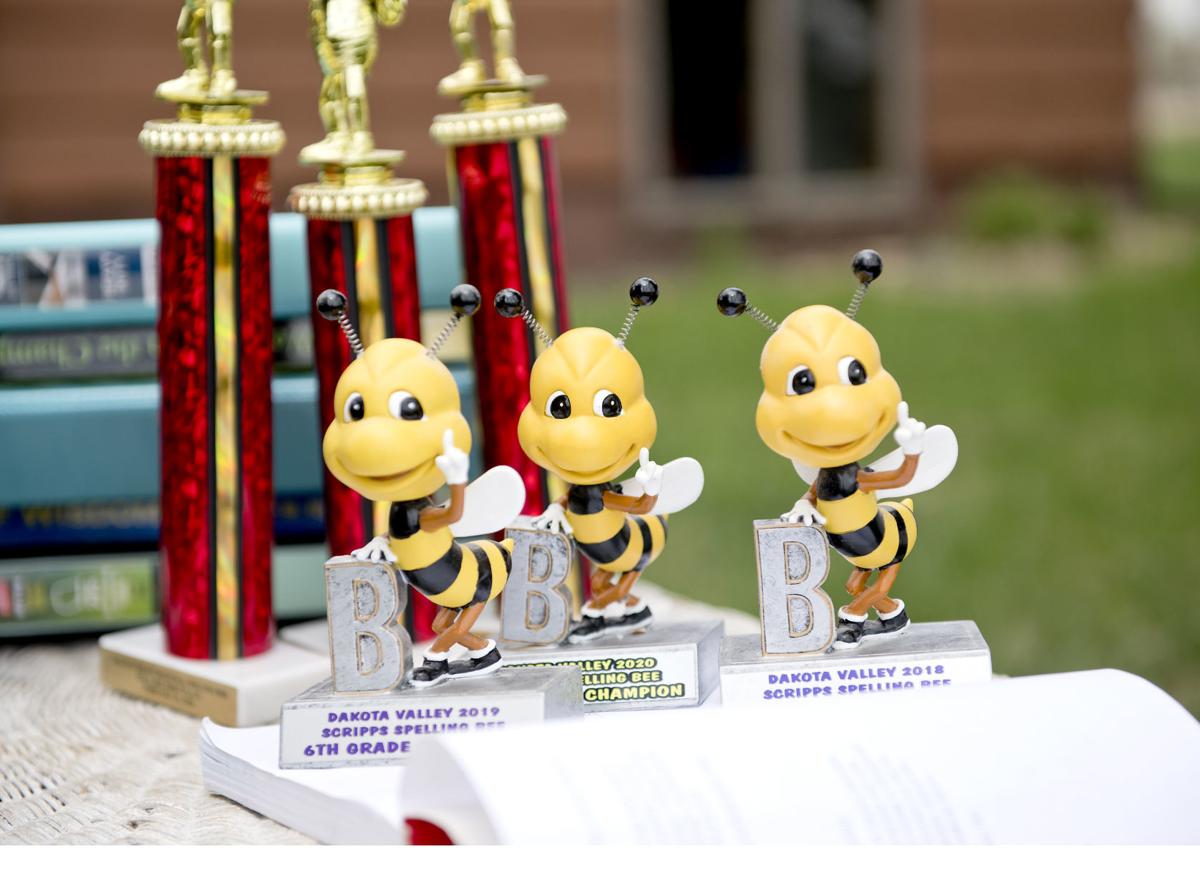 Dakota Valley Middle School seventh grader Brendan Lindsey has a bee-utiful collection of spelling trophies. All he needs is another win as an eighth grade spelling champ to get a set of four prizes.

DAKOTA DUNES -- Think of Brendan Lindsey, 12, as being a sort of Indiana Jones of the competitive spelling world.

Sure, he can even use the most obscure terms with ease but the Dakota Valley Middle School seventh grader prefers deconstructing words at their roots as well as discovering what they mean.

"Out of my spelling awards, the most important ones are for vocabulary," Brendan said, standing in front of bee-shaped trophies. "Spelling a word is easier if you know what it is."

In May 2019, Brendan earned the right to represent South Dakota at the 92nd Scripps National Spelling Bee in Washington. D.C. Competing with approximately 561 of the nation's top kid spellers, he made it all the way to the contest's third round.

What was the word that tripped him up? Stannum.

"Stannum is the Latin word for tin," Brendan explained. "You always remember the words you mess up."

Despite the loss, he recommitted himself to the cause.

Known as "The Human Dictionary" by his Dakota Valley classmates, Brendan took home the top prize at this year's district level competition for the National Spelling Bee.

Ordinarily, this would've propelled him to South Dakota's statewide contest. Alas, that was canceled due to concerns over COVID-19. To add insult to injury, the National Spelling Bee, which was to take place on May 24, was also canceled for the same reason.

This will be the first year since 1945 where they won't have a Scripps National Spelling Bee contest.

"I was surprised when they canceled the state spelling bee because it happened so quickly," Brendan said. "I sort of assumed they'd cancel the national spelling bee after that."

Brendan said he isn't too disappointed since he has time on his side.

America's largest and longest-running spelling contest, Scripps National Spelling Bee is open to winners of regional-sponsored competitions held in states, territories and a handful of other countries around the world.

In order to qualify, students must be under the age of 15 and not yet in the ninth grade.

That means Brendan will need to make his mark for the chance to win $50,000, a $2,500 U.S. Savings Bond, an engraved loving cup as well as bragging rights on a national stage.

However, the easy-going Brendan doesn't really seem like much of a braggart.

At school, he enjoys studying history, especially when it comes Medieval times. He likes to read but dislikes book reports.

"You take the fun out of reading when you have to write about it," Brendan admitted.

During his unexpected, COVID-19-related break from school, Brendan still keeps up with online homework assignment while he likes to spend time with his cat, who sometimes plays rough, as well as a pet hen, who sometimes pecks.

And whenever the mood strikes him, Brendan breaks out the spelling books and folders that helped him to become one of the nation's top spellers.

"This year, I couldn't make it to the National Spelling Bee because it was canceled," he said. "Next year, I'll be a year older, a better speller and I can't wait."

The makeup show is currently slated for for July 19 at the Grandview Park Bandshell.

SUX 6: The six best things to do in Siouxland this weekend

Here's what's on tap for the holiday weekend.

Manager Brent Stockton said officials are taking steps to make sure that patrons are safe and comfortable. It offers everything from social distancing to volunteers wearing masks during open mic nights.

Brendan Lindsey is one of the nation's top (age 14 and under) spellers and he has the trophies to prove it.

Dakota Valley Middle School seventh grader Brendan Lindsey has a bee-utiful collection of spelling trophies. All he needs is another win as an eighth grade spelling champ to get a set of four prizes.