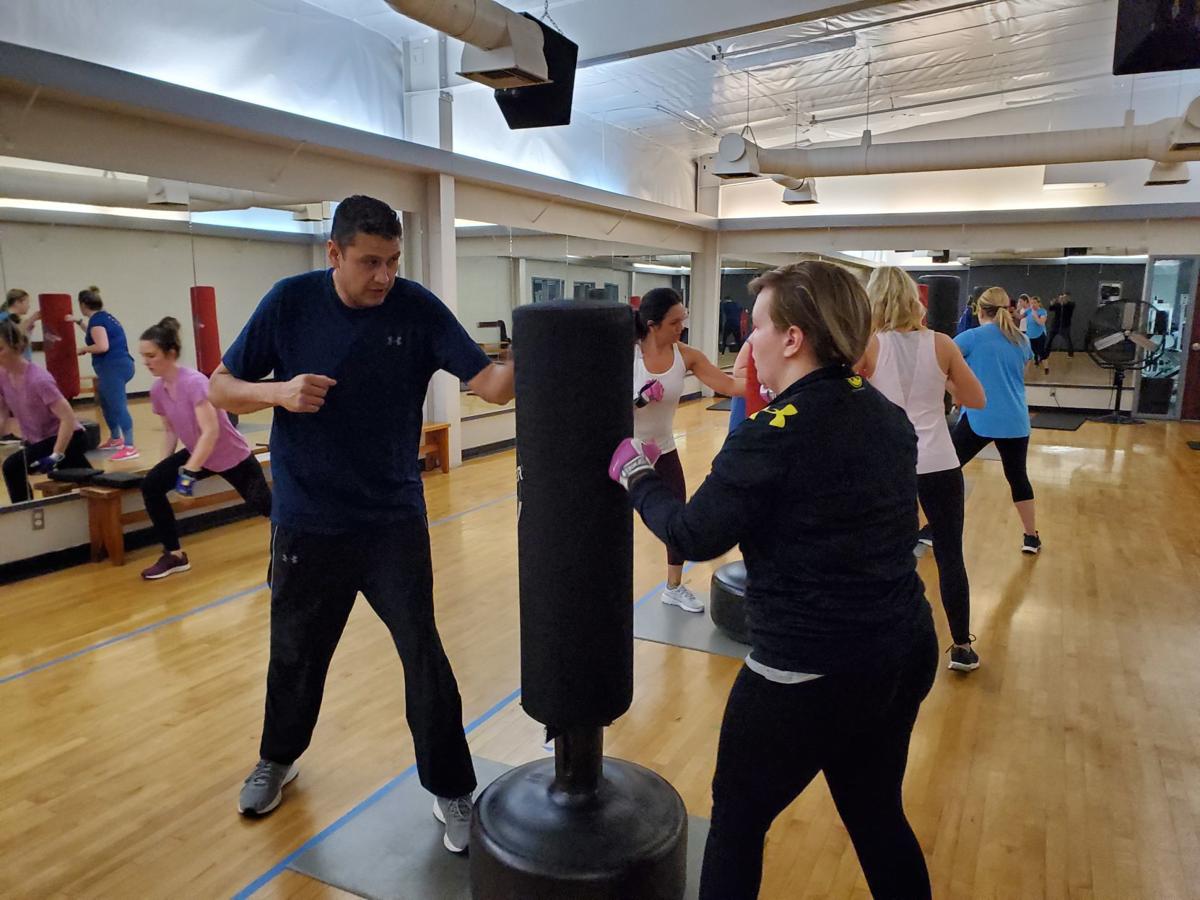 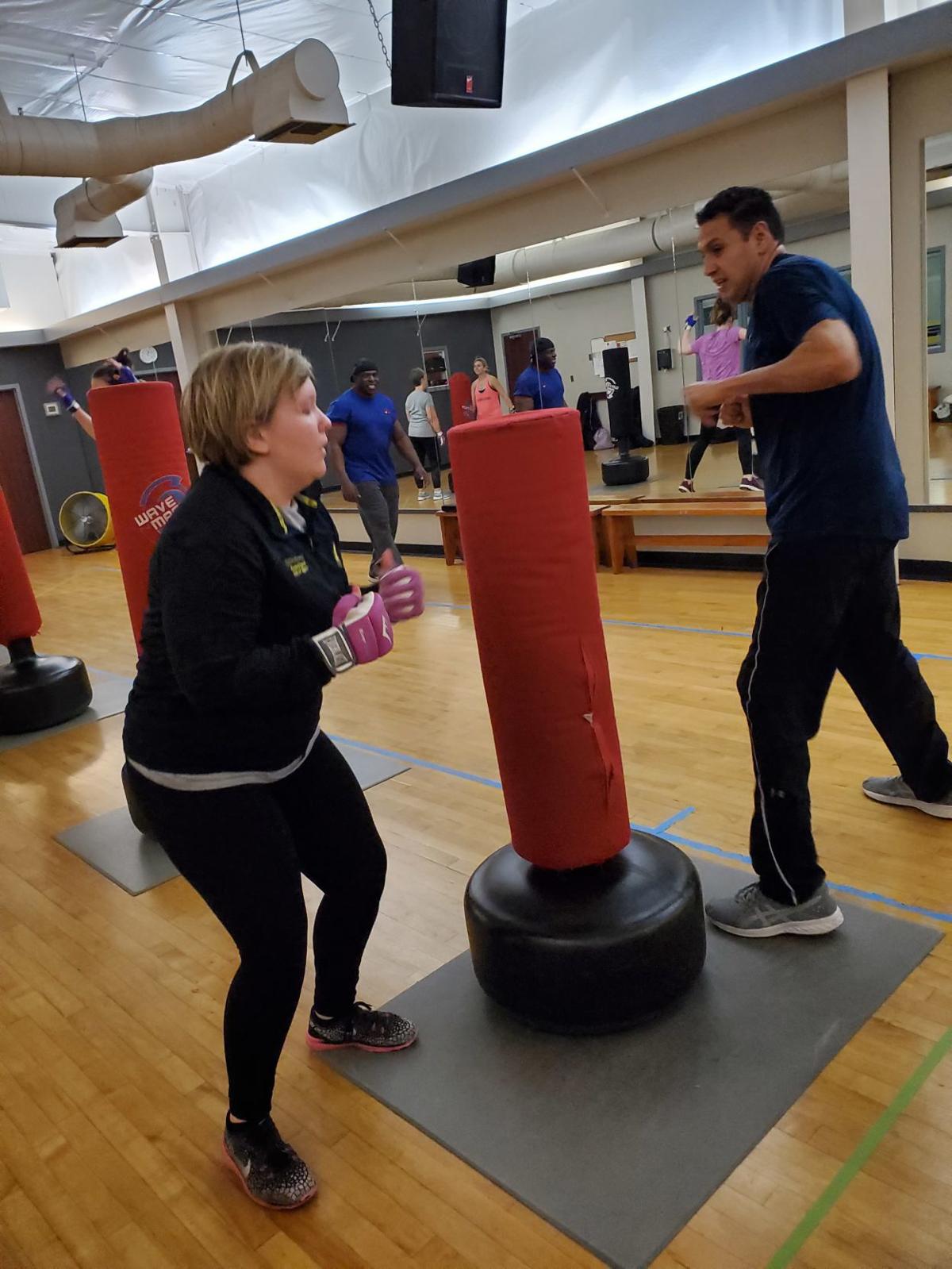 Nicole Coener and Ivan Nuno take turns hitting a punching bag during a Shake & Shed class taught by veteran fitness coach Rod Ketchens. Ketchens created the class that is geared towards people wanting to stay active in the wintertime. 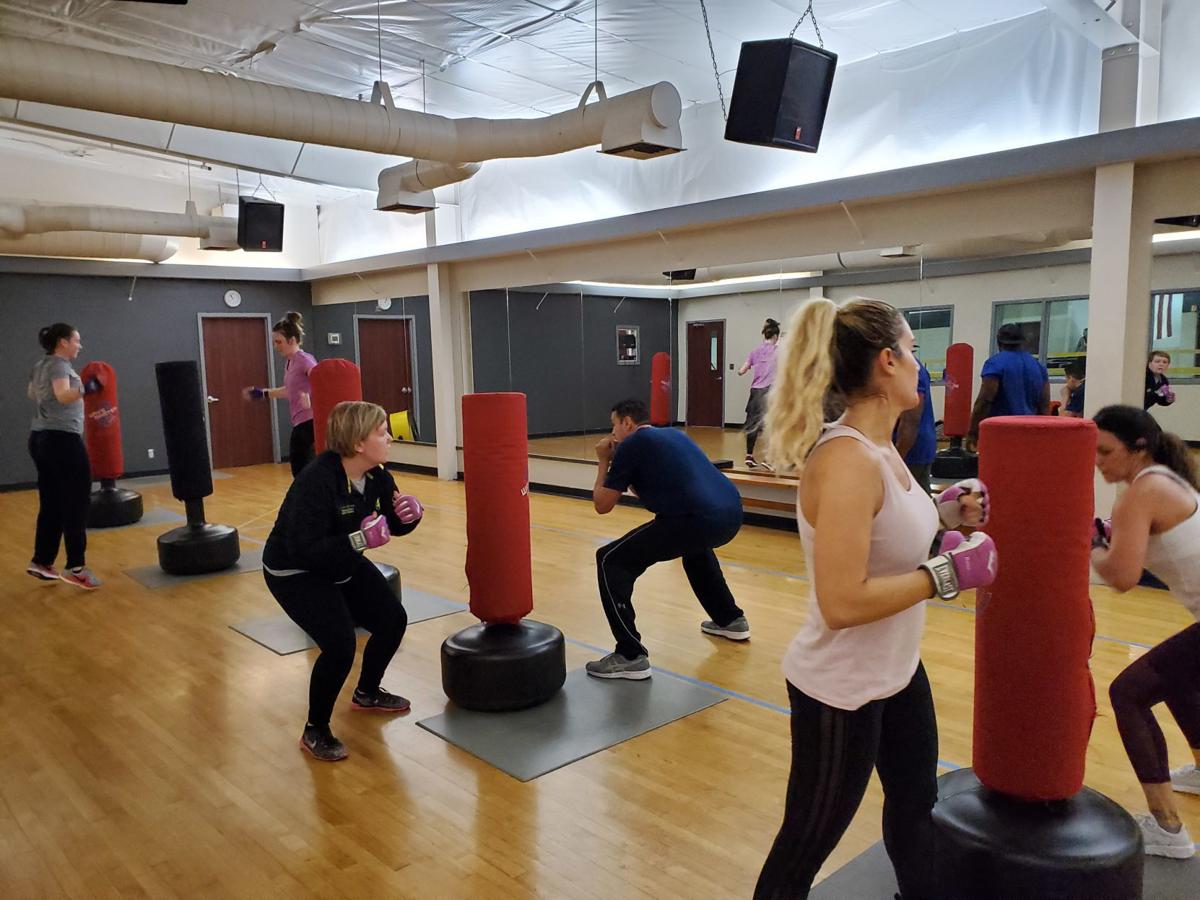 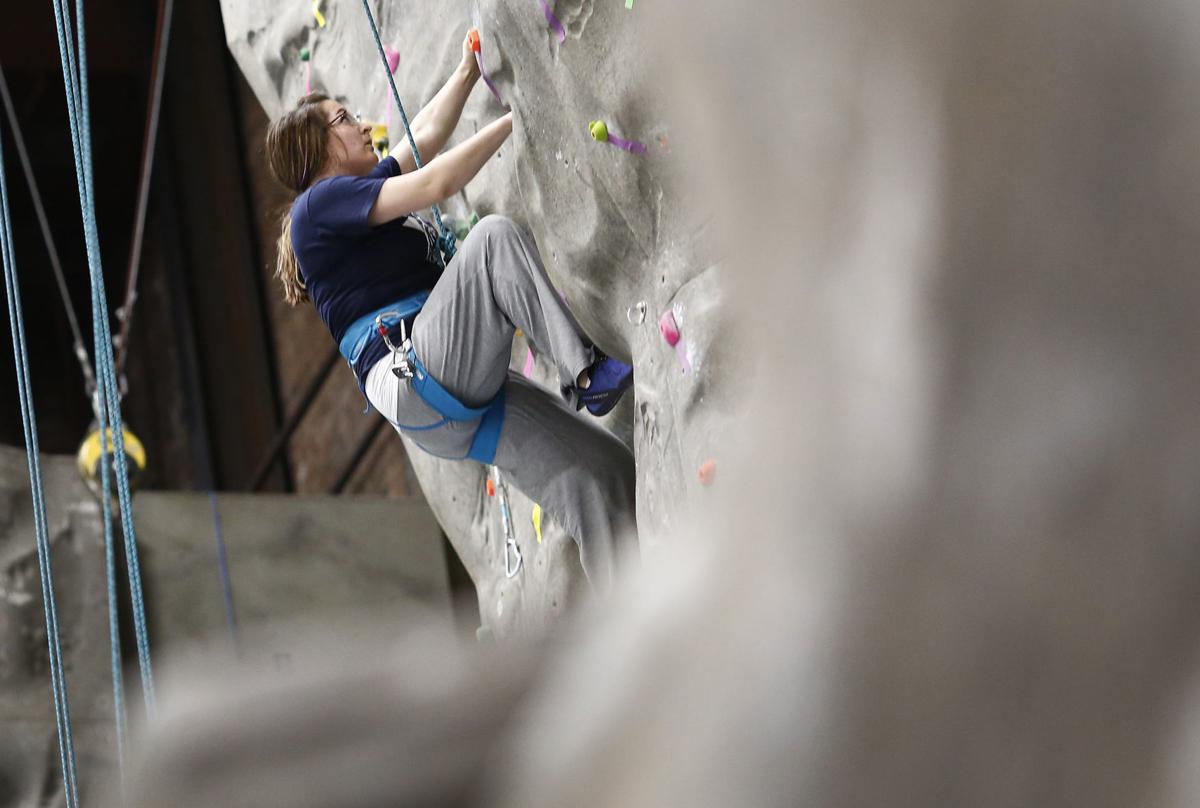 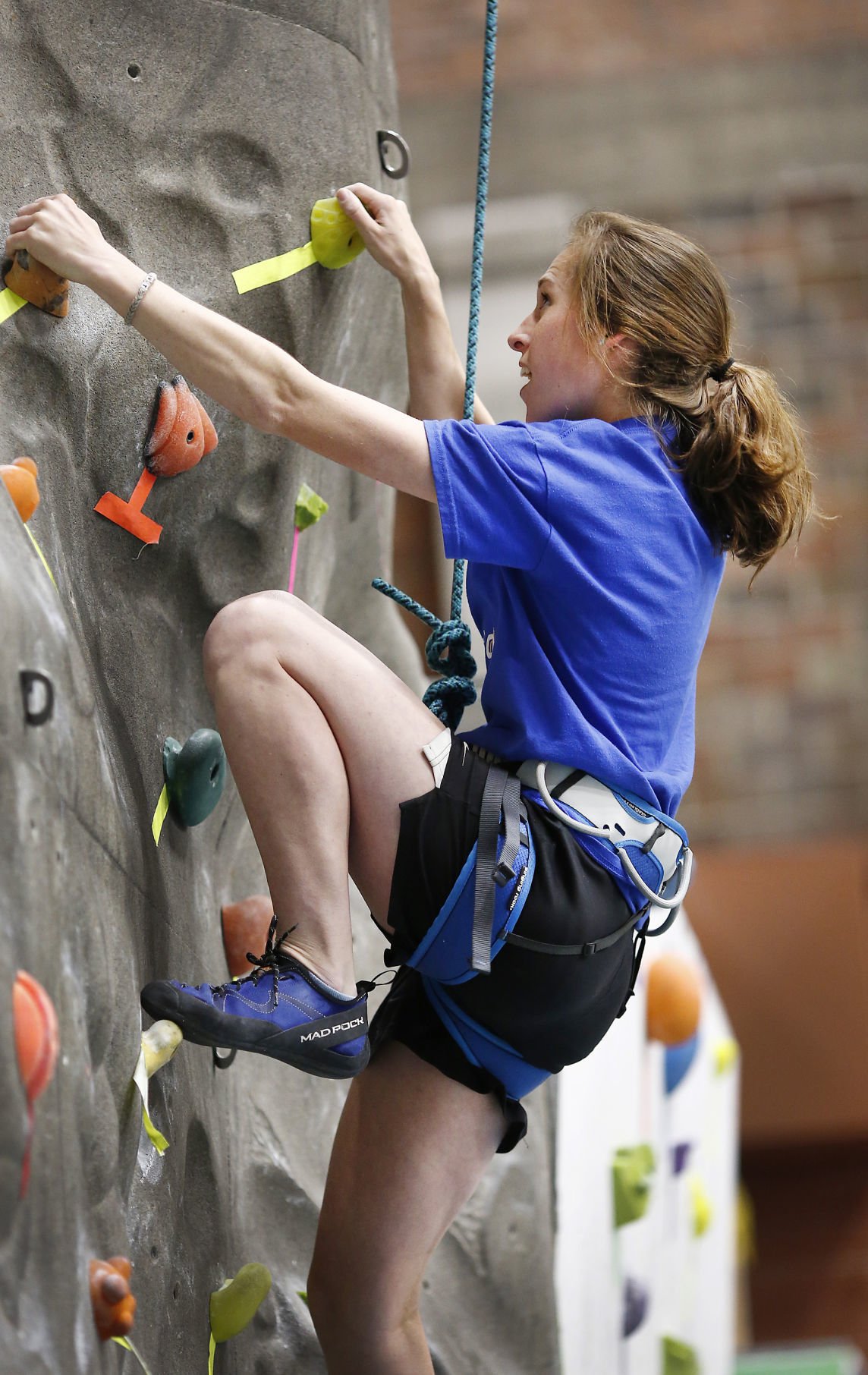 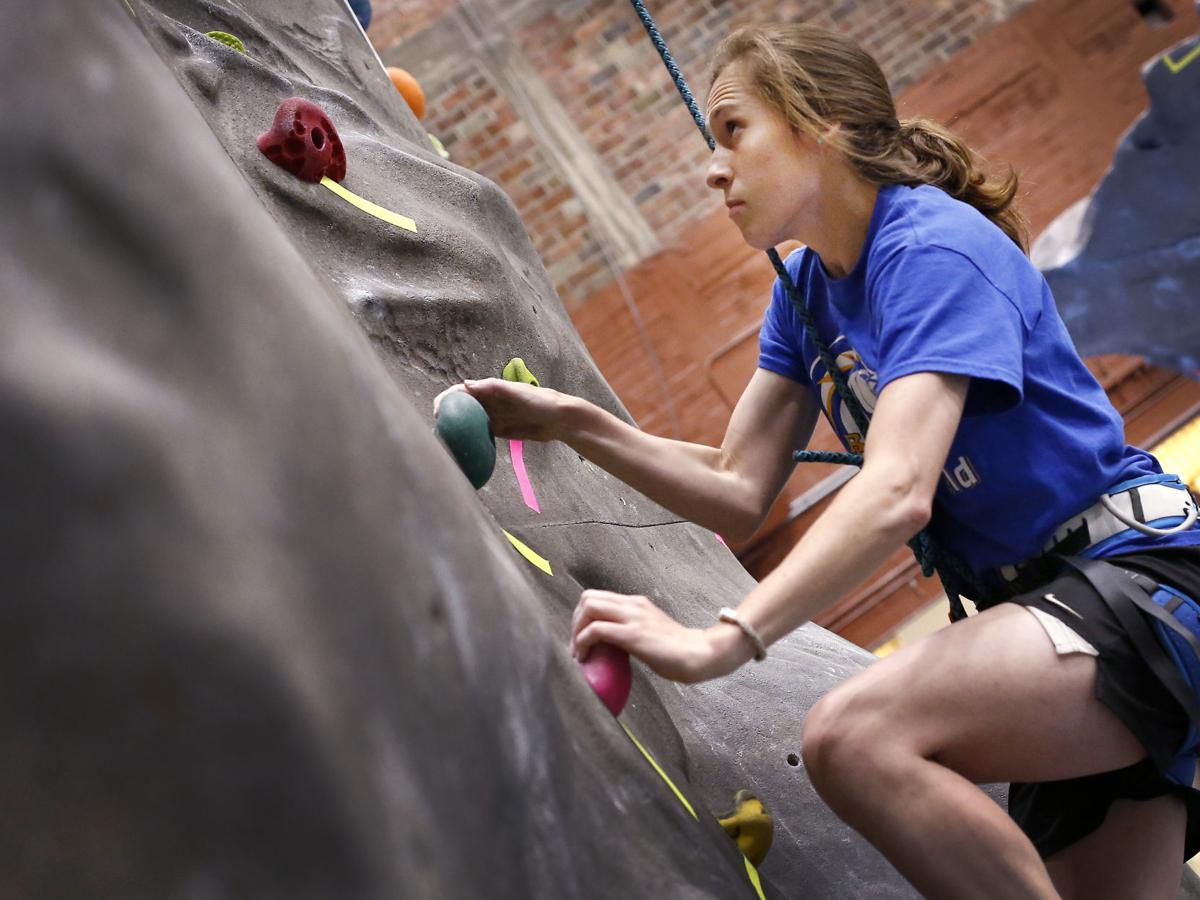 It always helps to have a steady helping of Britney and Beyonce if you want to shake away some post-holiday pounds.

At least, that was in the game plan for Rod Ketchens, a longtime Sioux City-based certified coach and owner of RK Solid.

"For a long time, I refused to work out to music," he said while preparing for a Saturday morning class at Four Seasons Health Club. "I thought it would be nothing but a distraction."

"Now I've seen the light," Ketchens said with a smile. "A little r&b, a little hip-hop and, maybe yes, a little Beyonce and Britney might be just a motivation a person needs to hit their goals."

PUMMEL OFF THE POUNDAGE

Ketchens said each 45-minute routine is non-stop movement as participants go from station to station, taking turns by kicking and pounding on punching bags, performing calisthenics and doing lunges in quick succession.

"The time flies by so fast that you don't realize what a workout you're getting," Ketchens explained as he slipped punching bags onto their oversize bases. "You're slimming down, sculpting, kickboxing and grooving to tunes at the same time."

While Ragen Cote, a Shake & Shedder for the past six months, enjoyed the health benefits of the program, she had an ulterior motive for being in the class.

"I get bored after following most exercise routines that I appreciate Rod constantly changing things up," she said. "As soon as I get accustomed to something, Rod will throw in something different."

NOT THE SAME OLD FITNESS ROUTINE

According to Bill Lane, this is an important key in any fitness routine.

"People like variety and they like new challenges," he said. "Nobody wants to keep on doing the same old thing."

He isn't kidding. The Long Lines Family Rec Center's climbing wall coordinator is constantly changing up the patterns taken by all of the facilities' Spider-Man wannabes.

"People like variety and they like new challenges," he said. "Nobody wants to keep on doing the same old thing."

But to be fair, climbing an indoor, 53-foot-tall wall or practicing your climbing techniques on a bunch of free-standing boulders is, at least for many of us, the opposite of "the same old thing."

However, Lane, who became "addicted" to outdoor rock climbing as a University of South Dakota grad student, said everybody from grade school kids to active senior citizens having been scaling great heights at Long Lines.

"People think climbing is strictly an upper-body exercise," he said, shaking his head. "Instead, you're actually using every muscle in your body, including your brain."

"You're always contemplating the next move you make," Lane continued. "There's a lot of strategy involved."

Open from 4 to 8 p.m. Monday through Fridays, 10 a.m. to 8 p.m. Saturdays and noon to 8 p.m. Sundays at 401 Gordon Drive, he said said the climbing wall is great for birthday parties, corporate meeting and for general team building.

After all, a person does find out who his friends really are when he's way up high.

"Health clubs can seem intimidating to people who are starting out," Zimmerman, a University of South Dakota occupational therapy student, said. "Shake & Shed is a class that you take at your own pace and nobody will ever judge you."

Which is good news for Courtney Voss, who is very close in achieving her goal of losing 100 pounds before her birthday in a few weeks.

"I only have two and a half pounds to go," Voss, a Siouxland Community Health Center HIV case manager, explained. "So, I'm getting close."

"My wife introduced me to Shake & Shed," he said. "That was about two years ago and, in my case, about 45 pounds ago."

Since getting fit, Nuno said he's more energetic when it comes to the couple's children, ages 4, 8, 9 and 11. Plus he enjoys spending the class time with his wife.

Um ... we can't help but notice that Nuno's wife actually isn't his Shake and Shed partner. What's up with that?

"Well, actually Sarah's prefers her friends to be her class partners while I partner up with whoever is available," Nuno said as he worked out with his "fitness wife' Nicole Coener.

Ketchens is a big believer in the buddy system, whether your fitness partner is a spouse or a sibling or a friend.

"It makes it more fun when it becomes less about exercise and more about spending time with people with similar goals," he said.

A weightlifter since he was 11, Ketchens was a competitive track and field athlete as well as a former football player at Morningside College. In addition, he's won numerous body building competitions and has been featured in such national magazines as Flex, Iron Man and Muscle & Fitness.

After more than a decade working as a jail supervisor for the Woodbury County Sheriff's Office, he became a certified fitness coach nearly 20 years ago.

"When I started, I was mainly working with athletes," Ketchens said. "Nowadays, I work with anybody at all levels of fitness."

This is actually why he created Shake & Shed in the first place.

"My students aren't training for the MMA," Ketchens said. "They are kick boxing as a way to sculpt their bodies while toning up before the warm weather comes."

GETTING RID OF THE COLD WEATHER FLAB

"People are looking for quick fixes when they should be concentrating on realistic lifestyle changes," he said.

In other words, New Year's Resolutions stick around 'till March. Healthy lifestyle choices should stick around an entire lifetime.

That sentiment is shared by Long Line's Lane, who said people drive hundreds of miles in order to do some cold weather, indoor climbing.

"I love outdoor climbing," he said. "But indoor climbing can't be beat in the wintertime."

SHAKE 'EM IF YOU GOT 'EM

Ever envision yourself a superhero. Scale new heights at the Long Lines Family Rec Center, 401 Gordon Drive. The climbing walls are open from 4 - 8 p.m. Monday through Friday; 10 a.m. to 8 p.m. Saturdays; and noon to 8 p.m. Sundays. go to Sioux-City.org for more details.

Patricia Esparza says the resolutions doomed to fail try to tackle too many things at once. Instead? "People need to make smart goals," Esparza said.

Nicole Coener and Ivan Nuno take turns hitting a punching bag during a Shake & Shed class taught by veteran fitness coach Rod Ketchens. Ketchens created the class that is geared towards people wanting to stay active in the wintertime.