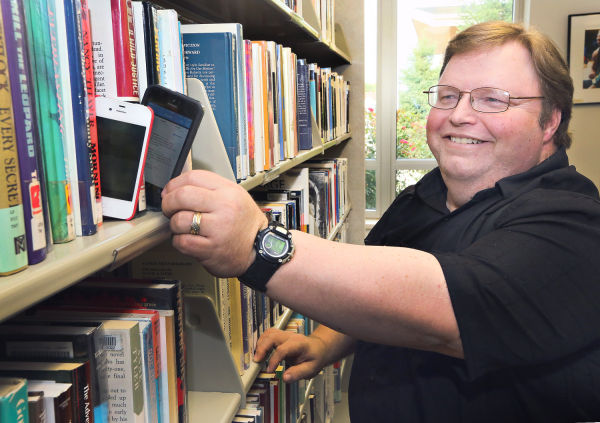 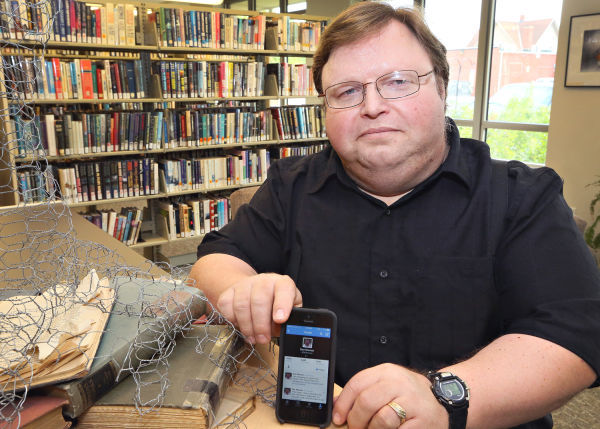 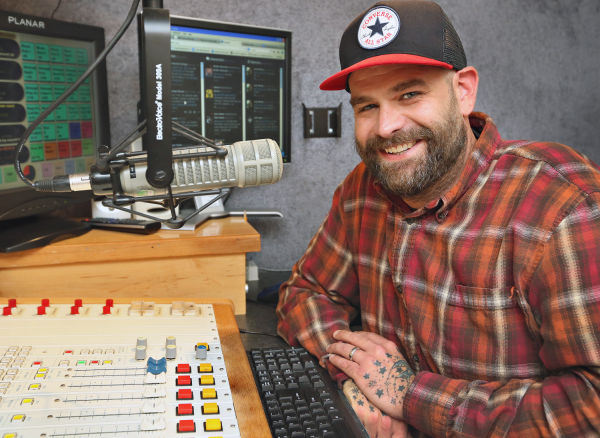 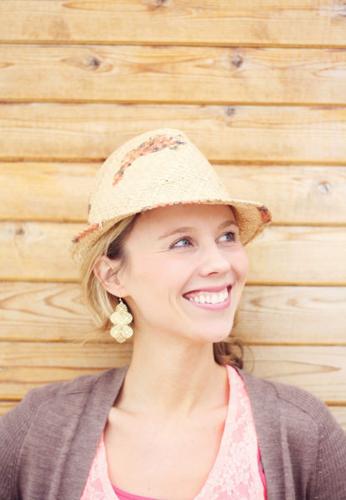 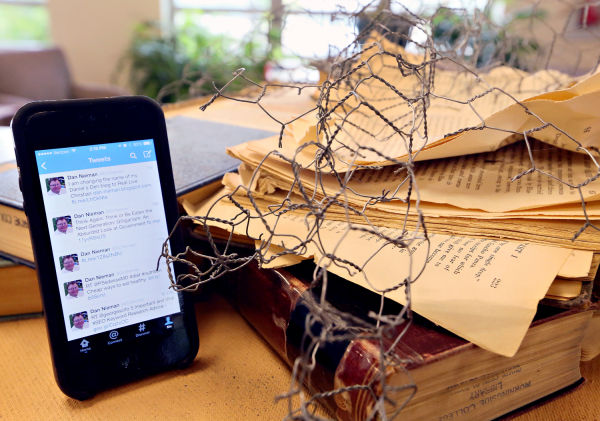 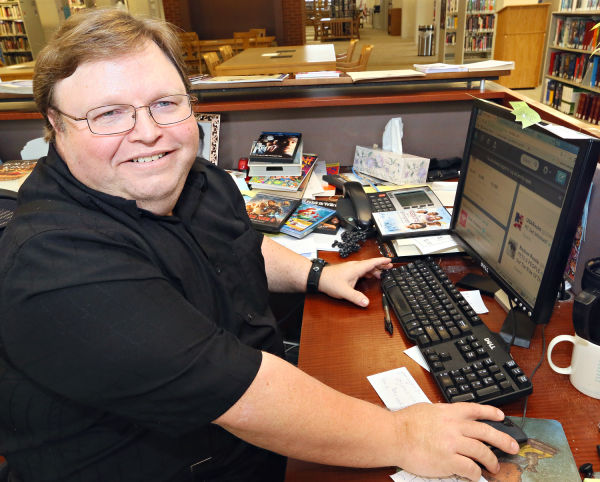 Dan Nieman serves as assistant director at the South Sioux City Public Library. Nieman says much has changed in his 14 years of work at the library. He now teaches courses in Facebook and Twitter. The South Sioux City Public Library keeps pace with technology by offering more than a dozen technology-related classes and free nights like "Tech Thursday" where patrons bring their gadgets in and learn more about their usage. 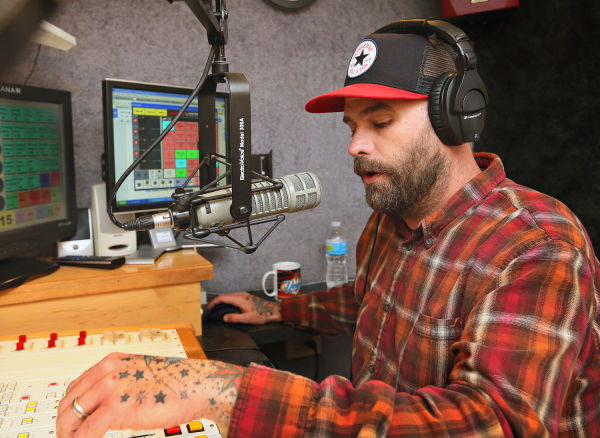 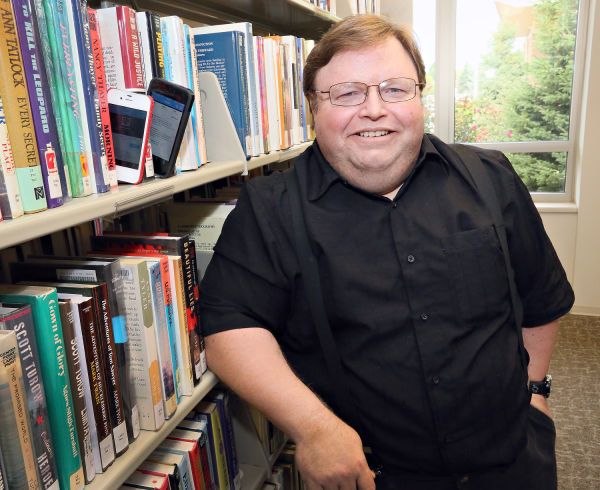 Dan Nieman, of Dakota City, is photographed during an interview at his place of employment at the South Sioux City Library in South Sioux City, Nebraska on Thursday, Oct. 3, 2013. Nieman, who's username is DLNieman, has over 12,000 followers on Twitter. (Dawn J. Sagert, Sioux City Journal) 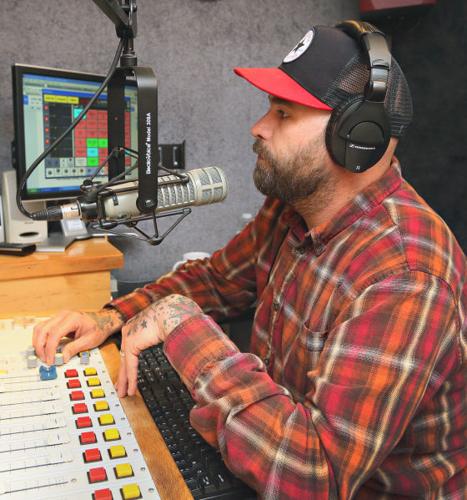 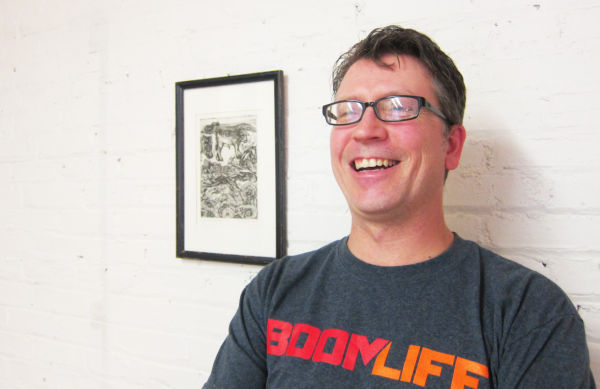 He avoids negativity and controversial topics. He never uses hashtags or lists. The 51-year-old librarian is exactly who you’d expect to be a "digital antique" -- his words.

Even though he’s exactly who you’d expect to avoid the digital highway, 12,586 Tweeters follow him including President Barack Obama.

“I do everything backwards from what they tell you to do,” Nieman, of Dakota City, said. “But somehow it works.”

Most people garner Twitter followers by talking about hot topics and controversial political debates like abortion, gay marriage and marijuana. They pick a side and start ranting.

Instead of joining that trend, Nieman said he has three rules: Be real, have fun and don’t be mean.

“Maybe,” Nieman said, “that’s why I got some of my followers.”

He thanks everyone who follows and re-tweets him, responds as soon as possible to mentions and tries to be cordial in the space he calls “the world’s largest online coffee bar or whatever kind of bar you want it to be at a time.” He even says goodnight to his followers at 1 a.m. on a Friday.

In total, between promoting his two blogs, The Antiquarian Librarian and Real Live Christian, and sharing content, Nieman said he probably posts about 20 times each day.

Many Siouxlanders stray from Twitter, according to Beth Trejo, Chatterkick founder and owner. Her company provides professional training and social media management to area businesses.

Trejo, who is the same age as Mark Zuckerberg, joined Twitter at its inception in 2006. She's since watched the site grow. But Siouxlanders, she said, seem to be afraid of the popular site. They might join, but after a few Tweets, revert back to their beloved Facebook profiles.

"We have a lot of people who are on social media," Trejo said of Sioux City, "but they aren't posting."

Maybe it's that shy conservative stereotype applied to Midwesterners. That's the assumption for people like Nieman who didn't grow up on social media, but yet outliers like him exist all around Siouxland.

Along with individual Tweeters, many local businesses and agencies have joined the social media site to get the word out. The local media is an obvious place, but the Woodbury Country sheriff (@WoodburySheriff) and Sioux City Fire Rescue (@SIOUX_CITY_FIRE) also use the site to inform the public, as Trejo said, “ for the good of the community.”

Thomas Ritchie, another Siouxland social media guru, said local high schoolers use the site as a way to communicate with friends, without their parents monitoring. Twitter, Trejo said, is the young people’s social media site of choice.

Among local Tweeters to watch is Jeff Heyer (@heyerarchy). The radio-personality at Q 102 FM joined Twitter more than five years ago as an alternative to Facebook. He was bored and annoyed by Facebook and attracted by the word limit on Twitter.

"Personally, I love the 140 characters of it," Heyer said. "Your long rambling dissertations are eliminated."

On Twitter, Heyer shares insight but on a less philosophical and more absurd level. The self-described "heavy introvert" posts about sports, #parkingfail and the small but simple occurrences of everyday life. He shares sarcasm about the political and social state of the country. He sees a co-worker's terrible parking job and shares on Instagram and Twitter.

Heyer averages about two tweets a day, more on game days, and has more than 400 followers.

Most of the time, Heyer said he uses Twitter as his source for everything happening in the world. He keeps Twitter open while he is on the air, and follows different news sites throughout the day to stay informed.

Another Siouxland Tweeter, perhaps more on the unlikely side, can be found @fathetorey. Torey Lightcap, a priest at St. Thomas Episcopal Church in Sioux City posts about spirituality, social commentary, #improvedtoys and "Breaking Bad."

"At first, I was using Twitter as a mental bulletin board," Lightcap said, "but that's really not using it fully."

Instead, his posts explore ideas that don't fit into his weekly sermon like the theology behind Walter White's decent into darkness and struggle to find his morality.

"Why would a pastor want to say away from that?" Lightcap said. He uses social media to give a personal face to the church. Lightcap strives to show that priests and pastors live in the same imperfect world, try to live happily and do good and are normal people in society and counter the stance that "the pulpit is located six feet above contradiction."

But neither @heyerarchy nor @fathertorey match @DLNieman in followers. All three Siouxlanders stray away from the controversies Twitter is known for weighing.

Instead they share interesting and common threads that their followers can relate to and enjoy.

And, who doesn’t enjoy seeing, “Great to have you following”?

“That’s the way to build your cred: Be a real person and be real all the time,” said social media professional, Thomas Ritchie, @CreativeThomasR. He’s the founder of the Creative Fire in Sioux City.

“It would be hard to have a conversation with someone who you texted and then two weeks later, they texted you back,” Ritchie said. “Twitter is a text message conversation but it’s with the world.”

“To truly maximize your potential,” Ritchie said, “you need to engage with people in that world and share information that is important to them or insights or things that you enjoy.” Ritchie’s business is social media, so he Tweets about social media. But he also Tweets about cycling, music and food.

“If I tweeted all day about the services my company offers,” he said, “I would probably have 17 followers.” Instead, he has more than 1,800. “There are people who Tweet a lot of crap. I tweet a lot of sandwich pictures.”

On Twitter, you should use the hashtag and arroba (the 'and' sighn) to maximize your impact. “It’s sort of like you don’t walk into a room with a bunch of nuclear physicists and talk on a third-grader level,” Ritchie said. “You have to use the tools that are available.

But that doesn’t mean use 20 plus hashtags. “Use one or two that are relative and go from there,” Ritchie said.

When you tweet something, imagine you are screaming at a crowded room. Your future boss, crush and grandma are reading everyone you put on there, even if you only have two followers. Everything on Twitter is still searchable, maybe even if you delete it.

Marketing and advertising manager at Sioux City Ford Lincoln. Also a foodie and former journalist. Fan of music and nature.

Why? Tweets about hyper-local happenings in Sioux City from CableOne outages to Diamond Thai curries.

Money on my mind. Soon to be LSU tiger. #lsu #tigers

Why? If you want to get an in-depth look into the head of a teenage girl at Bishop Heelan Catholic High School, you should definitely follow this girl. (1,600 Tweeters do.)

Sioux City (Iowa) Journal pol reporter since 2002. You also get my pop culture faves. Regarding RT's, "Forever in debt to your priceless advice," as Kurt sang.

Why? Local political information hits you 24/7.

Why? Silly but entertaining thoughts from the day-to-day struggle of a Morningside College kid.

What would you do when the president comes to town and you have only a few days' notice?

Dan Nieman serves as assistant director at the South Sioux City Public Library. Nieman says much has changed in his 14 years of work at the library. He now teaches courses in Facebook and Twitter. The South Sioux City Public Library keeps pace with technology by offering more than a dozen technology-related classes and free nights like "Tech Thursday" where patrons bring their gadgets in and learn more about their usage.

Dan Nieman, of Dakota City, is photographed during an interview at his place of employment at the South Sioux City Library in South Sioux City, Nebraska on Thursday, Oct. 3, 2013. Nieman, who's username is DLNieman, has over 12,000 followers on Twitter. (Dawn J. Sagert, Sioux City Journal)