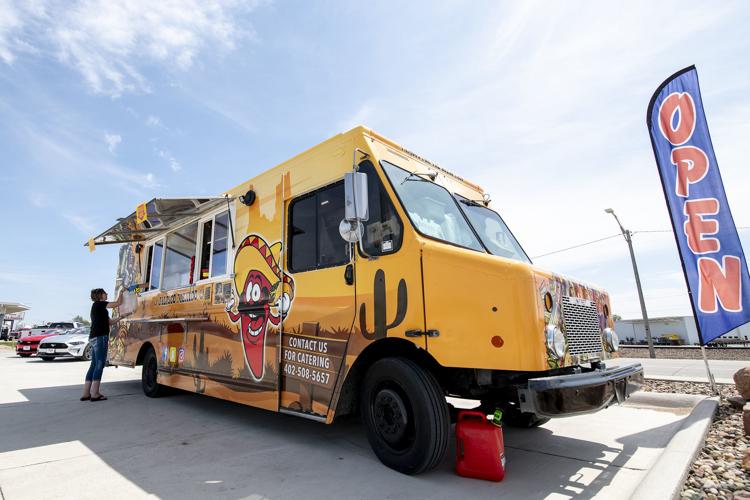 Kari Kopperud picks up an order of burritos and nachos for her family Daga's On Wheels from Daga's Mexican Grill in Le Mars, Iowa. 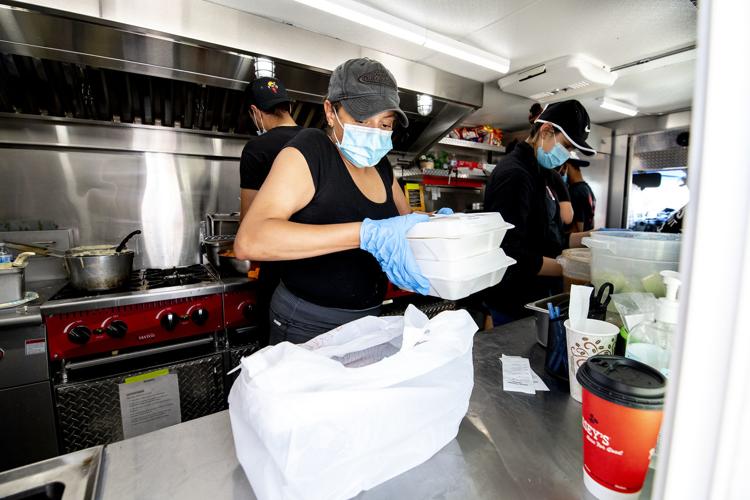 Charity Fenceroy bags an order of food at Daga's On Wheels in May. 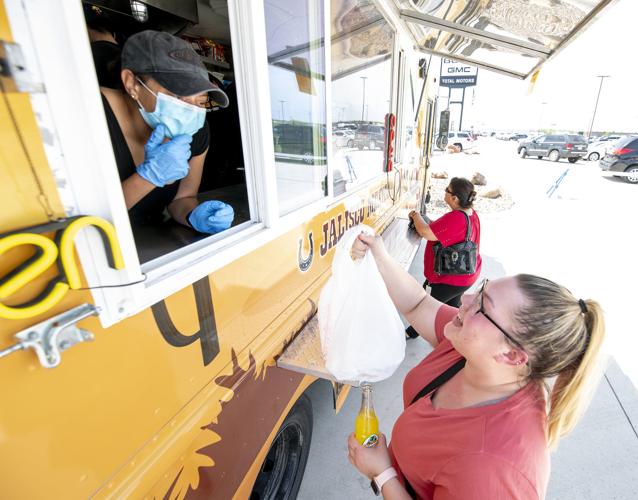 Bailey Walton, right, picks up her order from Charity Fenceroy, left, at Daga's On Wheels.

The owner of Daga’s on Wheels says business has been up since the coronavirus pandemic changed the dining scene in Siouxland.

"Sales have increased by 110 percent,” owner Tyson Sanchez said. “ What we’re experiencing is something we have never experienced in the last four years with the food truck."

Sanchez said the food truck is usually at the Morningside public library on Tuesdays, Total Motors in Le Mars on Thursdays, and at the farmers market on Saturdays. Other locations are determined on a day-by-day basis.

“I’m looking forward to having fun in the new food truck and seeing a lot of the familiar faces of all our customers,” Sanchez said. “Just making them happy, just serving our food, and putting a smile on their faces.”

Daga's actually started as a taco shop in Winnebago, Nebraska, when Sanchez was 19. He did it because he wanted to give his grandparents a chance to do what they love -- cooking.

“They had the cooking skills, and I had the desire, motivation and brains to figure out how to run a business,” Sanchez said. “And just us working together, we did the restaurant for a total of eight to nine years.”

After five years, Sanchez opted for a food truck since there wasn’t a taco scene when he first started, and he thought it would be fun and unique.

“I just took a leap of faith,” Sanchez said.

Sanchez said that he was among the first involved with Food Truck Fridays. Once the concept took hold, he had a platform to expand his base and brand.

Because of the success of the food truck, Sanchez decided to close the physical restaurant about a year ago. He said that he does the food truck full time from March to November.

“Summers are great!” Sanchez said, “ We have a huge clientele, a huge following and we stay really busy.”

Sanchez said that because there's only one truck, they have had to decline some catering.

Though with everything going on with Covid-19, Sanchez was a little nervous going into this season. He purchased a new truck and knew the season was not going to be like others.

“It’s completely the opposite," he said. "We're excited to put out food and make people happy."

Meal time: 12 stories about food and drink in the Journal this year

Enjoy a savory spin through the biggest food news of 2020 in Sioux City with our special collection of restaurant, meal and drink coverage.

Truck tastes: 6 stories about Sioux City food trucks in the Journal this year

Enjoy a gourmet glimpse at some of the hottest food on wheels in Sioux City with this special look back at our recent food truck coverage.

Kari Kopperud picks up an order of burritos and nachos for her family Daga's On Wheels from Daga's Mexican Grill in Le Mars, Iowa.

Charity Fenceroy bags an order of food at Daga's On Wheels in May.

Bailey Walton, right, picks up her order from Charity Fenceroy, left, at Daga's On Wheels.