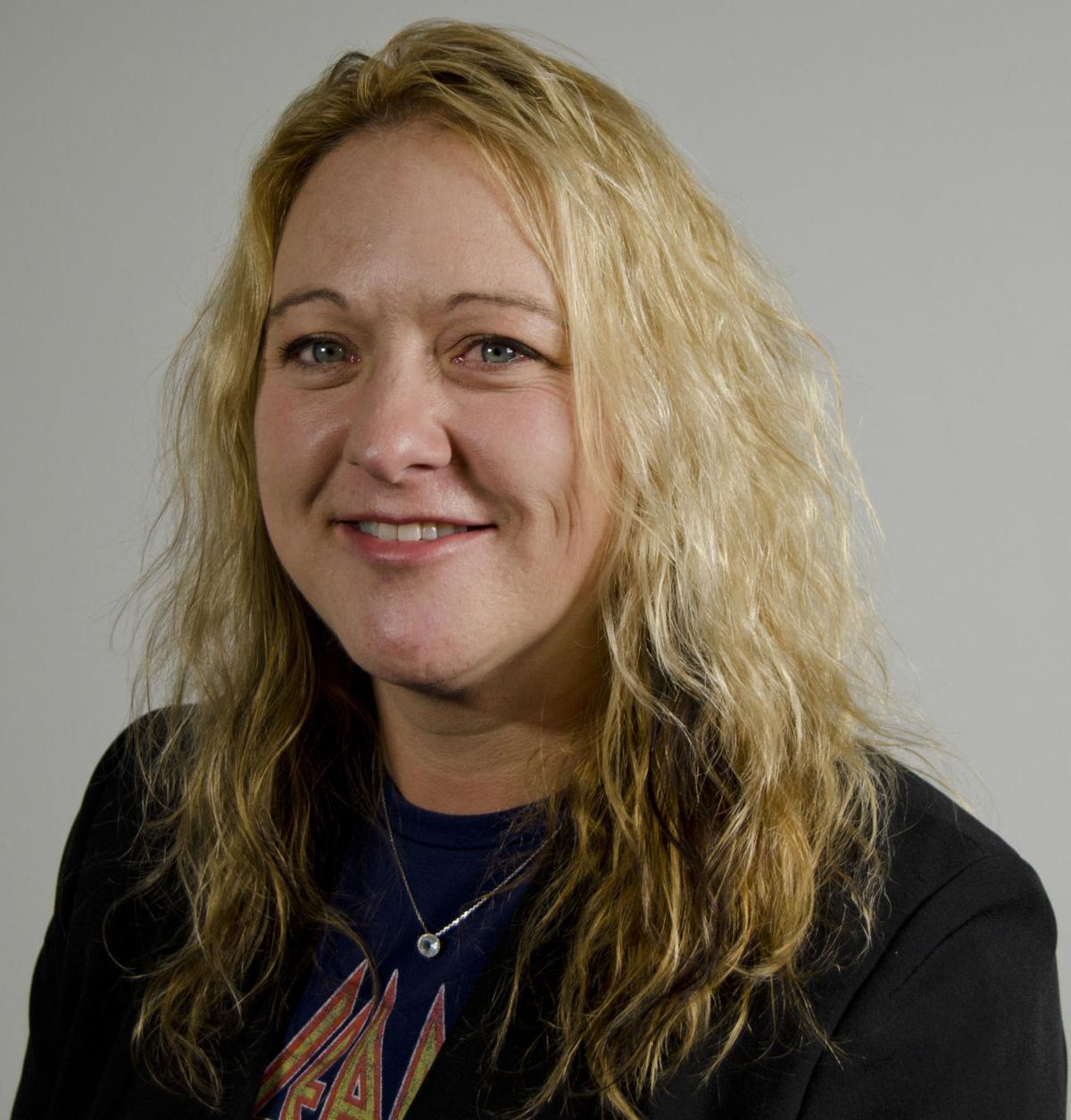 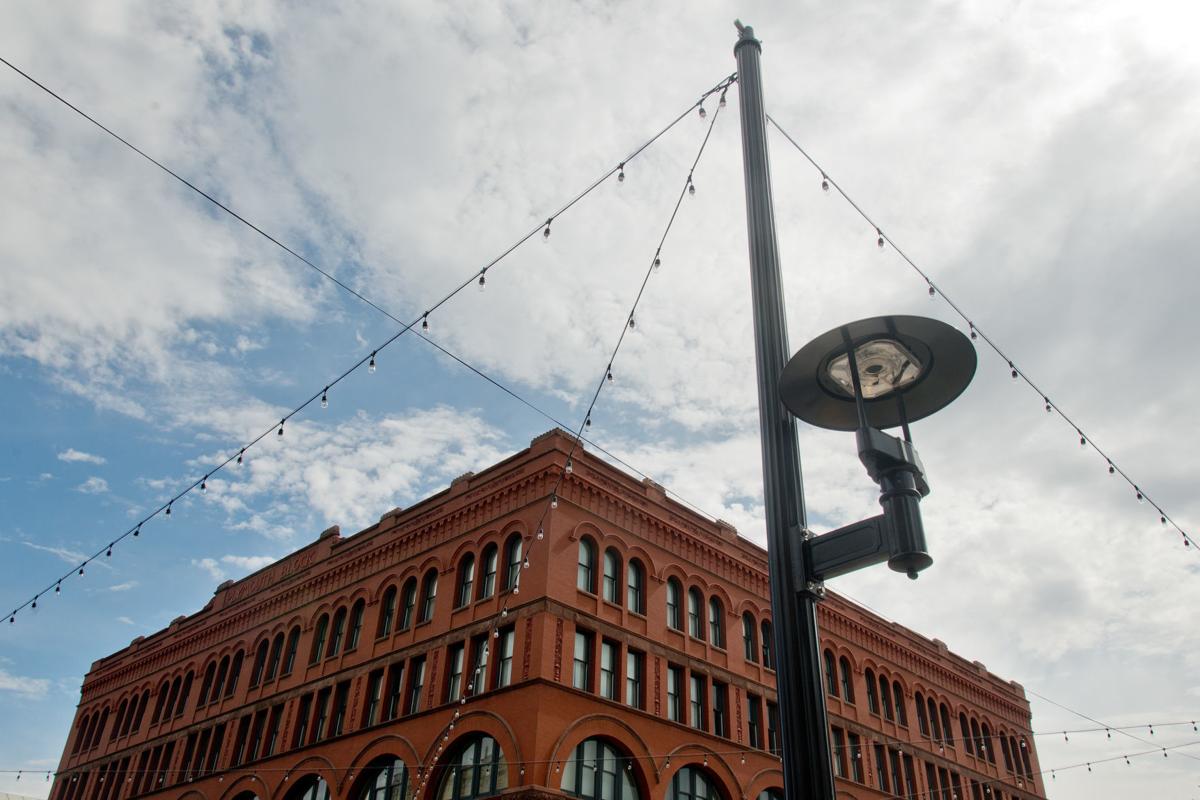 Newly installed festoon lights are seen at the intersection of Fourth and Court streets in downtown Sioux City Friday.

Over the course of the last several years, downtown Sioux City has had a series of facelifts in the form of art installations popping up around the urban area.

The organization responsible for much of that is Downtown Partners, with Ragen Cote who has been at the helm as the executive director since 2010.

Cote, who moved to Sioux City from Dubuque when she was 12, is a graduate of Morningside College and the mother of two high-schoolers.

Cote’s mission, as well as the mission of the organization she works for, is to get Sioux City’s downtown district to prosper.

“We want to create a thriving and vibrant downtown,” said Cote. “We want to be a place where people want to be and where business happens. Downtown Partners helps with all of that. We are intended to be a complement to the efforts of the city of Sioux City. We have a district we serve. We want downtown to be booming.

“When I say complement the city, I mean that we complement their services as well as their initiatives and efforts. In the same breath, we also help define what those are. How we do that best is to work with stakeholders.

“When I came in in 2010, there had previously been some communications issues. One of the first things we had to do was make sure that all of our 500+ property owners were listened to. I had to visit with all of them to see if what they wanted to see happen in downtown was actually happening. Our mission was defined by them.”

The organization has been around since 1988 and gets revamped every five years, Cote explained.

“When it came to progressing downtown, we needed to make sure we had a seat at the table,” she said. “We also identified who we needed at that table, then we started to be the table. Now we bring everyone together when we have a project happening. From those conversations we saw who needed to be involved and who had the passion to be involved.”

Recently, Downtown Partners took another step to make downtown look a little nicer and add light to a popular, high-traffic intersection. The organization strung lights over the intersection of Fourth and Court streets. Future plans include expanding this new street lighting, making downtown feel like a safer place at night.

“We were talking about public safety and the perception of safety,” said Cote. “One of our biggest things is connecting our entertainment districts; connecting Historic Fourth with Historic Pearl. There is plenty of stuff in the middle, but it needs to be connected better so that people feel that walk-ability. We started talking about ways of doing that, and one of the ways was lighting.

“We originally wanted to string the lights from building to building on the two blocks of Historic Fourth. Sadly a structural engineer deemed that the buildings couldn’t support that kind of weight. We then came up with the festoon lights. Now we’d like to connect the other area, and we are about to do the same sort of lighting at Fourth and Pearl.”

Eventually there will be enough lighting to make people feel comfortable walking from one side of downtown to the other via Fourth Street.

Art is another vehicle for change.

“Art is, in general, a really cool and grassroots effort that is vital for a downtown,” said Cote. “It’s not something you can necessarily control, but you can help inspire it. When we put up the big murals, it was an intentional way to inspire more art. On purpose, we got artists from outlying areas; we even got international artists from Argentina to paint the buffalo and an artist from Des Moines did the mural on Historic Fourth. We got a lot of questions from local artists asking why we didn’t go with local talent. There’s a reason: I wanted these pieces to inspire local artists to do what they want downtown.”

So what is Cote’s vision of the future of downtown? What other projects might Downtown Partners be planning for the upcoming years? One of these projects includes wayfinding signage for cars, and also people walking the streets of downtown.

“It’s vehicular and pedestrian signage directing people to the different attractions around downtown,” said Cote. “Over the years, we have worked with hundreds of stakeholders, experts on wayfinding and city officials. We are completing the final bit of funding, and are planning on installing the signage in the springtime.

“We want it (downtown) to thrive and be successful. To be successful we need people. We constantly have to be moving. Downtown housing is probably the biggest thing downtown that will be a motivating factor for development downtown over the coming years. We need a grocery store down there, heck, we could get an urban Target if we have a large enough amount of people living down there.”

Siouxland Strange: 'I told you it was stolen'

After being pulled over in Sioux City on suspicion of driving a stolen vehicle, a woman called someone to say she was headed to jail. This person's response: "I told you it was stolen when I gave it to you."

1. From Soldier Field to Anthem's Stage

It always helps to have a steady helping of Britney and Beyonce if you want to shake away some post-holiday pounds.

Question of the week

'Do you think Iowa should legalize the recreational use of marijuana, and why?'

My favorite story I ever did was an interview with Randy from "Trailer Park Boys." The actor that portrays Randy agreed to do the interview in…

Need something to do in Sioux City this weekend? We have you covered.

Ari bids his farewell to The Weekender

Readers, with a clear mind, yet a heavy heart, I would like to tell you that I am stepping away from The Weekender.

Newly installed festoon lights are seen at the intersection of Fourth and Court streets in downtown Sioux City Friday.