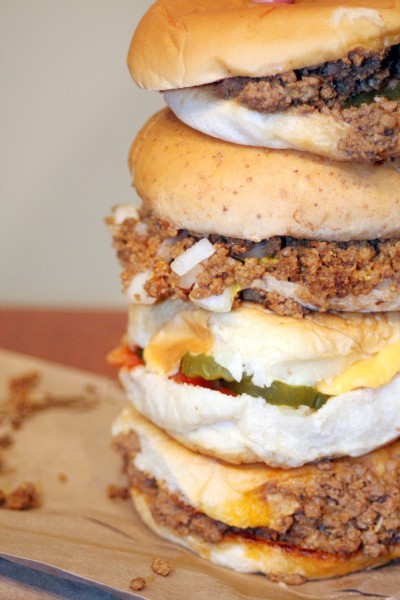 Sandwiches from various Sioux City locations stacked up for the most meaty view possible. 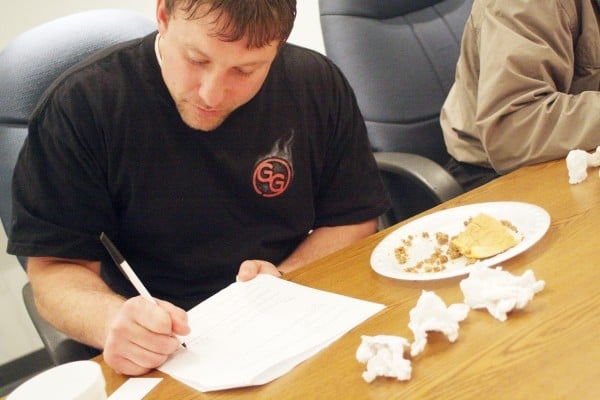 Jeremy Uhl took his job seriously at the Weekender taste-test event to decide which is the best loosemeat in town.

Is Sioux City the home of cutting-edge cuisine?

﻿Well, in the case of one fast food staple, yes it is.

According to legend, the loosemeat sandwich – crumbly globs of ground beef served sauceless, inside a hamburger bun – was created by a line cook at Sioux City’s Ye Olde Tavern back in 1924, anointing the one-of-a-kind concoction a tavern, named after his restaurant.

And for more than 80 years, a battle has raged on the loosemeat wars. Who has the best loosemeat: We, the rugged Westerners of the Hawkeye State or those snobby elitists on the Iowa’s Eastern side?

Alas, the battle’s recently become much more intense as a Maid-Rite Diner – the home of the Maid-Rite loosemeat sandwich – has opened its doors at 2509 Hamilton Blvd. in Sioux City.

So the Maid-Rite will now not only be competing against taverns made at its supposed birthplace (Gus’ Family Restaurant, 1322 Jackson Street, located at the site of the original Ye Olde Tavern, which has continued to make a loosemeat sandwich) but also with long-standing loosemeat variations like the Charlie Boy from the Miles Inn (2622 Leech Avenue) and Tastees from Tastee Inn & Out (2610 Gordon Drive).

An unapologetically Iowa dish, the tavern has been called other names in other regions of the country. But, most are made roughly the same way: ground beef is prepared loose (as opposed to formed into a patty like a burger) and seasoned; then, it’s shoveled up by an ice cream scoop and dumped onto a hamburger bun that’s been schmeared with yellow mustard and, perhaps, an onion.

What can be easier than that, right?

The simplicity of the meal, in fact, is why taverns are so popular in school lunchrooms and at church get-together’s.

But the relative ease of its preparation should not be an indicator of the complexity of flavors contained within the two-halves of a hamburger bun.

When done right, a tavern can be a cacophony of flavors. The seasoning of the beef can make the sandwich salty, spicy or peppery, while the mustard give it a distinct tang and the pickle a terrific tinge of tartness.

A tavern versus a sloppy joe

OK, what’s the difference between a tavern and a sloppy joe, you ask?

A sloppy joe – popularized by novelist Ernest Hemingway after the sandwich turned up on the menu at his favorite haunt, Key West, Fla.’s, Sloppy Joe’s Bar in the mid 1930s – is simply loosemeat that’s been sweetened by a tomato sauce.

Devotees of the loosemeat describe taverns as being “a sloppy joe without any of the slop.”

The sloppy joe made its way out of barrooms and into the American dining rooms when housewives discovered the recipe at the height of WWII.

With ground beef rationed during the war, homefront home cooks were always looking for ways to stretch their meat supply. Adding a tomato sauce, they figured, made their ration of meat last a bit longer.

Inflation and the high cost of meat were the motivation behind Hunt’s introduction of its Manwich Sloppy Joe Sauce in 1969. The product’s combination of tomato paste, dehydrated onions, oregano, garlic, and red and green peppers in an aluminum can proved popular with busy housewives wanting to serve something fast and cheap to a generation of post-baby boomer kids.

Yet tavern connoisseurs know tomato sauce masks the taste of the meat, rather than enhance its flavor.

Yup, you heard us right. In this health-conscious age, the tavern is a throwback to an earlier time.

Though the fat is drained from the loosemeat, a tavern should still be moist enough to make your cardiologist concerned.

An Iowa tradition for more than 80 years

Loosemeat’s lack of pretension is, in large part, the reason why it has endured for as long as it has.

The French can have their fancy baguette or coq au vin, the Brits their bangers and mash, but Iowans will always have a soft spot in their hearts (and belly) for the simple, little sandwich first made, according to legend, inside a small restaurant kitchen in Sioux City 87 years ago.

A tavern lover's who's who

Who is it: Gus' Family Restaurant, 1322 Jackson Street, the birthplace of the original Ye Olde Tavern tavern.

Nod to authenticity: Although the restaurant has gone through many changes of ownership, the tavern has consistently remained on the menu through the years.

Who is it: Maid-Rite Diner, 2509 Hamilton Blvd. -- with more than 70 locations in Iowa, Nebraska, Illinois, Minnesota, Missouri and Ohio -- is, arguably, the country's largest proponent of loosemeat sandwiches.

Nod to authenticity: According to its website, the chain's Maid-Rite continues to be made using a special cut and grind of meat and selected blends of spices for the sandwich that company founder Fred Angell created nine decades ago.

Who is it: The Miles Inn, 2622 Leech Avenue, made famous by its signatre Charlie Boy.

Date of loosemeat sandwich creation: Around 1950.

Nod to authenticity: Originally opened as a grocery store in 1925, original owner Charlie Miles turned the Miles Inn into a bar in the late 1940's. The peppery Charlie Boy -- named after Miles' son Charlie, Jr. -- became a hit with nearby packing plant and stockyard workers who frequented the establishment.

Nod to authenticity: The restaurant's signature Tastee landed it on Gourmet Magazine's Top Ten list of drive-in restaurants in the United States.

A tavern by many different names

Ask a person from a different part of the country about a tavern and you'll be sure to get some curious looks.

That's because a loosemeat sandwich (in the form of a tavern or its saucy cousin, the sloppy joe) is known by many different names across the country.

Here are the names of some of our favorite variations on the old-fashioned tavern:

-- Yums Yums in parts of Nebraska

-- Wimpies in Northeastern Pennsylvania and, yes, they were named after Popeye's ravenous pal Wimpie (who's full name happened to be J. Wellington Wimpie, BTW)

There are also some international varieties of the All-American loosemeat

-- Savoury Mince Roll, in Australia, sloppy joe ingredients of meat and sauce are poured into the pocket of a pita roll, instead of a more traditional hamburger bun.

Iowa's gift to the culinary world got nationwide exposure when Roseanne Barr (then Roseanne Arnold) had her character open up a loosemeat restaurant called the Lanford Lunch Box on the popular "Roseanne" television series in 1992.

Apparently, the idea of opening a fast food joint, specializing in taverns, appealed to both Barr and her then-husband, comic Tom Arnold.

In 1993, the couple opened Roseanne & Tom's Big Food Diner in Eldon, Iowa, a few miles away from Tom Arnold's hometown of Ottumwa.

The restaurant closed shortly after the Arnolds divorced in 1994. According to TVAcres.com, the building which was home to loosemeat eatery was donated to the City of Eldon the following year.

Where else can you get taverns

Before you make the nasty phone call or write the indignant letter to the editor, we know there are other fine eating establishments that make and sell taverns that are nothing less than stellar.

They include Bob's Drive-In (Highway 75 South, Le Mars) -- which has been dishing out loosemeats and chili dogs since the early 1950's -- and the Billy Boy Drive-Thru (2328 Riverside Blvd., Sioux City) -- where you can get loosemeat served in either a hamburger bun or a big, honkin' hot dog bun.

If you've got a hankering for taverns, the Weekender recommends you to share the love.

Why: "This one is lacking nothing. It has all the goods."

Why: "The spices and the flavor are lacking with this one.

Best quote: He described the Maid-Rite as being "full and plump."

Why: "Good all the way around."

Why: "The bun was mushy and it could have used more spice."

Best quote: He would only eat a Gus's tavern if he was "really, really hungry."

Why: He liked both of their flavors the best and was impressed with the Maid-Rite bun

Why: “This one is too spicy in my opinion.”

Best quote: In his initial impression of Gus’s he thought the smell seemed “pretty fine.”

And the winner is: The Miles Inn Charlie Boy

To say that Denise Bailey grew up in the restaurant business would be an understatement.

Origin of Sioux City sandwich up for debate

When it comes to loosemeat sandwiches, it wouldn't be a stretch to say they're an Iowa favorite. They're on TV (mentioned on "Roseanne," set in Iowa) and served at potlucks, school lunches and drive-thru windows across the state.

Sandwiches from various Sioux City locations stacked up for the most meaty view possible.

Jeremy Uhl took his job seriously at the Weekender taste-test event to decide which is the best loosemeat in town.
© Copyright 2021 Sioux City Journal, 515 Pavonia St. Sioux City, IA | Terms of Use | Privacy Policy
Powered by BLOX Content Management System from TownNews.com.
You don't have any notifications.