Become a Member
Read Today's E-edition
Share This
Want to know how to give holiday cocktails a modern spin?
0 Comments
Share this
1 of 6 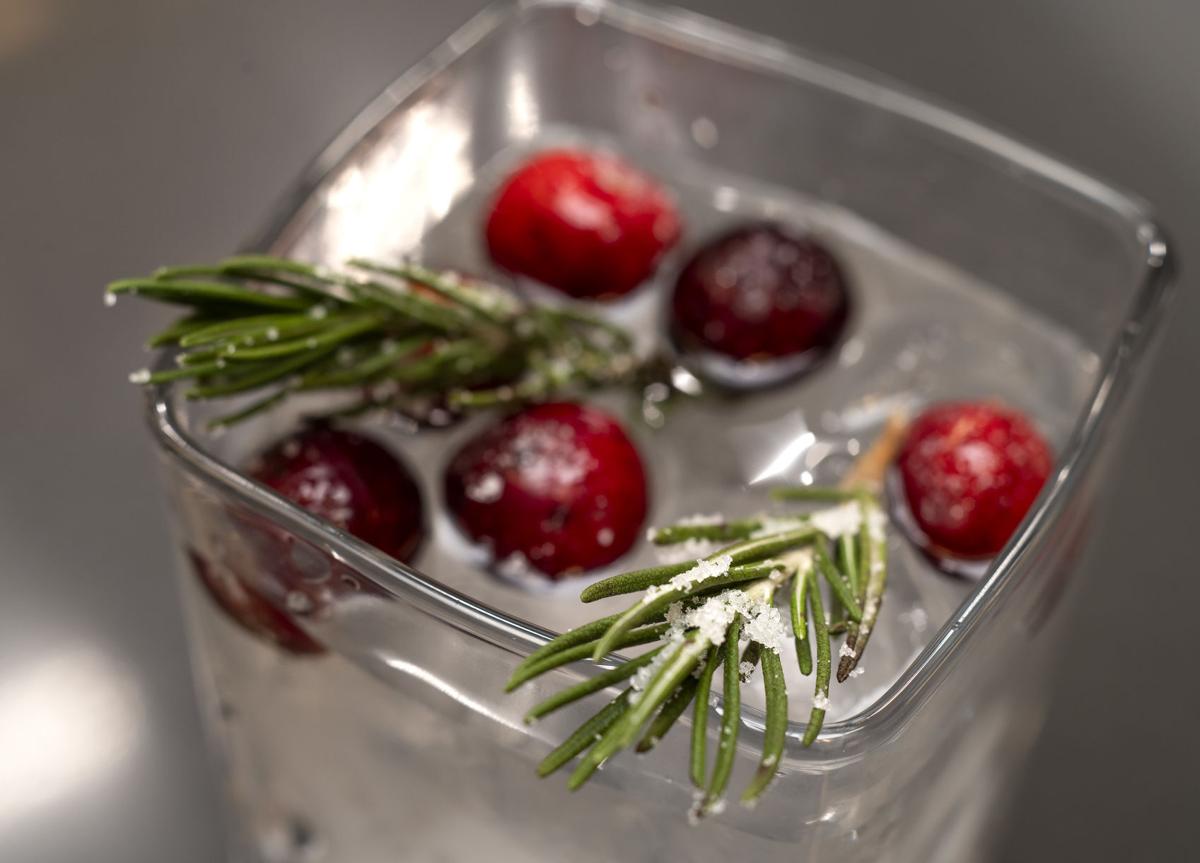 A "Winter Wonderland" drink mixed by Chef Michael Gasaway, culinary arts instructor at Western Iowa Tech Community College, is shown. The drink is made with gin. lime juice, and a rosemary simple syrup. 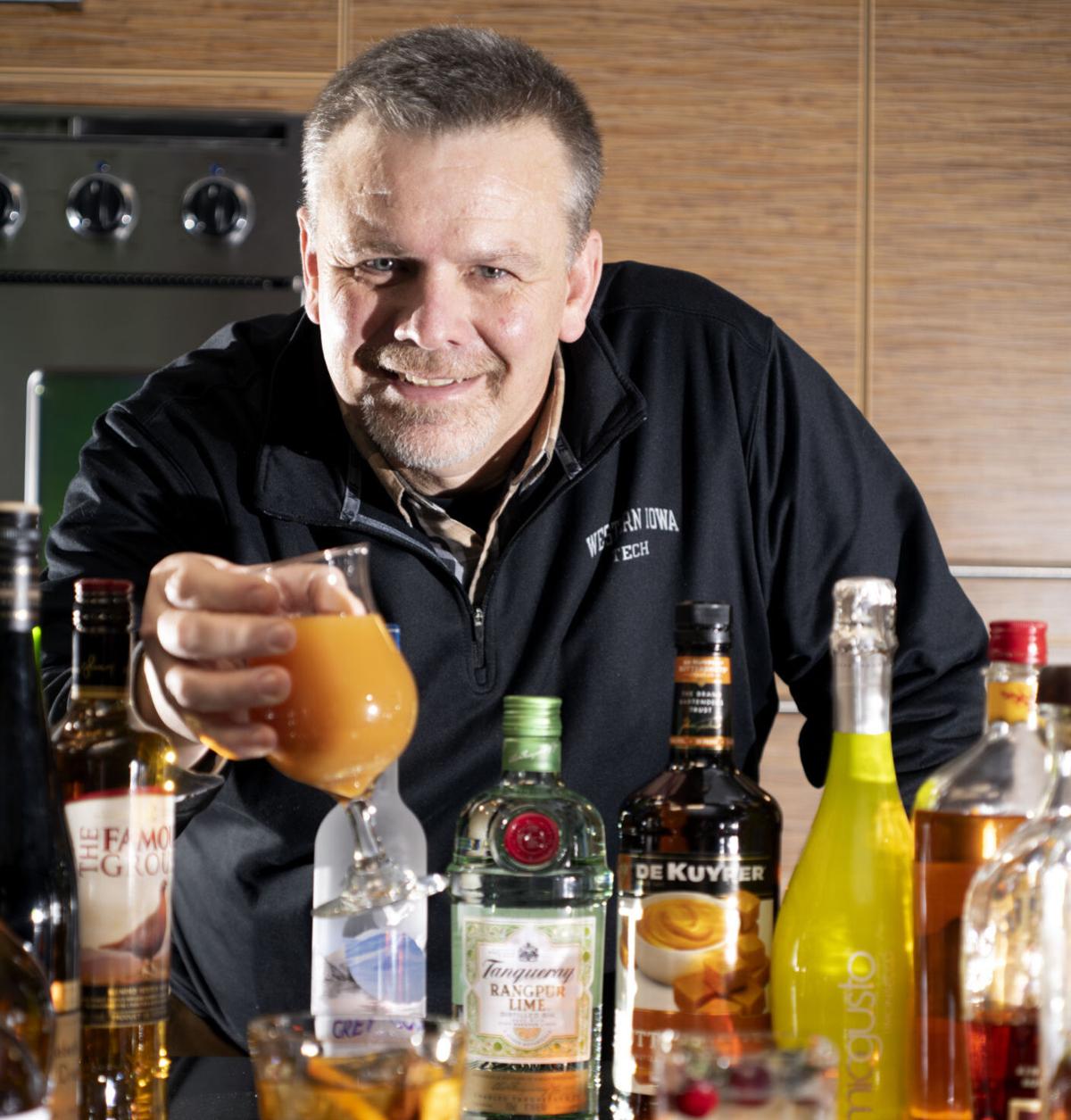 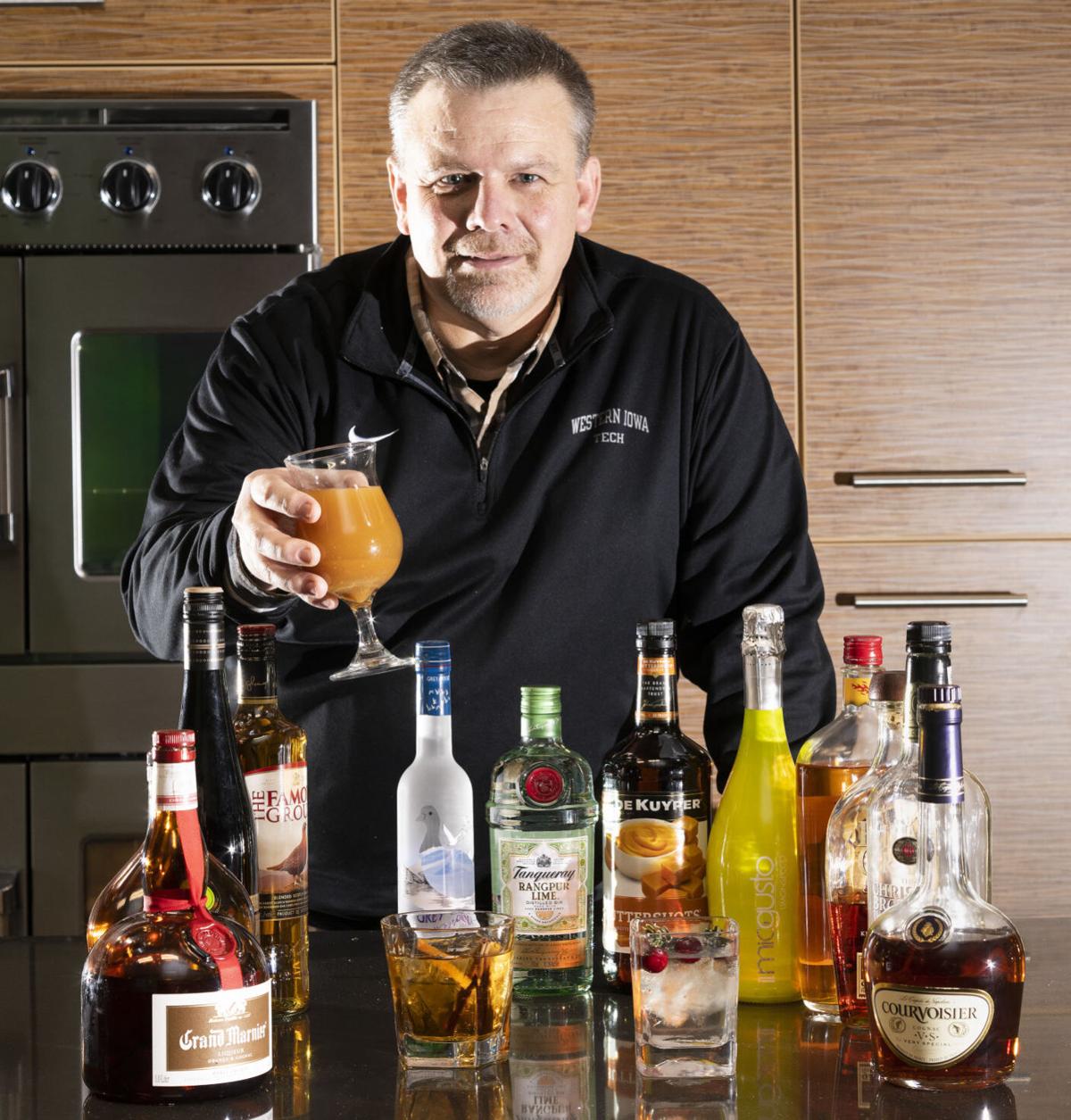 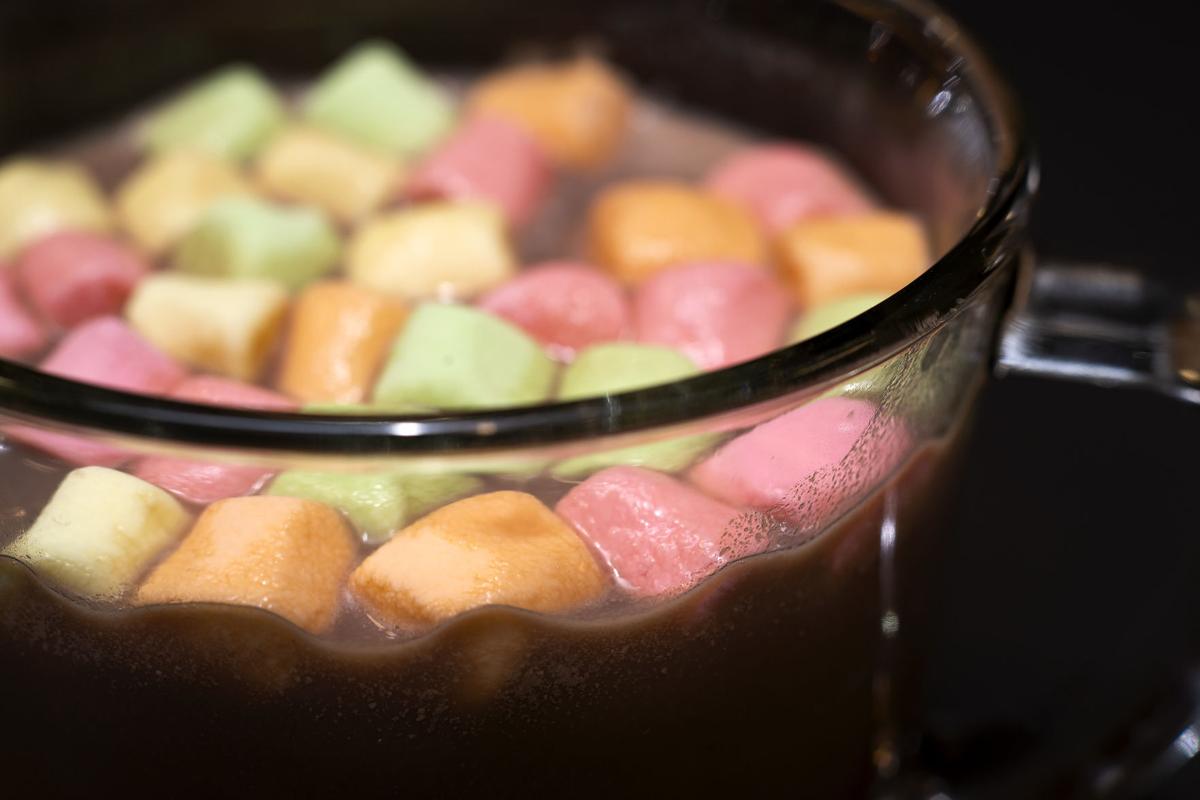 Chef Michael Gasaway, culinary arts instructor at Western Iowa Tech Community College, peels an orange to make a garnish for a "Fireside" drink made with whiskey and a walnut simple syrup 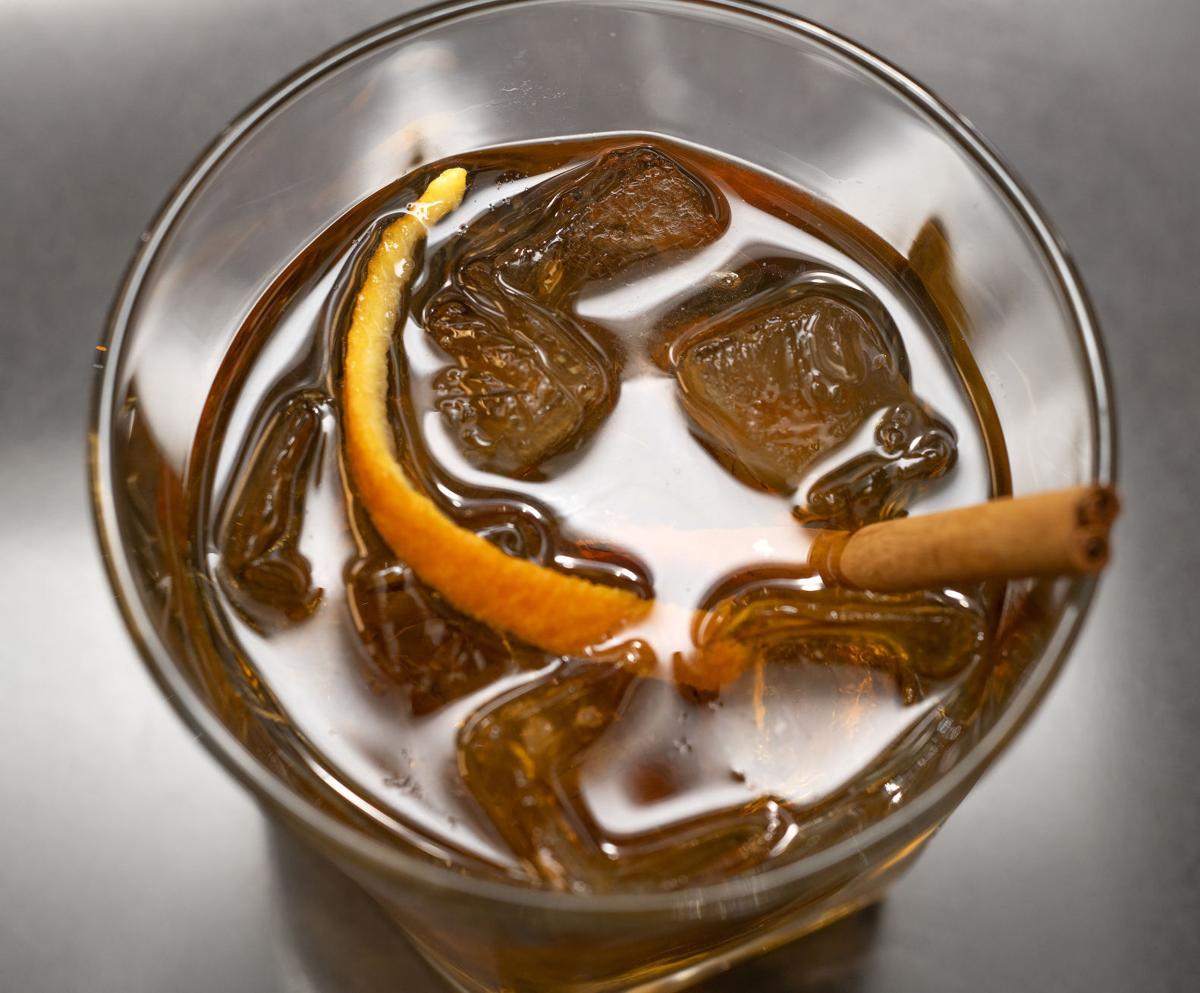 A "Fireside" drink mixed by Chef Michael Gasaway, culinary arts instructor at Western Iowa Tech Community College, is shown. The drink is made with whiskey, cinnamon and a walnut simple syrup.

A neighbor once gave Chef Michael Gasaway a book of drink recipes.

The book, originally published in the early 1960s, was full of cocktail ideas for a country that still enjoyed a meat-and-potatoes diet, watched the "Ed Sullivan Show" every Sunday night, and shared a JFK-level of optimism about America.

"This was a time when real 'Mad Men' and their wives would dress up and entertain friends and family at their homes," Gasaway, a culinary arts instructor at Western Iowa Tech Community College, explained. "I could almost picture guys in skinny ties when I looked through the book of cocktails."

"For many people, the holidays start at home," Gasaway said. "The foods and the drinks that we crave aren't necessarily of our generation. Instead, they are the ones we remember our parents or, even our grandparents making ever year."

He has a point.

We love our pot roasts, pumpkin pies and turkeys with all of the trimming because they reflect a nostalgia which becomes more personal every time Thanksgiving, Christmas and New Year's Day roll around.

It is also true for the special drinks of the season.

Whether it is eggnog, wassail or hot buttered rum, the holidays feel more jolly with such throwback drinks.

"We want to feel warm and toasty on a cold winter's night," Gasaway said. "A holiday drink can do the trick like nothing else."

However, both Gasaway and Templin wanted to recreate some classic cocktails while giving them a more contemporary spin.

For instance, Gasaway has created a sweet Irish cocoa drink made with Bailey's Irish cream, a butterscotch Schnapps and, get this, a bunch of multicolored mini-marshmallows.

Yup, this is a hot chocolate that is suitable for the over-21 crowd.

"Who doesn't like hot cocoa in the wintertime?" Gasaway noted. "This drink makes everyone feel like a kid again. Except, the Bailey's and the Schnapps can make you feel snockered."

G&T aficionados may enjoy the "Winter Wonderland, which is made with gin, lime juice and rosemary simple syrup.

Gasaway gives the drink an appropriate, holiday-friendly twist by adding fresh berries and a swig of rosemary to the cocktail.

"We eat with our eyes, but we also drink with our eyes," he said. "Adding something green and red really makes this drink feel a whole lot like Christmas."

Just as tasty is Gasaway's take on a "Fireside" cocktail. Made with whiskey, cinnamon and a walnut simple syrup, he adds orange peel slices and cinnamon sticks to make it more festive.

"People immediately look to the past when they think about the holidays," Gasaway said. "We bring back the traditions of our families while hoping to add a few things of our own."

Which was why Gasaway was drawn to his neighbor's cocktail book in the first place.

"We may no longer have much of a cocktail culture and we certainly don't dress up the same way our parents do," he said. "But the holidays are a perfect time to look back at a more innocent time in our history."

Sound smart: Things you need to know about holiday drinks

WHAT IS IT: It's just another name for hot mulled cider. And before you ask, to mull something means adding spices like cinnamon, clove and allspice while heating up cider. You steep the spice and, then, get rid of it.

HOW LONG HAS IT BEEN AROUND: A very long time. Shakespeare even referred to wassail in "Hamlet."

FUN FACT: Plus you know that standard Christmas carol, "Here We Go A-Caroling?" Well, it was originally called "Here We Go A-Wassailing," which makes sense since we associate the drink with carolers.

WHAT IS IT: Made with milk, eggs, sugar, cream and, sometimes, liquor, eggnog is actually one word and not two. Why didn't we know that before now?

HOW LONG HAS IT BEEN AROUND: Milk punches, which is essentially what eggnog is, has been whetting whistles at least since the 17th century. Legend has it that George Washington served an eggnog-like drink (with Rye Whiskey, rum and sherry) to visitors.

FUN FACT: Ever have a warm Tom & Jerry Christmas punch? It was not named after that irritating, animated cat-and-mouse duo. In fact, the origin was attributed to a British writer back in the 1820s.

WHAT IS IT: A mixed drink made with rum, butter, cider and spices. How is different than a Hot Toddy? Well, a Toddy is made with whiskey, not rum. Plus a Toddy isn't as rich-tasting as Hot Buttered Rum, since it doesn't use butter.

HOW LONG HAS IT BEEN AROUND: At least, the mid-19th century. Hot buttered rum had another burst of popularity as a Tiki drink, popular in the 1940s.

FUN FACT: Mark this on your calendar because Hot Buttered Rum Day is celebrated on Jan. 17.

Rockers All that Remains, with Tallah, Varials and Miss May I coming to Anthem

SIOUX CITY -- During the Thanksgiving holiday, Kelly Bunkers will head over to a family gathering, hosted by his dad and with more than twenty…

SIOUX CITY -- For the past 28 years, the Festival of Trees has helped to usher in the holiday season.

A "Winter Wonderland" drink mixed by Chef Michael Gasaway, culinary arts instructor at Western Iowa Tech Community College, is shown. The drink is made with gin. lime juice, and a rosemary simple syrup.

Chef Michael Gasaway, culinary arts instructor at Western Iowa Tech Community College, peels an orange to make a garnish for a "Fireside" drink made with whiskey and a walnut simple syrup

A "Fireside" drink mixed by Chef Michael Gasaway, culinary arts instructor at Western Iowa Tech Community College, is shown. The drink is made with whiskey, cinnamon and a walnut simple syrup.