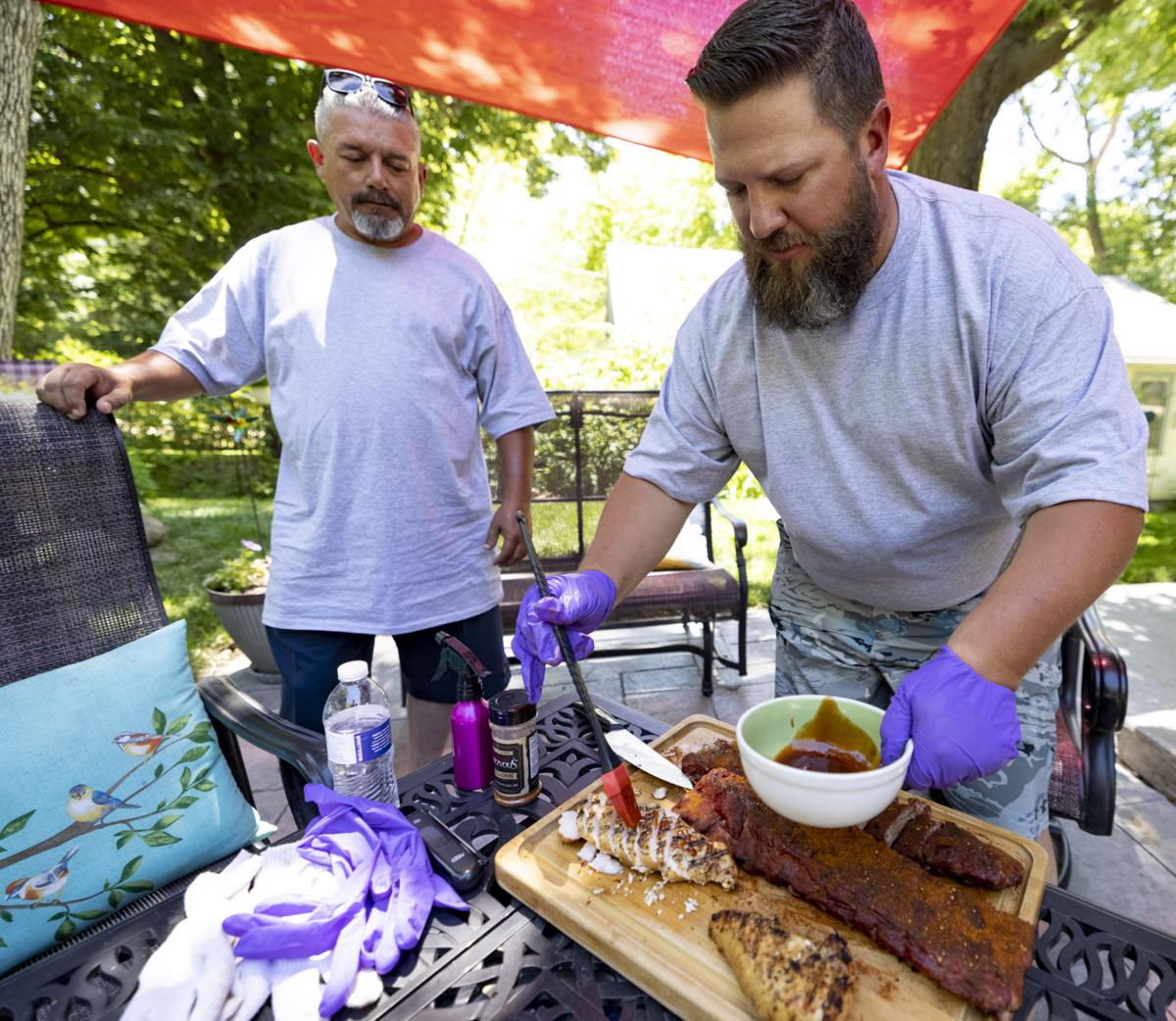 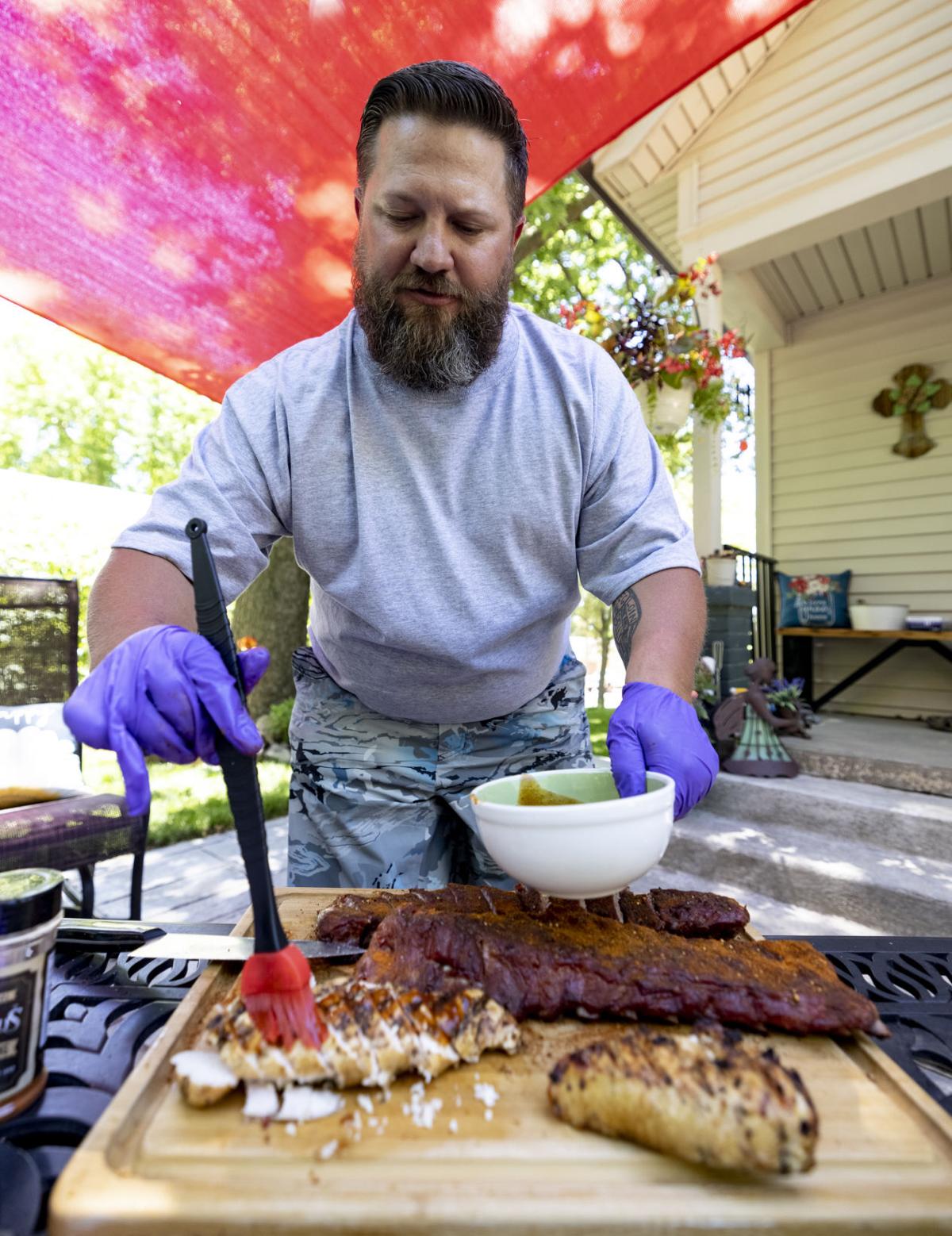 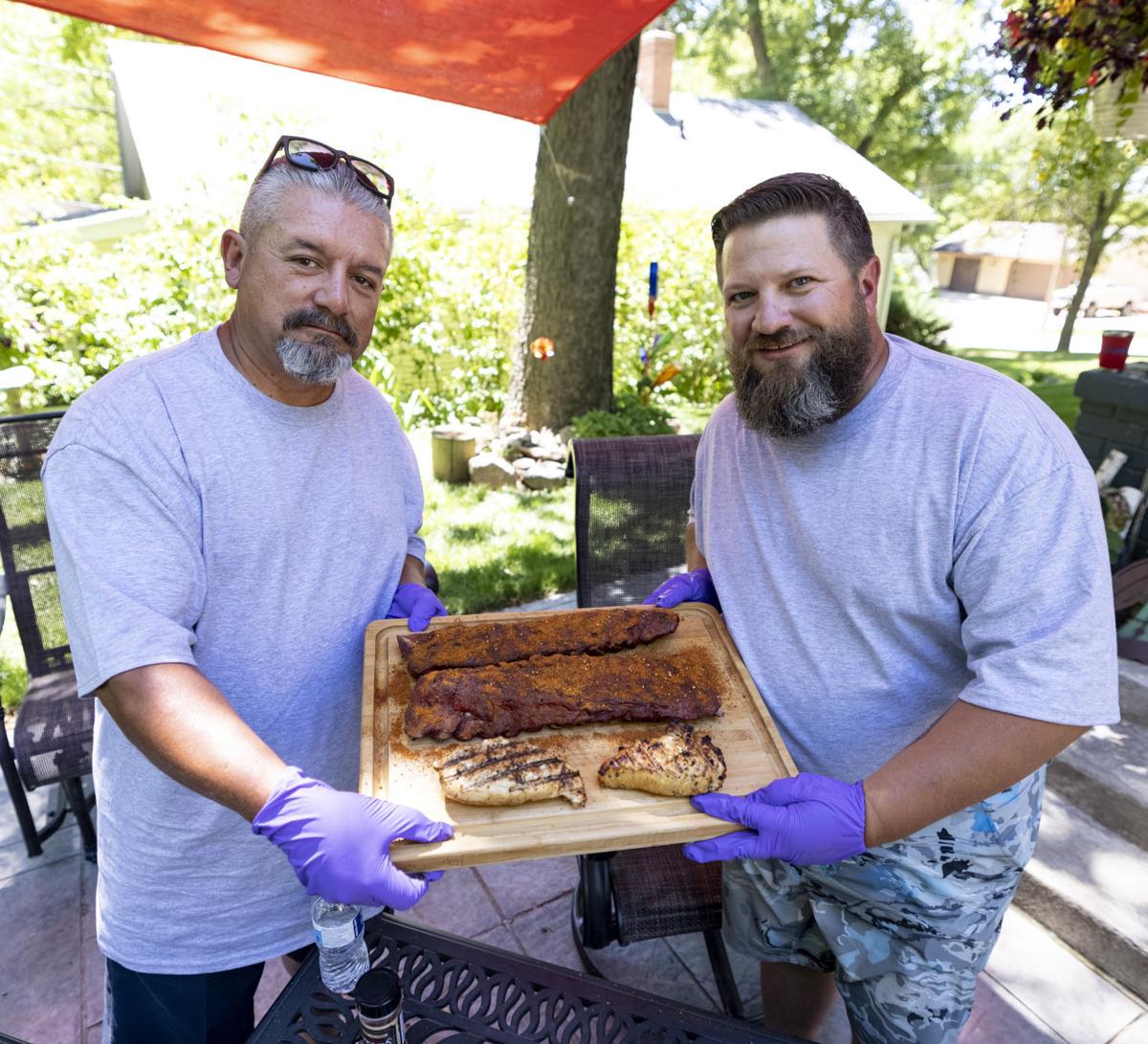 Professional underground construction workers during the week, Jason Ross, right, and Flavio Valenzuela, representing Digger's BBQ, will be one of the 25 barbecue teams competing for prize money and bragging rights during Camp High Hopes' Rib Fest on Saturday. 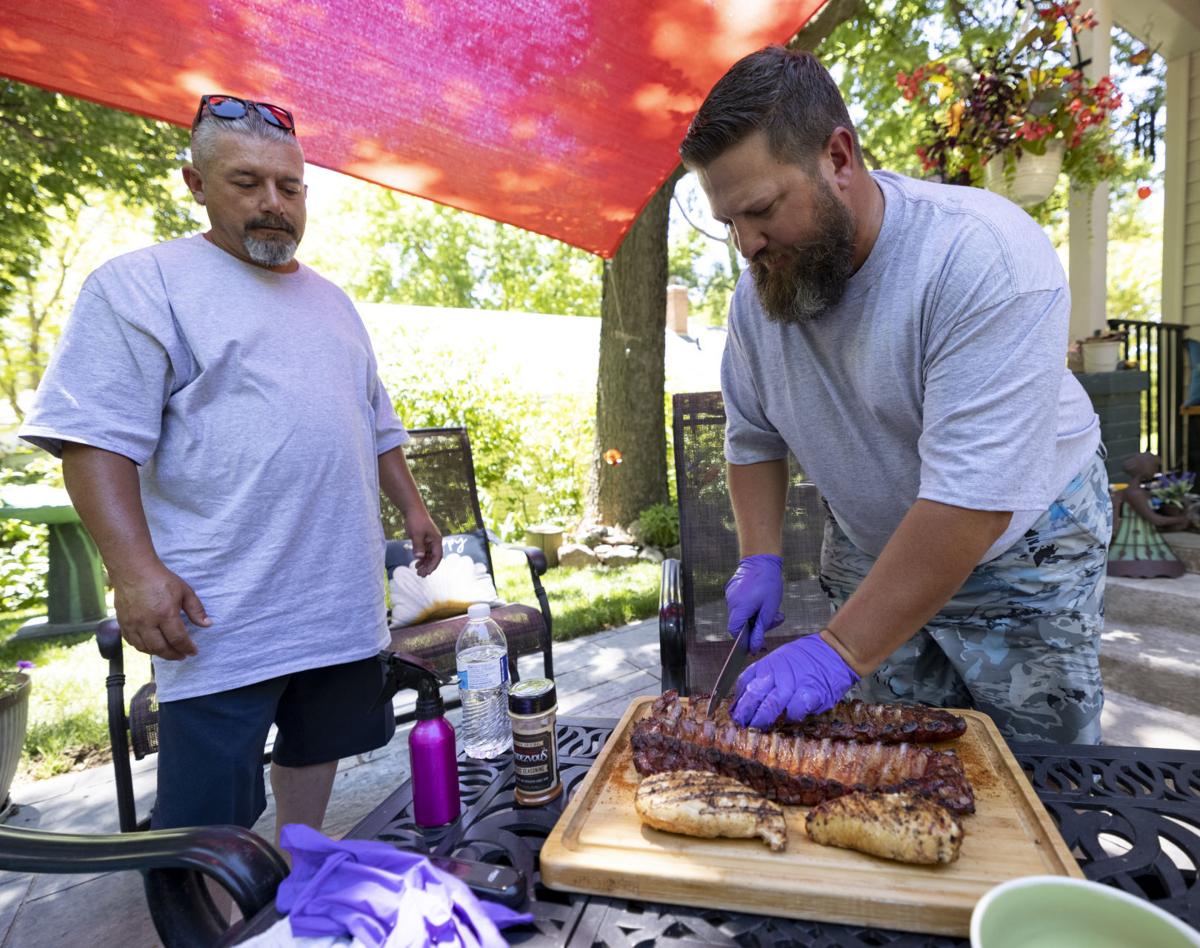 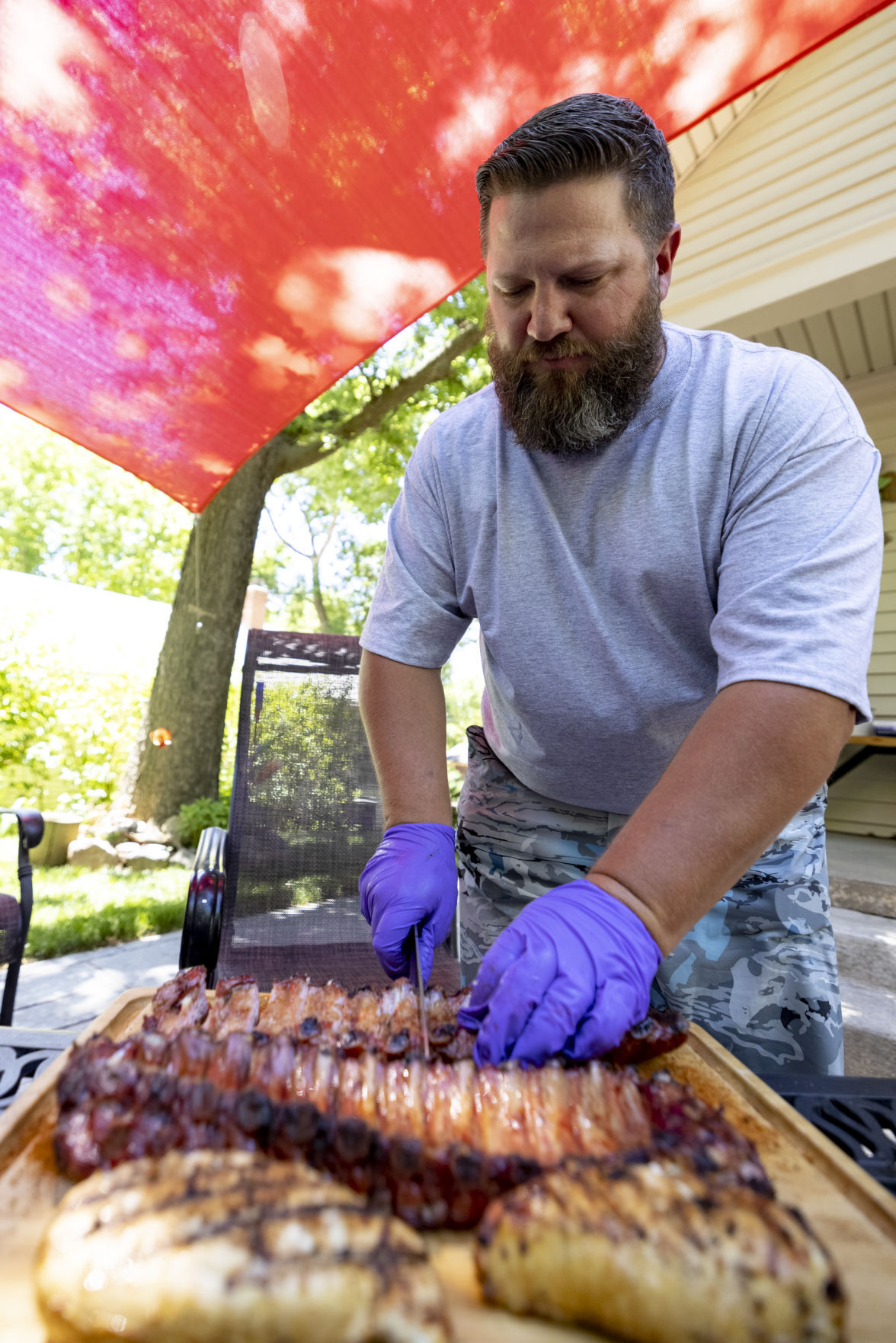 Jason Ross cuts smoked ribs at his home in Sioux City, before he competes at Camp High Hopes’ Rib Fest.

You can tell Jason Ross is serious when it comes to smoked meats.

The Sioux City man has a diagram, highlighting the tastier cuts of a pig, tattooed on his forearm.

Secondly, Ross, along with cooking partner Flavio Valenzuela, was busily talking strategy less than a week before Camp High Hope's annual Rib Fest, a contest which invites the local and regional barbecue teams to compete for prize money as well as for bragging rights.

"At Rib Fest, it's all about volume," Ross said, pointing to a smoker he purchased specifically for barbecue competitions. "You gotta please the judges and you gotta feed the public."

After all, Rib Fest -- a Kansas City Barbecue Society (KCBS)-sanctioned contest -- has a reputation for attracting Siouxland's savviest smokers and most brazen barbecue barons.

"I'm originally from Mississippi, where we prefer more Memphis-style barbecue," Ross explained. "Memphis barbecue has a dry rub and tends to be more vinegar-based."

Since Rib Fest is a KCBS contest, barbecue teams will opt for something sweeter and saucier.

"That's the thing about competitions," Ross said. "You're not cooking for yourself. You're cooking for the judges as well as the general public. Kansas City means messy, get all-over-your-face barbecue."

"I'm best known for a sauce that is sweet as molasses but with a kick that comes from Jack Daniels Whiskey," the Sioux City man said. "When I don't use that sauce, people miss it."

This year, Van Buskirk is actually toying with the idea of offering a fruitier, chipotle-based sauce.

"You're always looking at trends and trying to up your competitive game," he allowed.

Van Buskirk ought to know. When he's not competing in KCBS events, he's judging them.

"What started as a hobby has turned into a more expensive hobby," he says.

That happened when Van Buskirk decided to buy a custom-built smoker and any number of barbecue-related gadgets, gizmos and accessories.

"My wife just rolls her eyes nowadays," he said. "She knows barbecue is an obsession for me."

Apparently, it is an obsession that may be contagious.

"One year, we clocked how many hours we devoted to Rib Fest," he said. "From all of the prep needed the day before to the actual smoking of the meat as well as the event itself, we were probably up for a good 32 hours straight."

The proof is in the product, which barbecue aficionados insist requires going low and slow.

This is a sentiment shared by Ross, who makes his living in underground construction.

"Flavio and I call our team Digger's BBQ," he said with a laugh. "We dig for a living but we also dig barbecue."

Plus he and Valenzuela get plenty of practice.

"We're also barbecuing for family and friends," Valenzuela added. "A barbecue can just be an excuse to have a party with the people in your life."

Which is actually the not-so-secret appeal of barbecue.

"We've made a lot of friends through Rib Fest," Ross said. "It is as social as it is a contest."

According to Van Buskirk, contests can also be learning exercises.

"When you have some of the best barbecue teams in the area, you're bound to pick up some tricks of the trade," he reasoned.

Also helping is doing something for a good cause.

"Being able to help Camp High Hopes is very special," Van Buskirk said. "They do a lot for the community."

"The nice thing is that 100 percent of the funds raised by Rib Fest will stay in Siouxland to benefit the campers," Ross said.

That all sounds nice. But Rib Fest is all about the food, right?

"Everybody brings their A game to Rib Fest," Van Buskirk said. "That's for sure."

"We may be friends but Rib Fest is still a contest," Ross noted. "People may be able to get good ribs and chicken all over the place. Having said that, there is only one place where you can find our special 'Ross Sauce' and that is at our booth."

WHEN: Noon to 3 p.m. Saturday for a public sampling of chicken and ribs. A rib-eating contest -- with heats for kids, teens and adults -- will take place in addition of a drawing for raffle items. The announcement of the winning entries from Kansas City Barbecue Society judges -- as well as the people's choice winners -- will take place after 3 p.m.

NON-EATING STUFF TO DO: The Dane Louis Band will perform. Legendary pitmaster Sterling "Big Poppa" Ball, with more than 140 first place barbecue titles to his name, will be doing a demonstration as well as offering samples of his award-winning 'cue.

COST: $10 for adults and free for kids, age 12 and under. A $10 punch card, available at the gate, will allow you to have five tastings of ribs, chicken and sides.

Professional underground construction workers during the week, Jason Ross, right, and Flavio Valenzuela, representing Digger's BBQ, will be one of the 25 barbecue teams competing for prize money and bragging rights during Camp High Hopes' Rib Fest on Saturday.

Jason Ross cuts smoked ribs at his home in Sioux City, before he competes at Camp High Hopes’ Rib Fest.