Was he showing the students how to play an instrument or ways to write a song?

Nope, Smyth was giving a lesson on the perfect placement of a boom mic.

Wait, boom mics? Aren't those the long, funky-looking microphones that are used to pick up sound in movies and TV show? Yup, those are the ones.

"You have to be close enough to pick up sound," Smyth explained. "But you have to be far enough that boom isn't in your camera frame."

Since February, the 1309 Pierce St. music conservatory has been offering weekly film classes.

APPRECIATING 'BLUE VELVET': THE SONG AS WELL AS THE FILM

"For the month of March, we're focusing our attention on David Lynch," she said of the cult director, best known for such offbeat offerings as "Blue Velvet," "Twin Peaks" and "Eraserhead." "The early classes are for younger people while the later film discussions are meant for older movie fans."

Think a film appreciation program is far afield for a nonprofit music school? Well, not when you think about how often the music world connects with cinema.

Plus, the "MTV Generation" grew up, watching hours and hours of music videos in the comfort of their own homes.

Emory, who co-founded the conservatory with her musician-husband Ron Emory, was part of the generation who came of age during the heady "Video Killed the Radio Star" 1980s.

THE MTV GENERATION MEETS GEN Z-ERS ... AND BEYOND

Beyond that, the music school recently opened a "demo" studio -- for audio recordings and podcasts -- in addition to KXSC -- a TV station -- that will give music students a chance to run cameras and edit video.

This is where a Gen Z-er like Smyth comes in handy.

A self-admitted "movie nerd" he's already worked as a crew member for such film festival faves as Michael White's "The Ghost in Her."

BEHIND THE LENS OF FILMMAKING

Nowadays, Smyth is also giving wannabe filmmakers the lowdown on mics as well as scripts.

Rowan Risdal is well aware of the intricacies of film.

"I used to just like scary movies," the 10-year-old explained. "Now, I enjoy Hollywood blockbusters."

That puts Rowan on the same page as fellow film student Sofia Egstrom.

"I like big movies," the 14-year-old said with a shrug. "Do I have a favorite movie? No, it changes all the time."

While Sofia's friend Grace Emory has some experience as a performer, the 16-year-old recognized that some behind-the-scene cred will put her into double-hyphen territory. You know, as in writer-director-star.

"The more you know. the further you'll get," Grace said as Smyth nodded.

"Technology has changed so much that you don't need a big studio backing your film," he said. "A movie no longer needs to be made in Hollywood any more."

Indeed, the next David Lynch may come out of a tiny classroom of a Sioux City music conservatory.

"Wouldn't that be nice?" Emory asked with a smile. "That would be so cool." 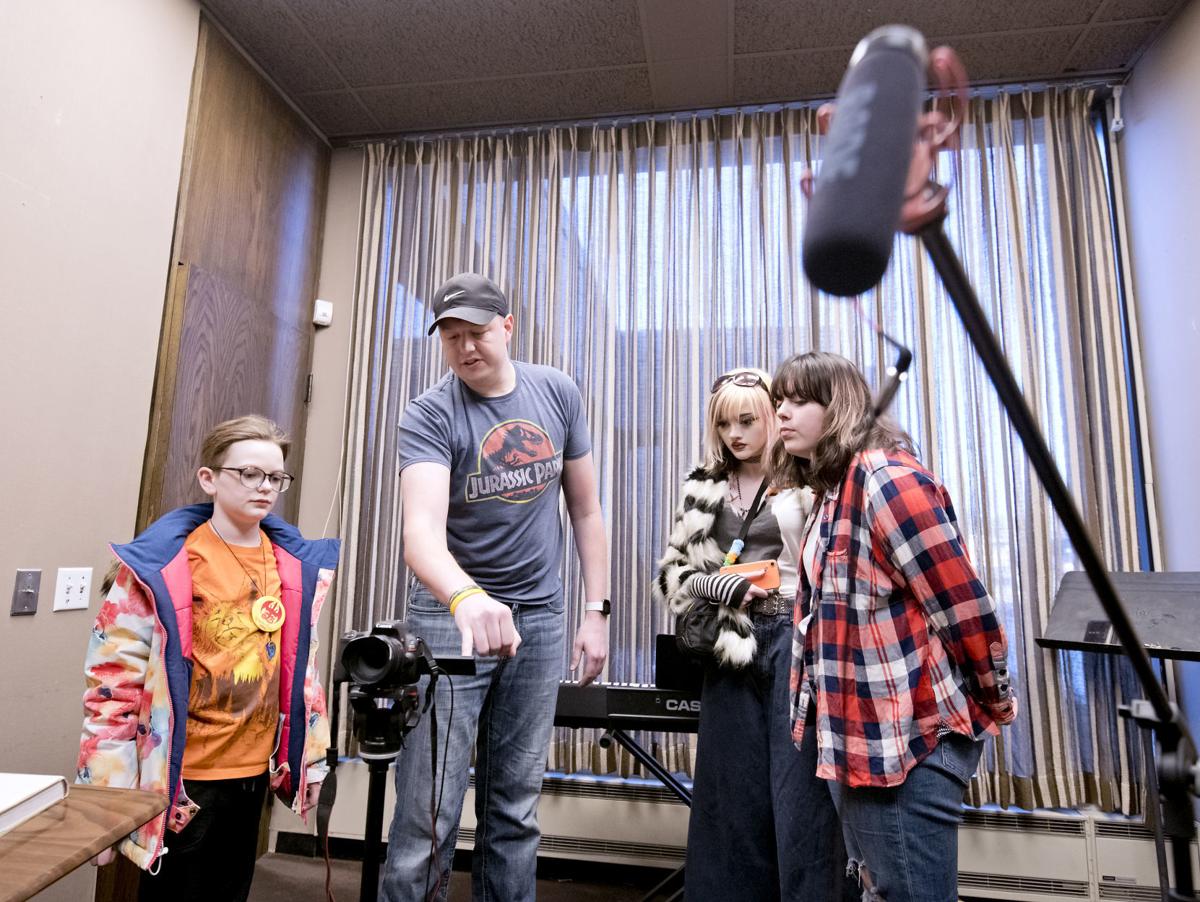 Brendan Smyth explains the audio levels on a camera screen to students Rowan Risdal, left, Grace Emory, and Sofia Hegstorm, right, while a microphone picks up sound in filmmaking class at the Sioux City Conservatory of Music. 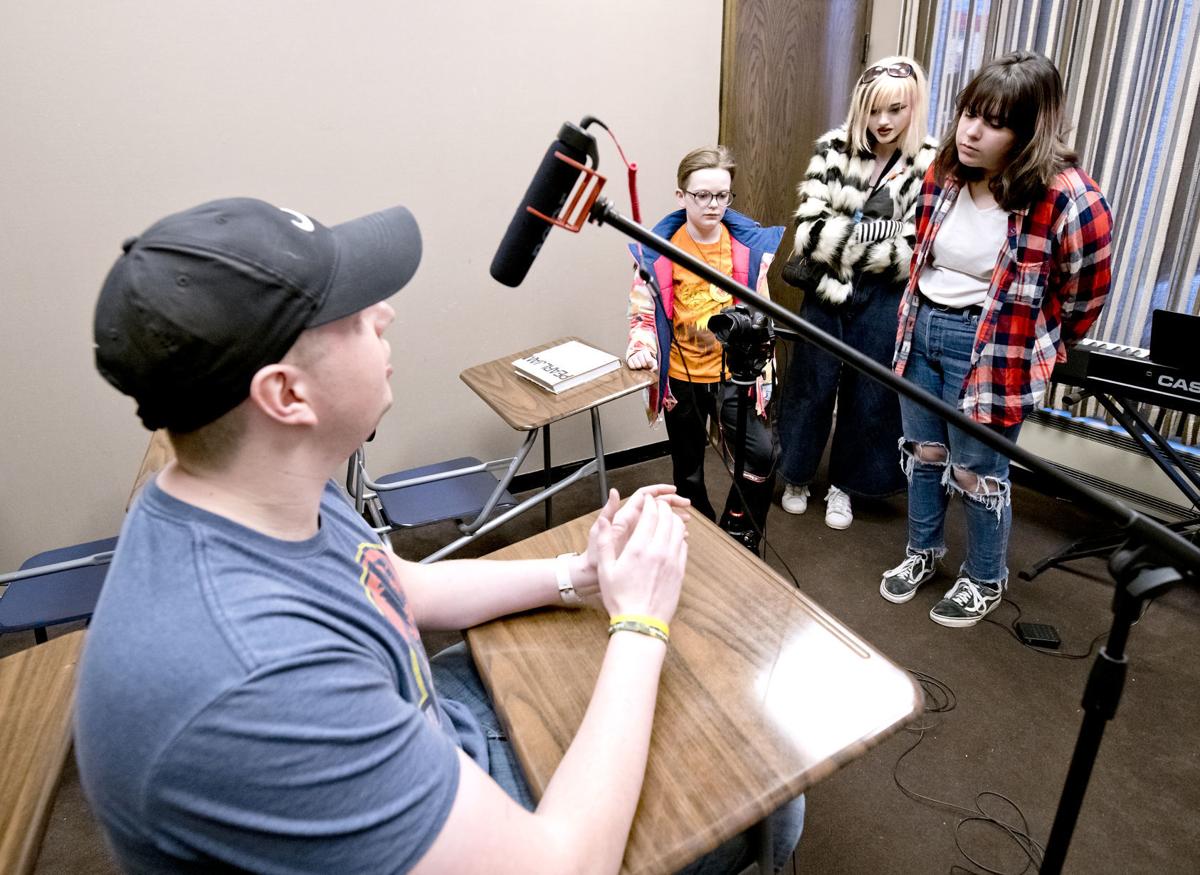 Brendan Smyth speaks into a microphone while students Rowan Risdal, left, Grace Emory, and Sofia Hegstorm, right, monitor the audio levels on a camera during filmmaking class at the Sioux City Conservatory of Music. The 1309 Pierce St. school began offering the film class in February. 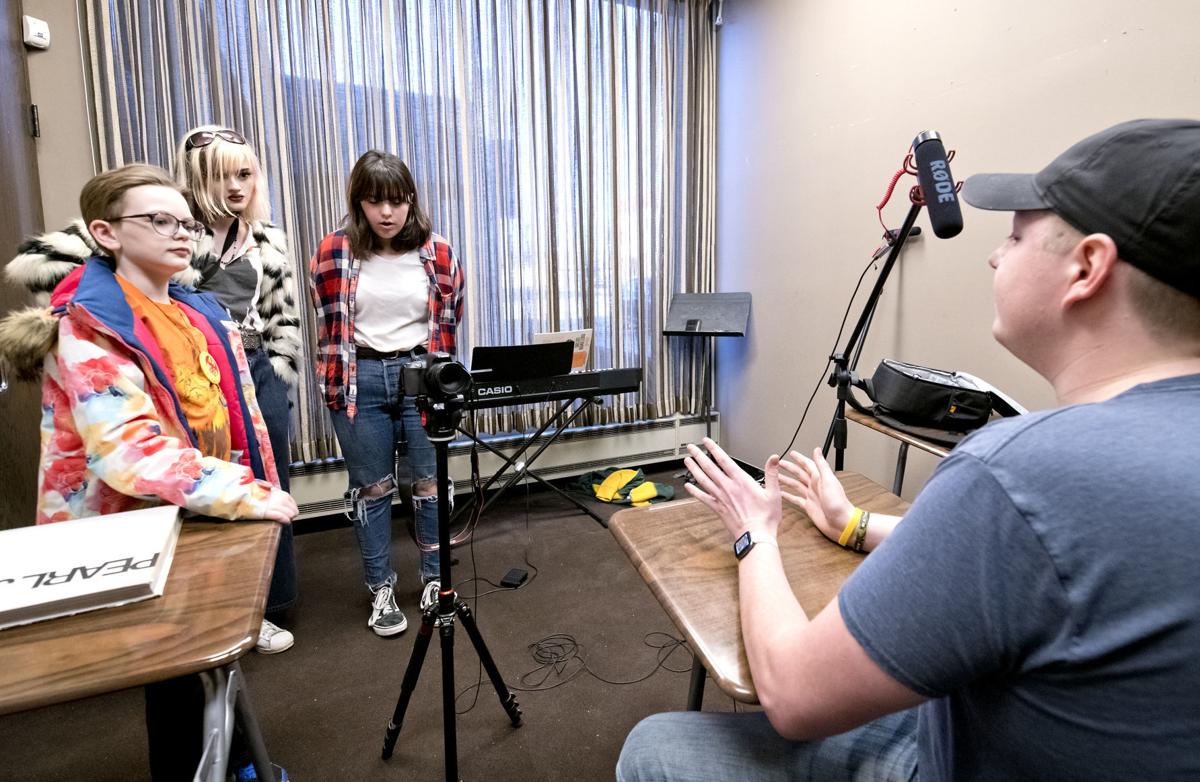 Brendan Smyth speaks into a microphone while students Rowan Risdal, left, Grace Emory, and Sofia Hegstorm, right, monitor the audio levels on a camera during filmmaking class at the Sioux City Conservatory of Music. 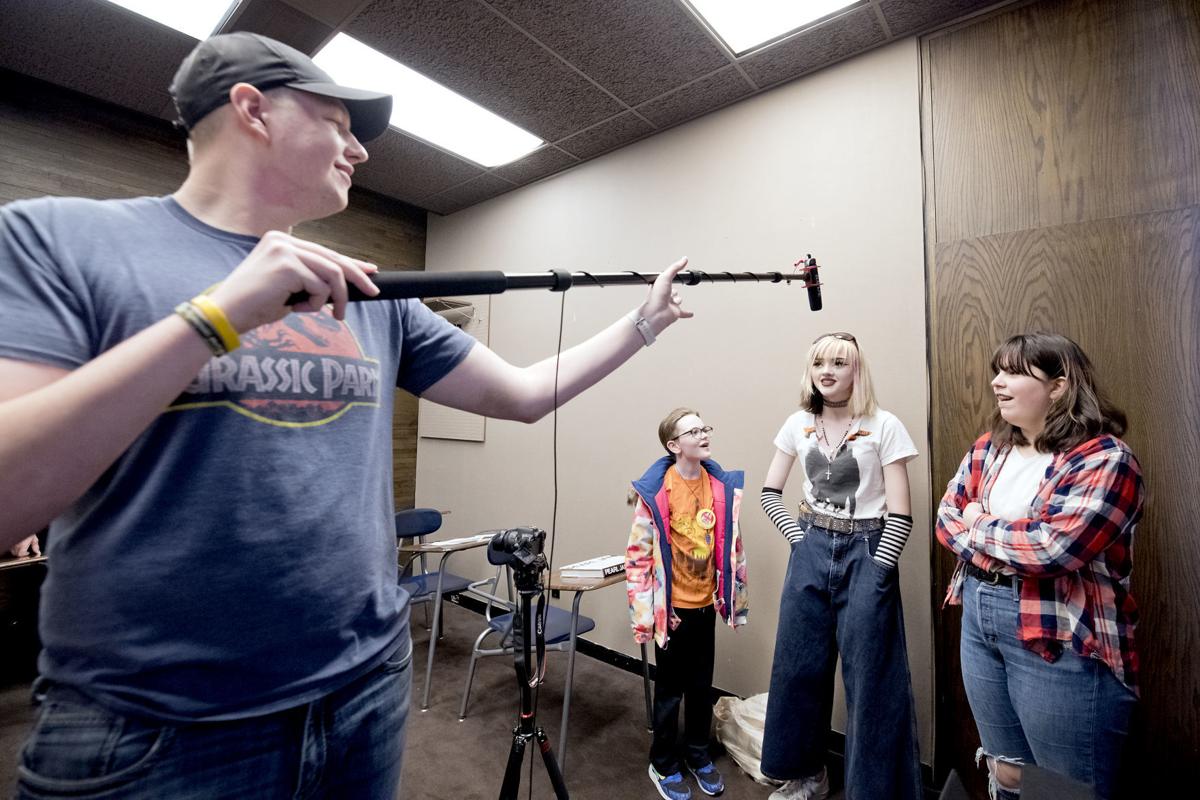 Brendan Smyth demonstrates how to hold a boom microphone to students Rowan Risdal, left, Grace Emory, and Sofia Hegstorm, right, during filmmaking class at the Sioux City Conservatory of Music. 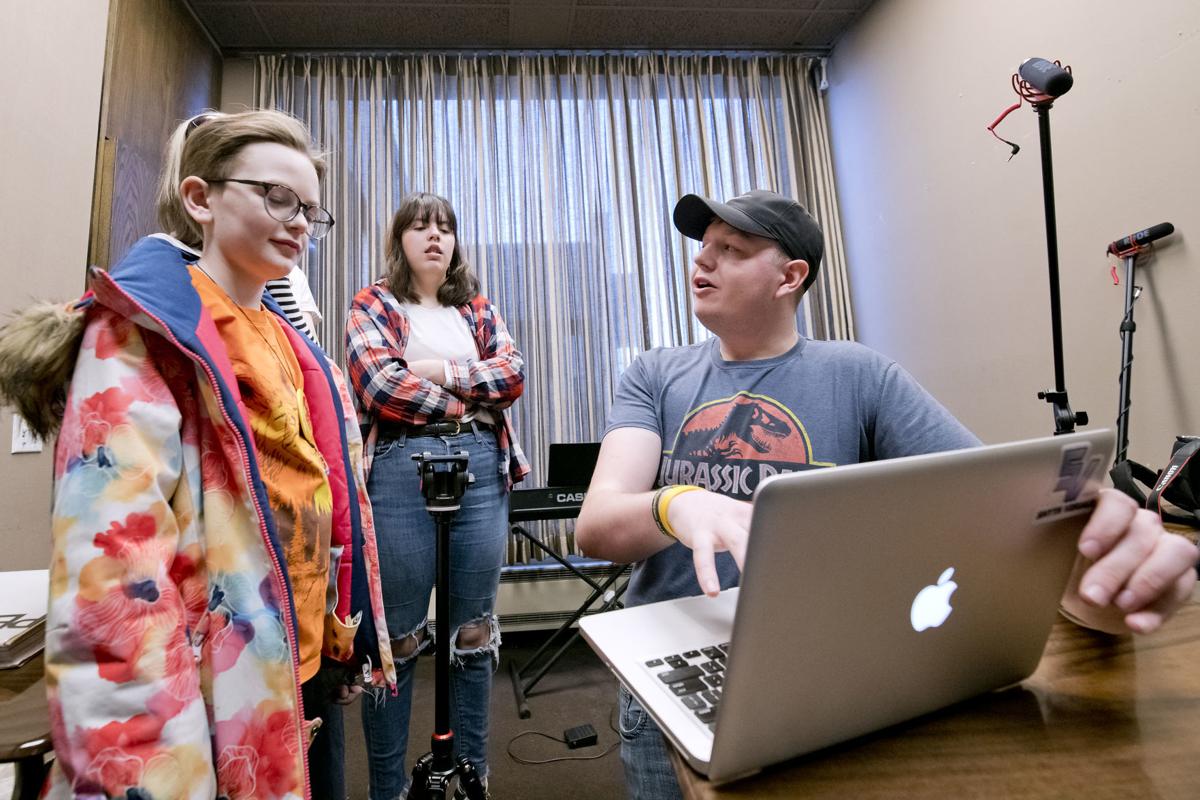 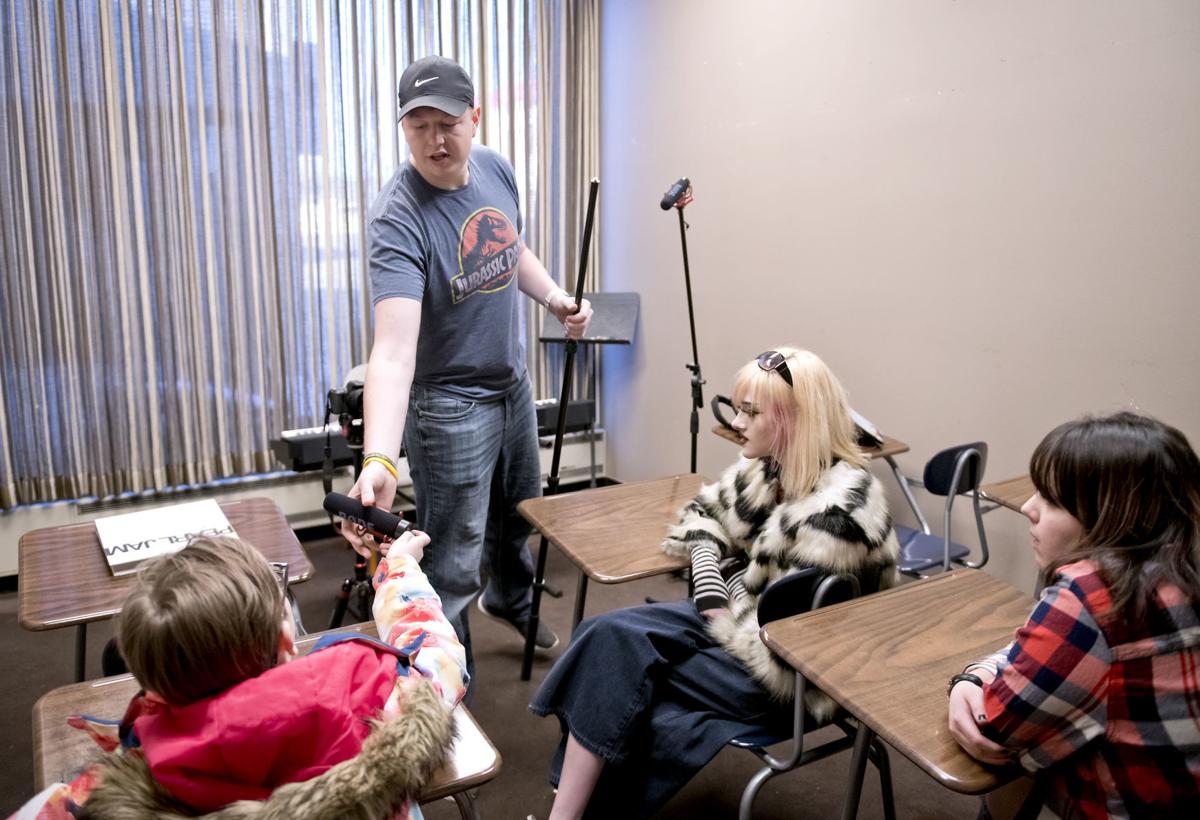 Instructor Brendan Smyth shows a microphone to Rowan Risdal, 10, while other students, Sofia Hegstorm, right, and Grace Emory listen to his explanation during filmmaking class at the Sioux City Conservatory of Music.