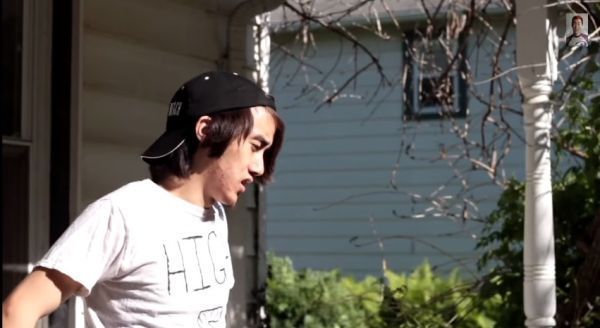 Siouxlander Ben Catus plays the eponymous character in Fatal Nostalgia's "High Five Guy." The film was shown during the Siouxland Film Festival at the Orpheum Theatre.

Winners of the Siouxland Film Festival will receive a Siouxsie Award.

Film festival board member John Carter said it was time to expand the annual contest.

“All these years we kept thinking maybe we could have a festival like most others that are more than one day,” said Carter. “The idea of having a festival in more than one location was appealing to us, especially since we could all be downtown.”

Out of the more than 80 films that were submitted on the websites Withoutabox and FilmFreeway, 33 have been selected for public viewing. The films were divided into separate genres exclusive to one of the three locations.

Board member Rick Mullin said he liked the challenge of hosting different genres of films.

“We’ve never done that before,” said Mullin. “It’s always been a mixed bag. Luckily we had a lot of films.”

A handful of local filmmakers will be sharing their films this year, but submissions come from all over the world — Sweden, Australia, Japan, Spain and France. The French film “Un Jour de Lucidite” (A Day of Lucidity) will make its world premiere on the first day of the festival.

“[The filmmakers] have never shown it publicly and they are pretty excited,” said Mullin. “They’ve gotten some strong feedback from professionals. It’s a classic, art house kind of film.”

“Un Jour de Lucidite” will be presented in French with English subtitles. The filmmakers themselves will make guest appearances, marking the first time anyone from overseas has accompanied a film at the Siouxland Film Festival, said Mullin.

With the three-day extension, board members decided to expand the maximum length of films from 15 minutes to 30 minutes. This year’s entries range from 24 seconds to 28 minutes. Mullin said the time change was for the better.

“There were some really interesting films that we had to reject over the years because they were 17 minutes long,” he said. “[We] had to be fair.”

After each evening, audience members have a chance to vote for their favorite film using small ballots attached to programs. Filmmakers can win up to $500 and the Siouxsie Award.

“I think this is a really strong lineup,” said Mullin. “We’re showing 33 of the best. I’m very pleased overall.”

"Batman and Jimbo" by Angus Mullane

"Of Poetry and Pigeons" by Colleen Kenney Fleischer

"The Mane Man" by Seamus Ryan

"I've Just Had a Dream" by Javier Navarro

"The Washing Machine" by Lorenzo Pomari

"The Captain" by Catherine Wolf

"Chasing the Past" by Jonathan Salemi

"Someone For Everyone" by Kyle Rogers

"Nobody" by Tom Radovich

"The Gift of Walnut Grove" by John Richard

"Save Myself" by Harlan Hegna

"That's So Gay" by Jason Lees

At the Academy Awards ceremony Sunday (Feb. 22), it's likely  "Boyhood" and "Birdman" will see the most results in major categories while the …

Movie munchies: Eat your way through the Oscars

The Academy Awards are always a great time to take a gander at your favorites on the red carpet.

When the first Siouxland Film Festival began 11 years ago, it was a much different affair than the three-day event that concluded Saturday night.

Siouxlander Ben Catus plays the eponymous character in Fatal Nostalgia's "High Five Guy." The film was shown during the Siouxland Film Festival at the Orpheum Theatre.

Winners of the Siouxland Film Festival will receive a Siouxsie Award.