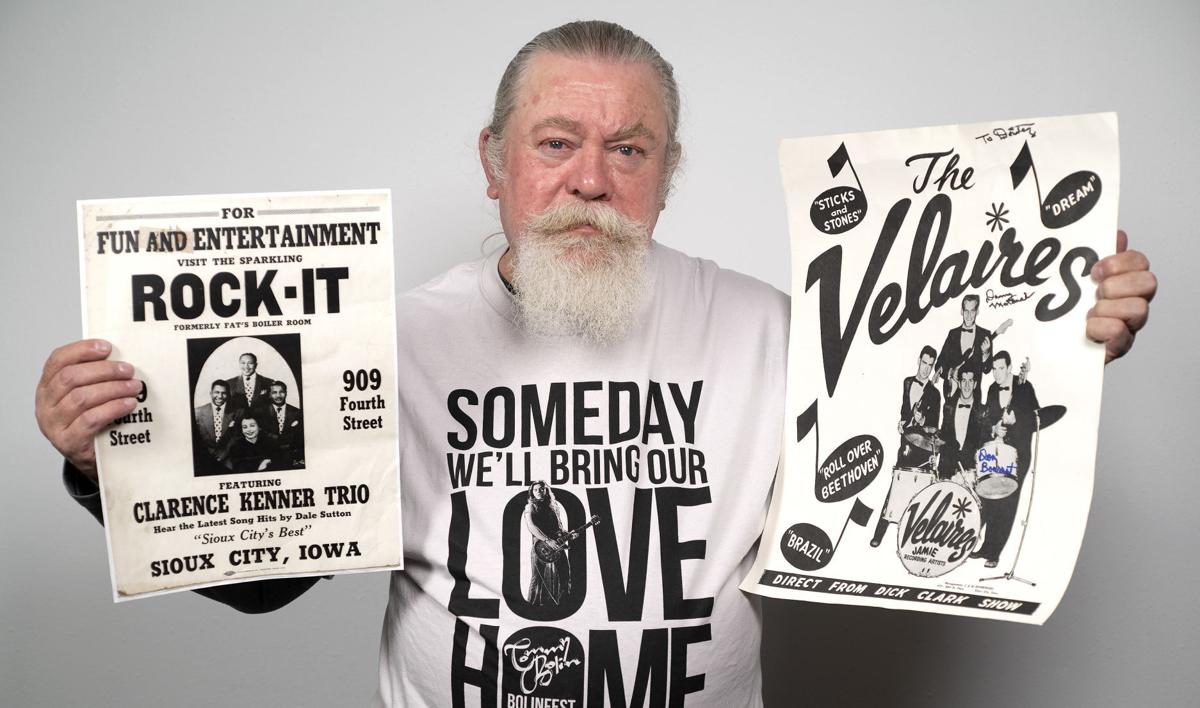 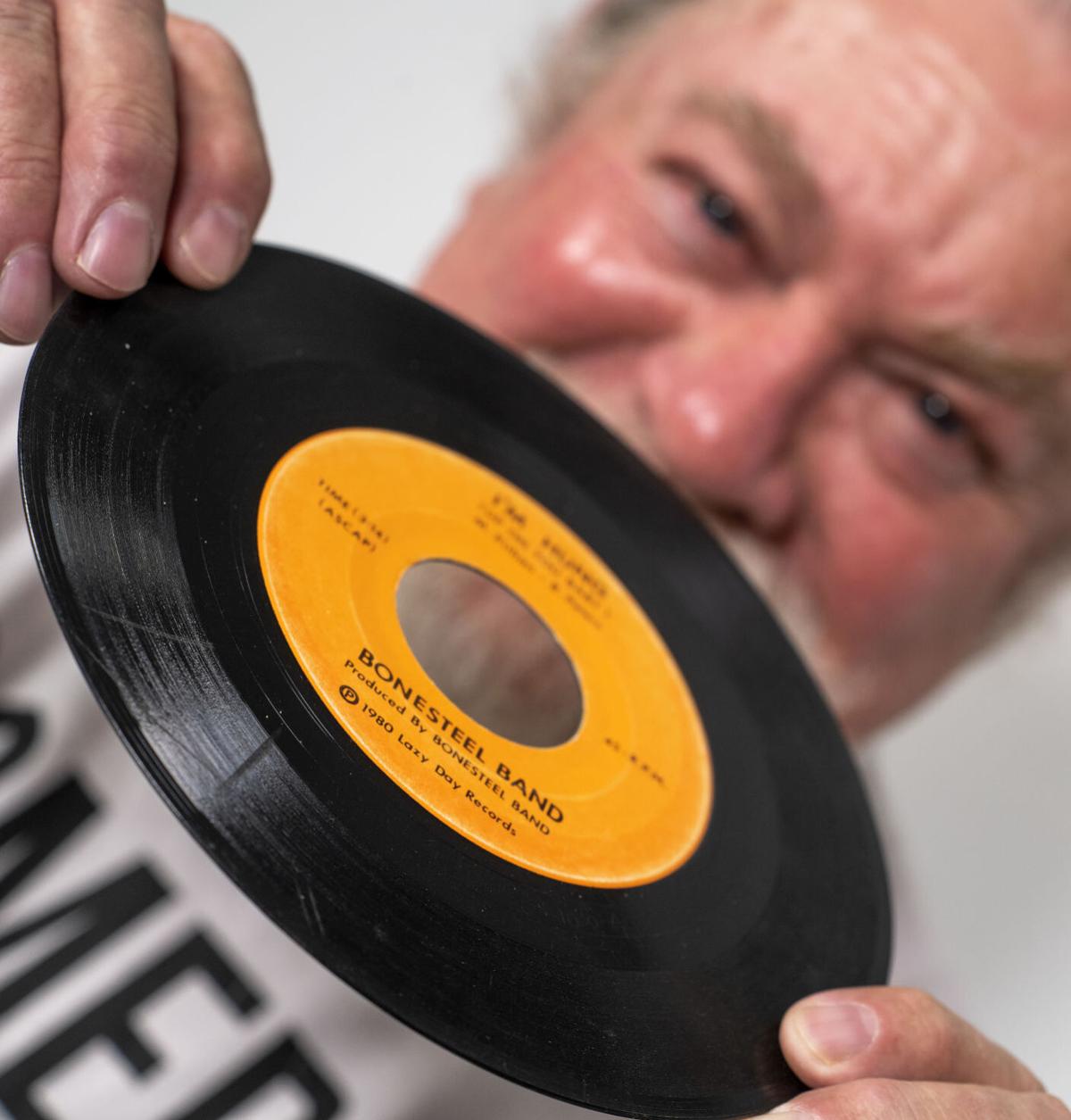 Phil Newby holds a Bonesteel 45 during an interview. 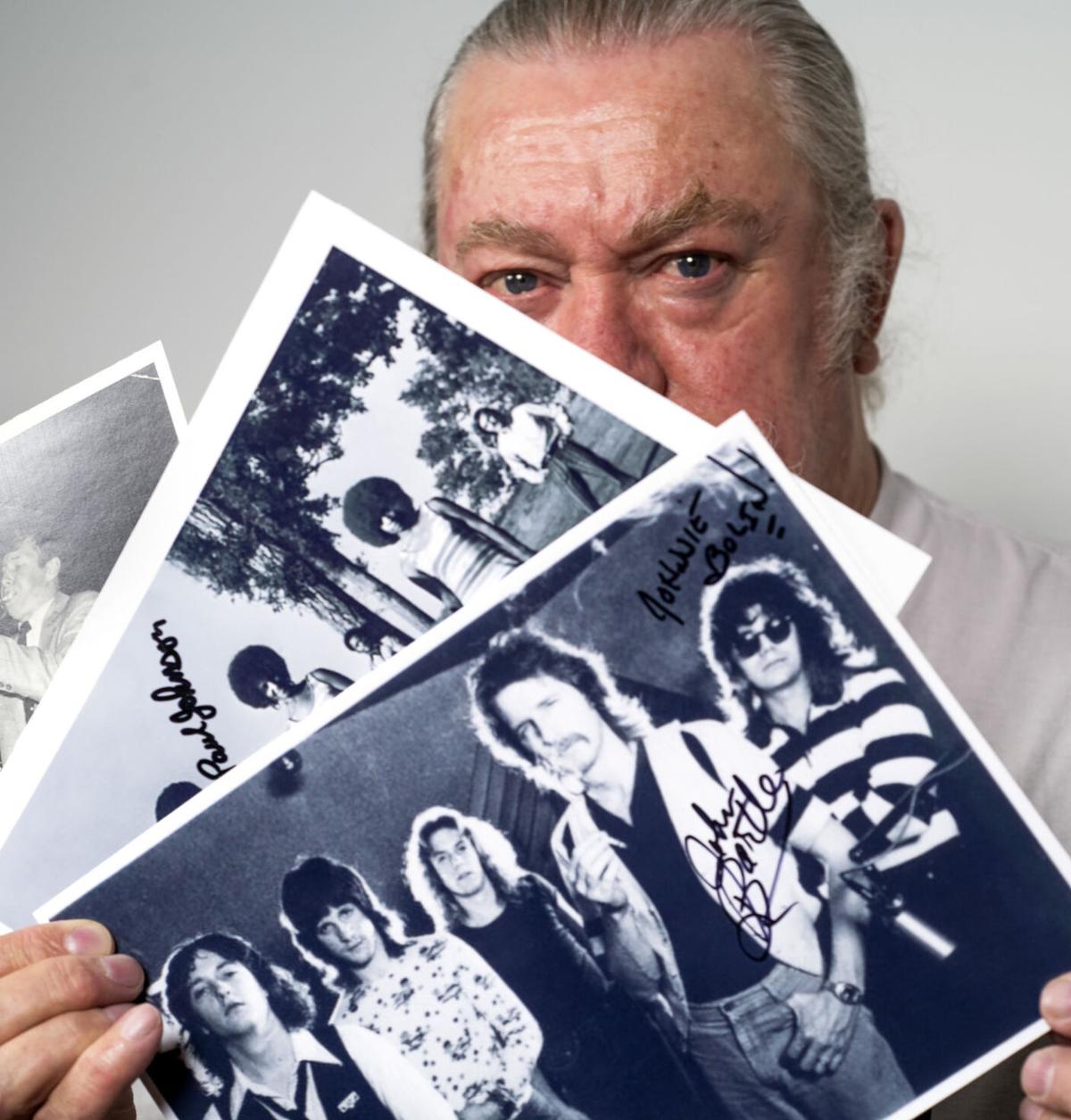 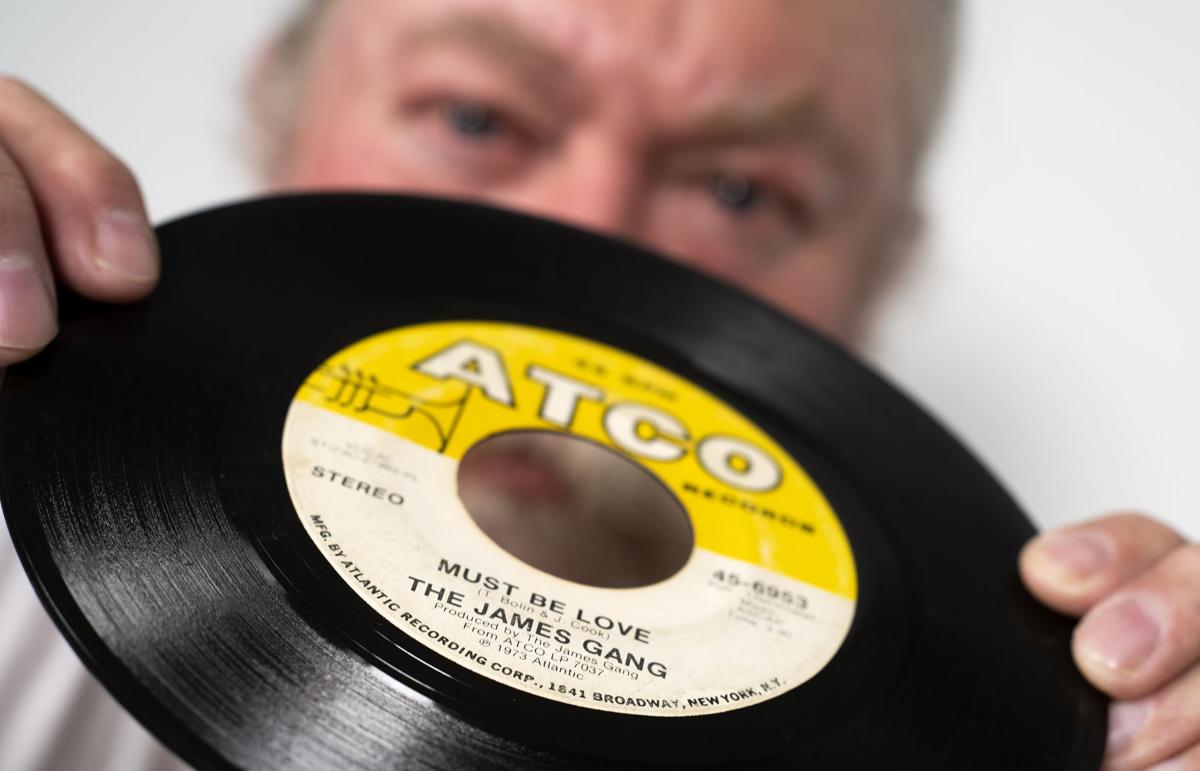 Phil Newby holds a James Gang 45. Newby, a recent inductee of the Midwest All Music Association’s Hall of Fame, is trying open a Siouxland Musical History Museum. His collection of local music memorabilia was most recently housed at the now-closed A-Gordon Jewelry & Loan in Sioux City.

In late October, Phil Newby was inducted into the Midwest All Music Association (MAMA) Hall of Fame.

He earned this honor even though his only foray into performing occurred in Texas more than 40 years ago.

Newby actually became a member of MAMA's Class of 2021 Hall of Famers for the voluminous collection of memorabilia he has compiled for the Siouxland Musical History Museum, of which he is the founder.

Oh wait, did we forget to tell you his tribute to Sioux City's colorful music scene currently lacks a physical home?

Newby, who worked at A Gordon's Jewelry & Loan for more than 30 years, had previously kept his collection of records, posters and promotional material on the pawnshop's wall.

When the store closed and Newby, then 65, retired, in September 2019, he moved his collection to an online site at facebook.com/siouxlandmusicalhistorymuseum.

"The museum is in the process of finding a new home," he said. "We're getting close."

Well, like many rock and rollers, Newby's tale actually started on the other side of the pond.

"I was born in England and my family moved to Texas in 1962, right around the start of British Invasion," he explained.

Along with many of his siblings, Newby loved listening to The Beatles, The Rolling Stones and other UK favorites.

A FAMILY OF MUSIC LOVERS

"There was always rock and roll in our household," he recalled. "It started with mom, who loved her record-of-the-month clubs and, eventually, it worked its way down to us kids."

"I had a singing voice that was similar to (Bad English lead singer) John Waite," he said.

Another thing that Newby had: debilitating stage fright.

"If it was for an audience of strangers, I'd be OK," he said. "Put me in a place where there a chance someone might know me, I'd clam up."

Although his brother Tony would later lead Roadhouse -- an eventual Iowa Rock 'N Roll Music Association Hall of Fame band -- Newby was happy to be on the sidelines.

When their mom relocated to Iowa, much of the family followed suit.

HOW A PAWNSHOP BECOMES A HANGOUT FOR MUSICIANS

Newby began working at A Gordon's, where he quickly uncovered a pawnshop secret.

Specifically, musicians are often such businesses' most consistent clientele.

REMEMBERING THE LEGENDS AS WELL AS THE DREAMERS

"Sioux City was always a place with great music," Newby said. "You had guys who became legends like Tommy Bolin, or musicians who traveled the world like Jack and Mike Langley, or bands like the Velaires, who made it all the way to 'American Bandstand.'"

But many of Sioux City's top musicians weren't the ones who became famous. Instead, they lived normal lives while making music, because it was their passion.

SIOUX CITY'S MUSICAL HISTORY, ONE STORY AT A TIME

"I loved hearing the personal stories of musicians and, to be honest, they loved telling me their stories," Newby explained. "The idea of hanging up posters and album covers in the shop came from the musicians. I guess they wanted to live past their lifetimes. In other words, they wanted to be remembered."

And Newby was more than happy to oblige.

"I didn't realize it, but I've been saving things for a long time, not knowing what it was for," he said. "I've always bought local records from music store and taking pictures."

Over time, Newby added his collectibles to the ones left by musicians. Plus he added vintage 45's purchased off the Internet and, even, old music covers from the Weekender to fill up space on the pawnshop's wall.

So, why was it important for Newby to keep local history alive?

"Well, no one else was doing it and I figure it might as well be me," he said with a smile. "People may know Tommy Bolin and his brother Johnnie. But there are plenty of musicians whose stories aren't so well known. Their histories are just as interesting."

Bringing some of his choice collectibles into the Sioux City Journal, Newby showed a photo of a local woman from the the turn of the century, who eventually started a popular all-female band.

He also showed a poster featuring the Clarence Kenner Trio, who played a show at the Rock-It Night Club in the 1950s.

"That's the cool thing about the Siouxland Musical History Museum," Newby said. "It isn't all about rock and roll musicians. There is also room for a classical performer who paved the way for other female musicians.

"Plus there is room for African-American musicians who were playing Sioux City nightclubs 50 years or longer," he added.

AN HONOR OF A LIFETIME

Newby was surprised when he received word that the Midwest All Music Association wanted to honor his work as part of their inaugural class of Hall of Famers.

Other inductees included music legends like The Embers, The Expressions, The Senders and Mike Langley.

"I couldn't believe I'd be standing side so many great musicians," Newby said with a sigh. "I even gave an acceptance speech despite my stage fright."

THE HEART, SOUNDS AND SOUL OF SIOUXLAND'S MUSIC SCENE

What started out a space on a wall of a pawnshop has expanded into a passion for Newby.

Over the years, he has acquired thousands of memorabilia, spotlighting the greats, the near-greats and ones who never quite hit it big

All of these musicians embody the heart, soul and sound of Sioux City's music scene, yesterday, today and, hopefully, for the future.

"It was the music that drove me to create the Siouxland Musical History Museum," Newby explained. "It is the personal stories of the musicians that will keep it alive."

Perhaps soon, Newby's collectibles will have a new physical home.

"We're working on it," he said with confidence. "We'll keep you posted."

Phil Newby holds a Bonesteel 45 during an interview.

Phil Newby holds a James Gang 45. Newby, a recent inductee of the Midwest All Music Association’s Hall of Fame, is trying open a Siouxland Musical History Museum. His collection of local music memorabilia was most recently housed at the now-closed A-Gordon Jewelry & Loan in Sioux City.