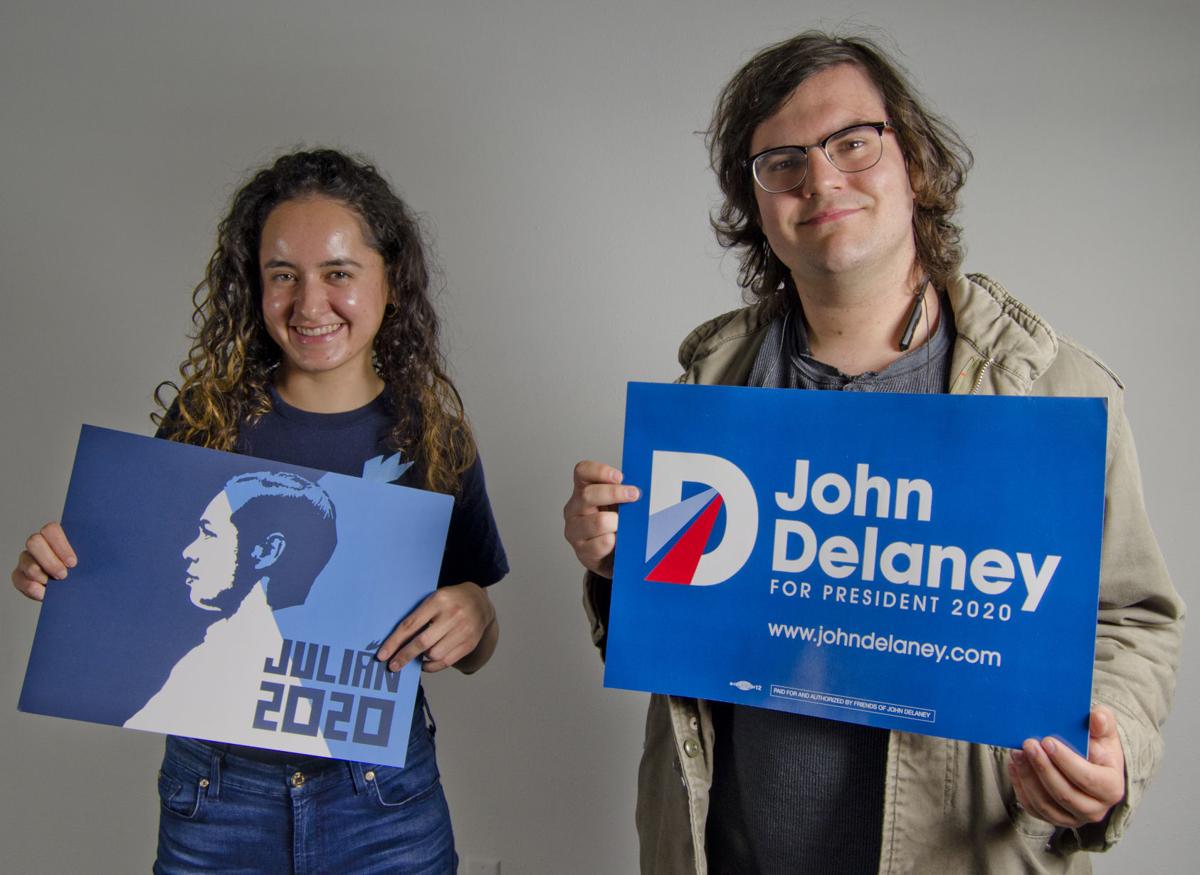 Out-of-towners Renata Miller (Julian Castro campaign) and Michael Leake (John Delaney campaign), along with local Delaney campaigner Ben Jackson (not pictured), stopped down to the Journal to speak of their experiences campaigning for their respective candidates. 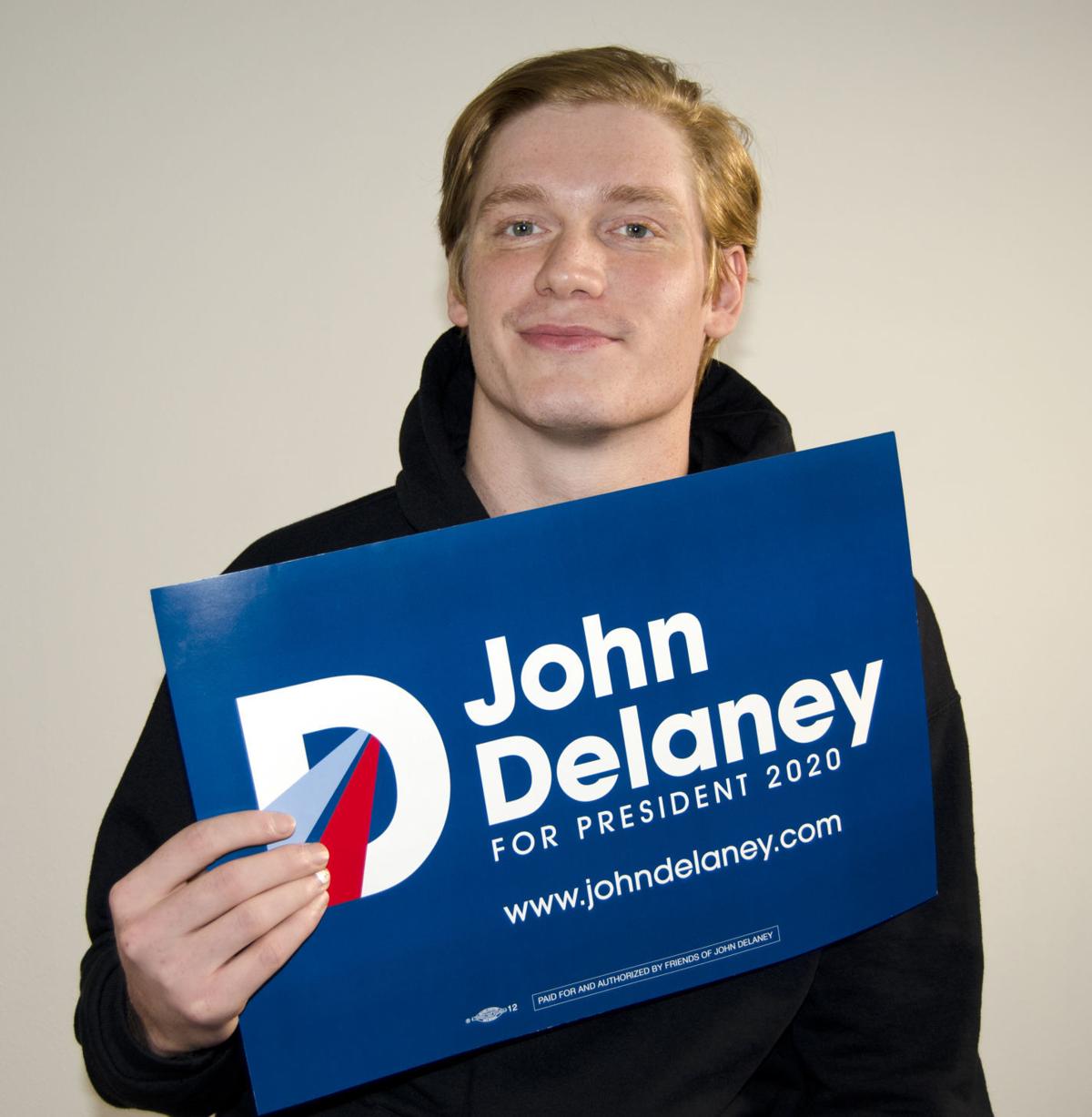 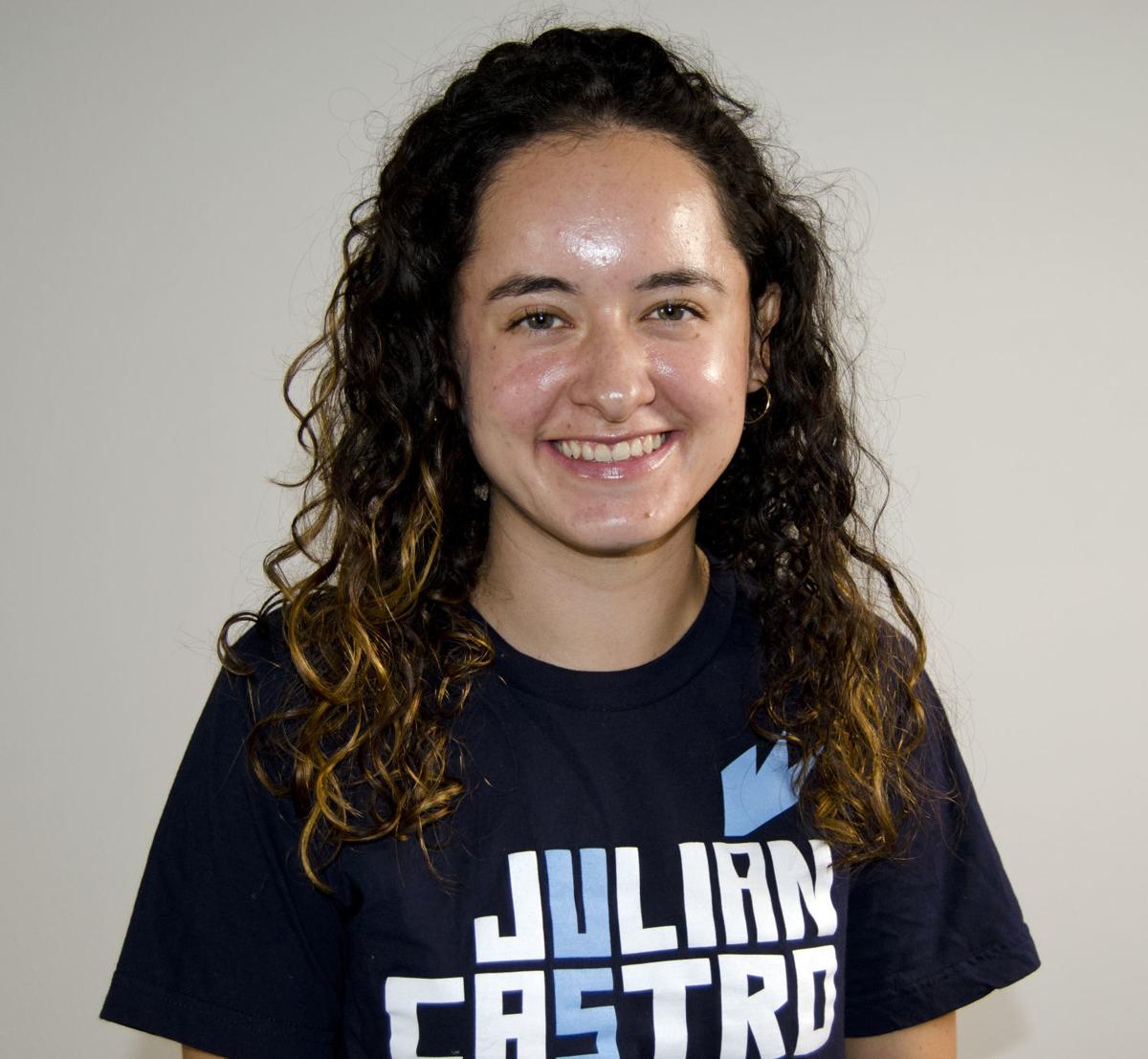 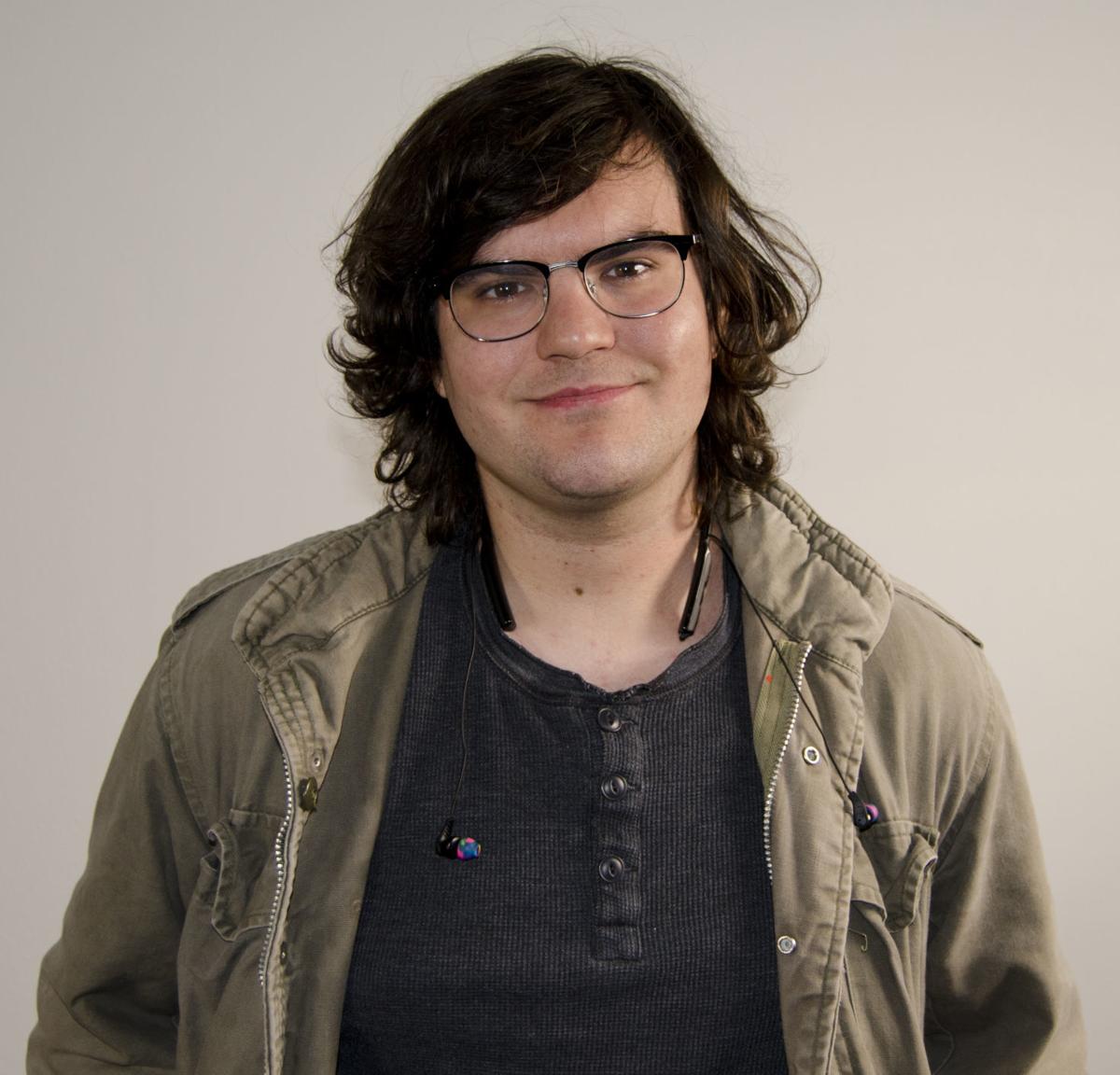 Every four years America has a presidential election and Iowa is on the forefront, brining all the power-hungry, change-promising presidential hopefuls out of the woodwork, descending upon our state with visions of grandeur, but does anyone ever think about the folks that come into town to work on these campaigns?

More often than not, these election workers are fresh out of college and drop everything in their lives to come in from out of state to help get their candidate into office. Three representatives were able to talk with us; two reps from John Delaney's campaign (24-year-old Floridian and Florida Southern College graduate Michael Leake and 24-year-old Sioux Cityan Ben Jackson) and one rep from Julian Castro's campaign (23-year-old New Yorker and Stanford graduate Renata Miller).

The Weekender realizes this year the only candidates that have set up shop in Sioux City have been Democrats, so Republicans, we are sorry, but we didn't have Republican campaign workers to interview. However, we still thought this might be an interesting topic to touch upon.

Why did these three get into the world of politics?

"I started organizing in 2018 with a group called For Future," said Leake. "I needed a job, but more than that, I've been interested in politics since Occupy Wall Street. In 2011 the occupy movement was happening at the same time I was learning about the progressive movement. When the progressive movement started, people were angry and hungry and there was a sense they needed to do something because the way things were going could not be sustained. I came from a Title 1 high school where about 66% of my classmates graduated with me and the rest either dropped out or didn't finish school. 2018 came and I figured something needs to be done; I can't just sit back and read. I have to act. If not me, then who? If not when, then now."

"In high school I had an AP government teacher that really got us thinking," said Miller. "She would have us watch 'Meet the Press' every Sunday and I started getting interested in politics through that. It went from being intellectual to taking action after 2016. Growing up in a multicultural family with an immigrant mother (from Peru), at that point I thought this country was starting to become the opposite of what it was supposed to be. That motivated me to get involved. It's a positive experience being involved in something greater."

"I got involved during the midterm elections doing volunteer work," said Jackson. "I got involved with campaigns last Sept. and had a great time with it. I felt like I was doing something good. At the beginning of this year I started an internship with the Delaney campaign, even though I had no college experience. They gave me a shot for this position."

What were the determining issues that made these campaign workers decide to work with their respective candidates' campaigns?

"One of the big issues in the U.S. today is that there is no consensus," said Leake. "We are very polarized. I don't see many people talking about a solution to that. Biden thinks we should go back to the way things were in the '70s, '80s and '90s. We can't just go back. We need to find a path forward and John Delaney really does believe that we can find that. He's fighting to find a way to get people united around the idea that we can keep the positive aspects of our system, but we need to make changes. Conservatives tend to move policies very slowly, and Democrats have the progressive ideal of striving for something greater. I think Delaney is trying to reconcile the two."

"Under the current President, the Hispanic community and immigrants in general have become the scapegoats," said Miller. "I think an antidote to that would be to see someone like Julian Castro, who's the only Hispanic candidate celebrating his immigrant roots, is an image that is the exact opposite of Trump's message right now. It's really important for children to be seeing someone with immigrant roots aspiring to the highest rank in politics and delivering the exact opposite message. As far as his policies, I support his education and immigration policies and the fact he highlights communities."

Two out of the three of these campaign workers travelled more than 1,000 miles to work on these campaigns. Sioux City is a new place for them, so we wondered what were their initial reactions to our humble town.

"I didn't know what to expect when I was driving in," said Leake. "I saw immediately what looked like a midwest industrial town, and I was correct. It is about the same size as where I came from, Lakeland, Florida. I realized pretty quickly that it's a lot smaller than I thought it would be. Where I'm from, we are between Tampa and Orlando, so we have a little under five million in a two-hour stretch. There's a lot fewer people here and there will be a lot more snow.

"Also, from my initial impression; there is a lot going on here. It's not this dying town. There's a lot of people here that have a lot of talent and great things. I began to fall in love with the city through that. It gave me a new perspective of the country as a whole."

"Our campaign just got to Sioux City," said Miller. "I didn't know what to expect. My grandparents on my dad's side are from Iowa, but I had never been here. It is a little smaller than I expected. The main thing that surprised me most was the presence of the Hispanic community. I don't think of Iowa and think of such a strong presence of Hispanics. What I was most shocked by was I went to a Spanish mass on a Sunday and it was PACKED! You couldn't even stand in the back. My NYC neighborhood has a strong Hispanic presence, and our masses are full, but I'd never seen a mass overflowing. It was a good surprise. I felt weirdly at home."

In order for the campaigns to be successful, the workers need to put in a ton of hard work and time, which means dropping most of the other things happening in their lives.

"I personally needed something different than I had before; I wasn't very happy in Florida," said Leake. "I saw an opportunity to pack up everything, leave and really see what happened when I went out there on my own. It was specifically TO drop everything else and find my own path. Florida felt stifling. This was an opportunity to be involved in something historic, so I did."

"It is a privilege that I got to drop everything and campaign," said Miller. "I don't have a sick parent or anything. For me, I just graduated from college, I'm young, this is the time I don't have ties or commitments; this is the best time in my life to be doing something like this, and also one of the most worthy causes. It's crazy I'm coming of age during this time and during this election. The universe basically told me this was my opportunity. I asked myself 'how can I not do this?'"

As we can see, these individuals are aspiring to be involved in politics. But what happens after this election cycle? Will they decide to continue working in the field of politics?

"My aspirations involve politics to a degree," said Leake. "I'm still trying to figure out what I want to do 10 to 15 years from now. It's a long way off and I still have a lot of growing to do. I could work in a local party or go work in the DC area. I'd also like to do environmental organizing and activism. I definitely see my aspirations as having some tie into politics because one of the driving ideas in my life is that history is being written right now. 100 years from now people will either be condemning us or praising us. We have a choice of how we are seen and what happens. I want to take part in those choices."

"My dream is to end up in DC working on Capitol Hill," said Miller. "I did a program my Junior year during my quarter abroad in DC. I got to intern on Capitol Hill. It was interesting to see how those federal laws were made. I was in awe of how much was decided in those halls. The energy there was the flip-side of campaign work. There you have to get your policy goals into action. I'd love to explore that and see how it works. A year ago I didn't think I'd be on a presidential campaign."

"I have a lot of different aspirations," said Jackson. "Music, athletics and politics. I want to take all of those things as far as I can take them."

What sports did Weekender readers love most this year? Look back with us.

No. 10 story of 2019: Democratic presidential candidates flock to Sioux City

The Journal begins its countdown of the Top 10 Stories of 2019 in Siouxland, as chosen by Journal editors. The No. 1 story will be revealed on Dec. 30, and the Journal's annual Newsmaker of the Year will be named on Dec. 31.

Out-of-towners Renata Miller (Julian Castro campaign) and Michael Leake (John Delaney campaign), along with local Delaney campaigner Ben Jackson (not pictured), stopped down to the Journal to speak of their experiences campaigning for their respective candidates.