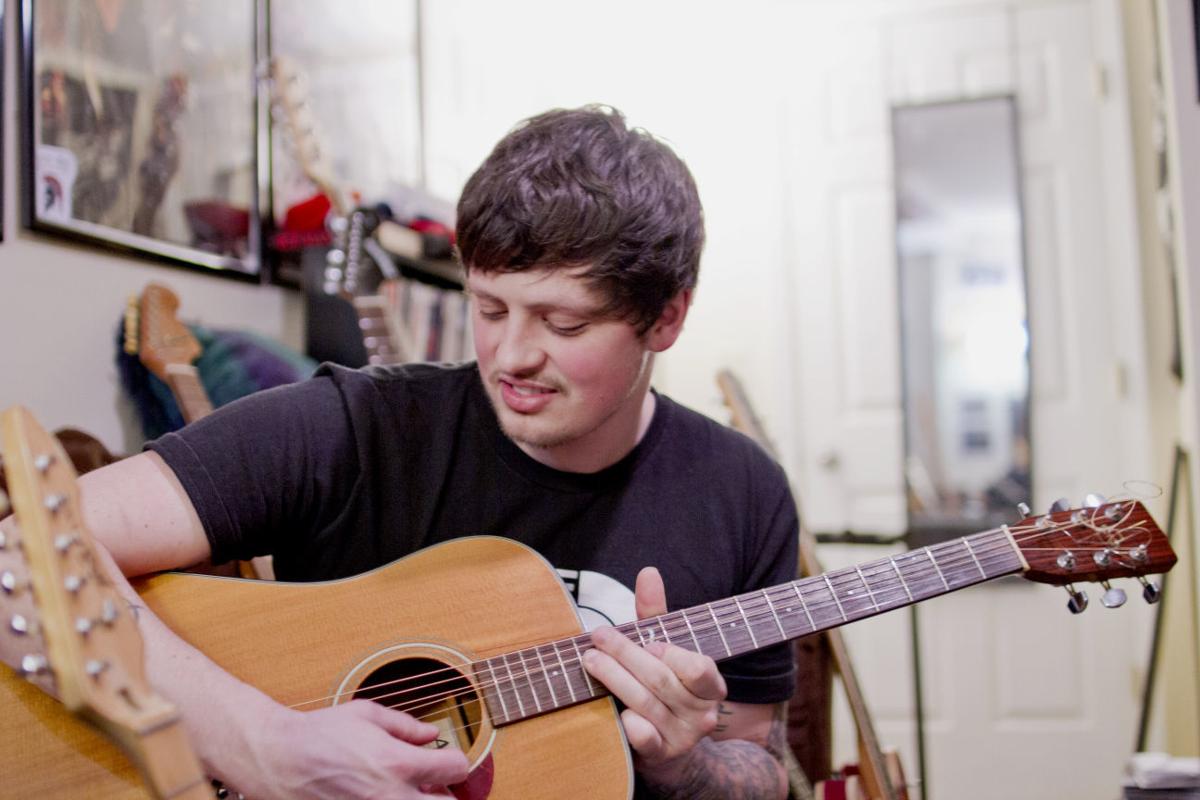 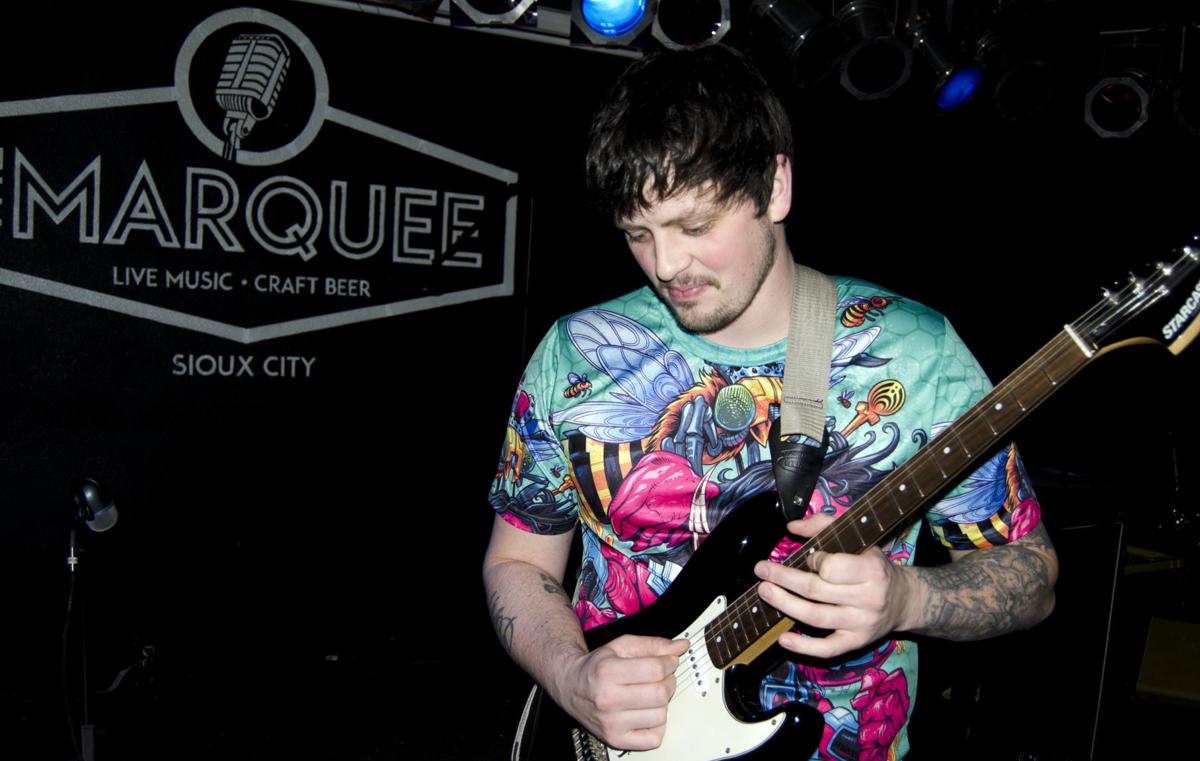 Nick Carter, founder of Did You Play Your Guitar Today?, prepares to give away guitars to children without the means to buy guitars themselves. 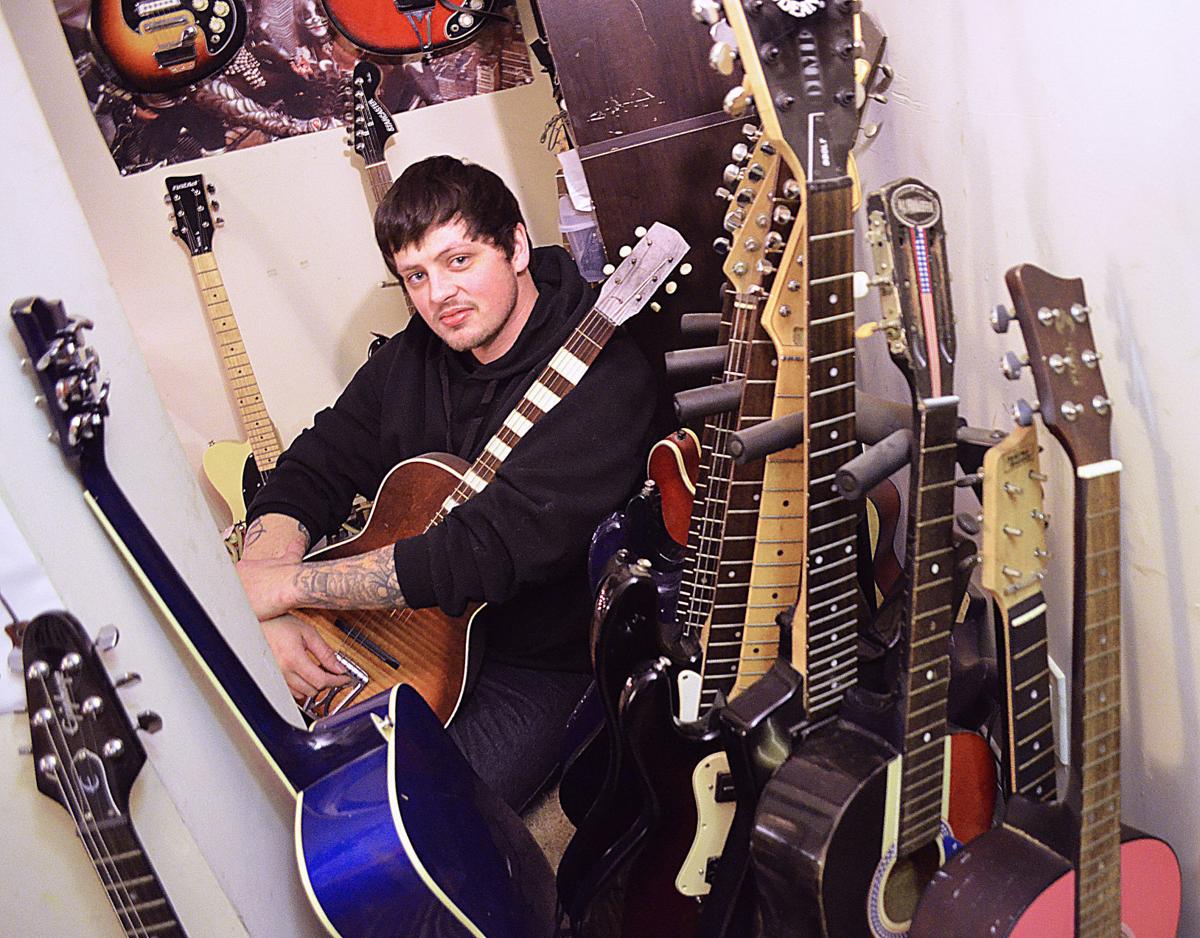 Nick Carter, a guitar enthusiast and founder of Did You Play Your Guitar Today? 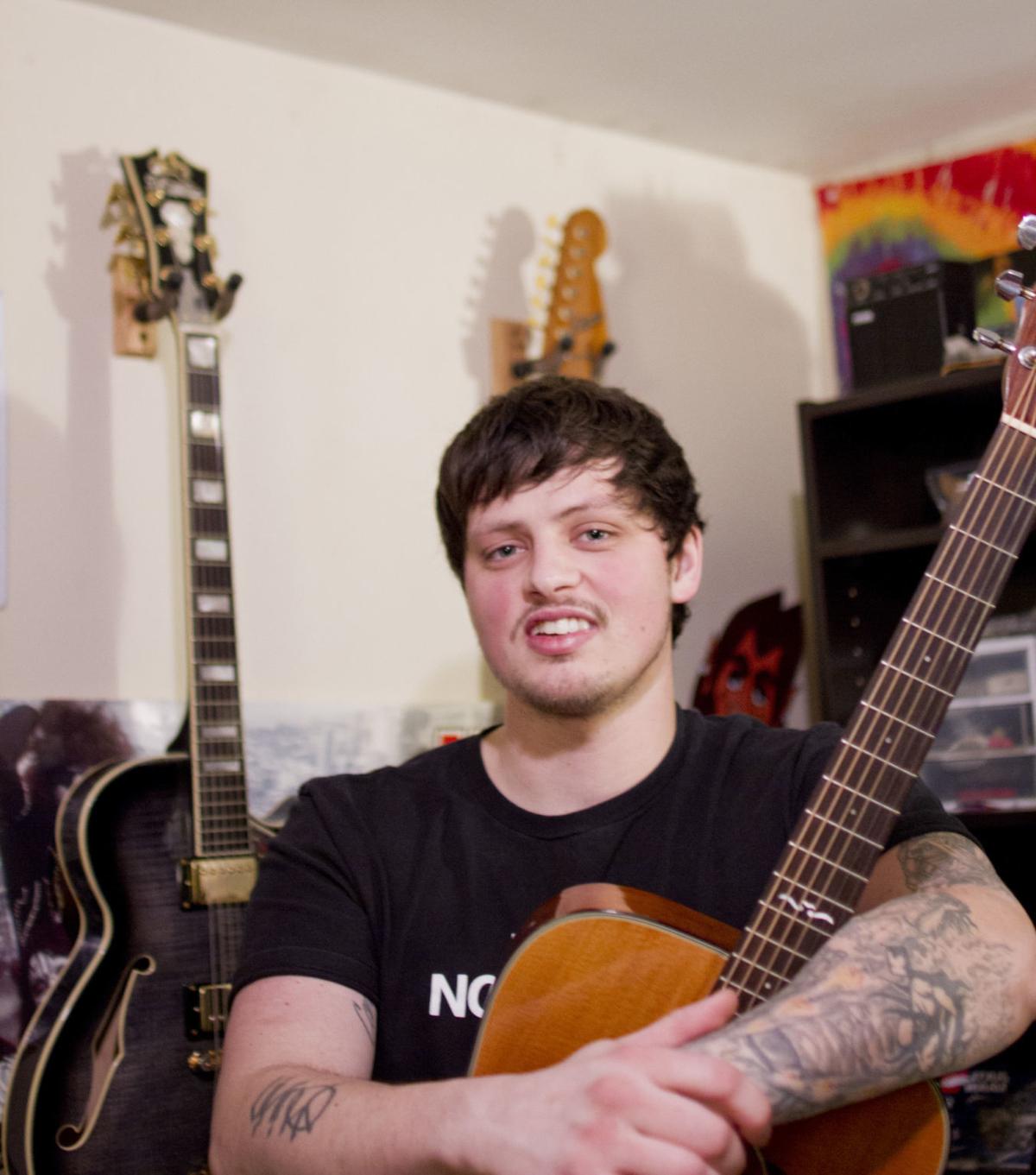 Nick Carter has a stockpile of guitars ready to be given out to people who want them the most. 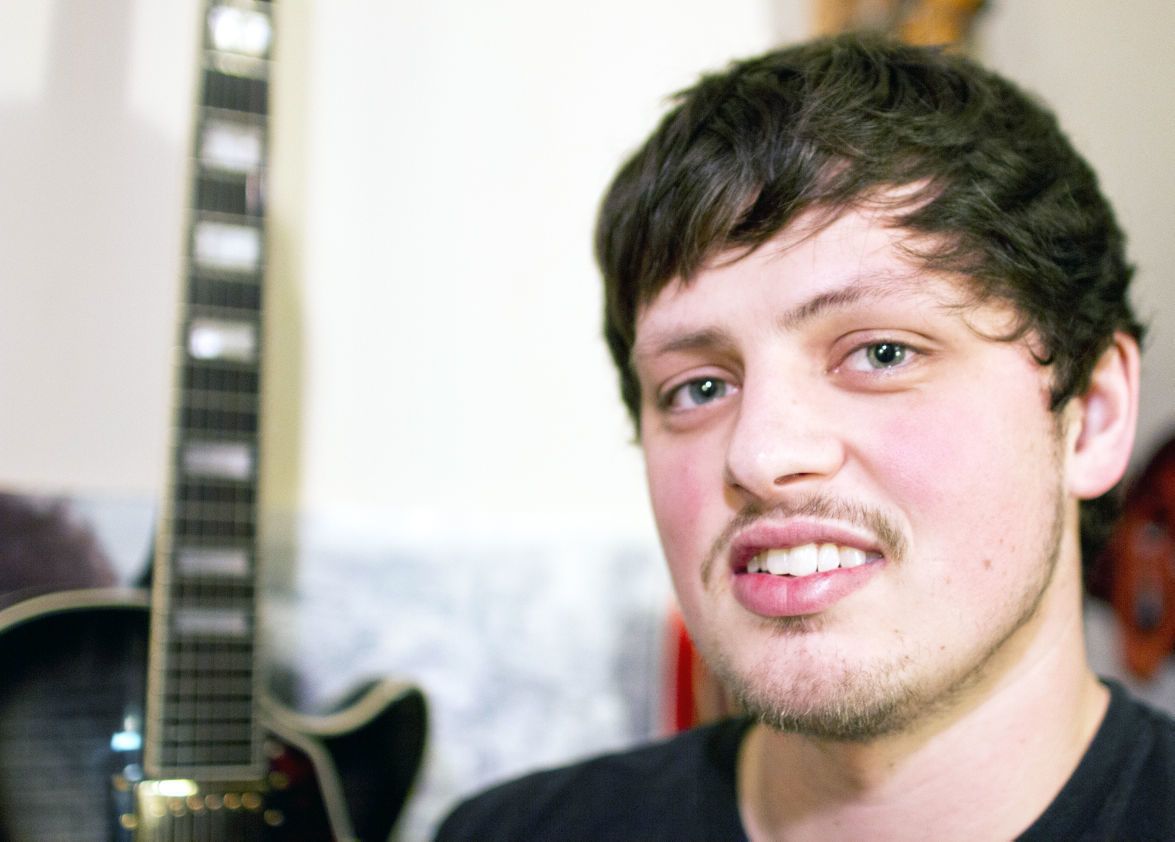 Nick Carter, 27, created a Facebook page called "Did You Play Your Guitar Today?" in which the Siouxlander seeks to donate guitars to kids.

Imagine an event that gives the gift of music to children whose families are not in the position to get them an instrument.

You can now stop imagining because such an event will be taking place starting at 7 p.m on Nov. 22 at The Marquee (1225 Fourth St.).

Started by local father of two boys (8-year-old Finn and 10-month old Hendrix), foreman at Tyson and “guitar hero” Nick Carter, the event is now in its fifth year. “Did You Play Your Guitar Today?” is Carter’s brainchild which he started after winning a guitar and seeing how good the feeling was. He wanted to give guitars to children in families that would otherwise not be able to afford the instruments.

“What happened was I entered an Instagram contest and won a guitar from D’ Angelico,” said Carter. “It was really surreal and mind blowing. Winning gave me all the reason to start giving to people.

“The organization I created, Did You Play Your Guitar Today?, is primarily focused on trying to get guitars in the hands of kids who want them who might not get them. It helps out the naïve parents who might not know anything about guitars.”

A free-will donation is all it takes to enter the festivities, particularly monetary or music-related donations.

“You could come with a pack of strings, guitar pics, used or broken guitars ... anything musical you bring will be used as a donation,” said Carter.

Besides the obvious local music ties, why was The Marquee chosen as the location for this event?

“The Marquee actually chose me,” said Carter. “Kelly (Quinn) and Mitch (Martin) both reached out to me, telling me this needed to happen. Without these guys I might not have made my goal last year. A lot of the money comes from my own pocket, which is fun, but the community has also come out to support. It feels real good.”

It is the time of year for giving, which Carter loves and believes in wholeheartedly, and he appreciates the opportunity to do so while teaching his son the spirit of charity.

“We always have this around Christmas and the holiday season; it doesn’t exclude anyone,” said Carter. “Around this time there’s a lot of giving, and I’m a sucker for giving. I love Christmas. I have an 8-year-old son who I like to show what we are doing every year and why we are doing it ... it’s important he sees that.

“When I was growing up, I wanted a guitar so bad, but my mom and dad were naïve to it. I wish I could be standing somewhere someday and hear a kid saying they want a guitar. Their parents may not be able to afford it, but I could come and save the day.”

Over the course of the last four years, this event has given away over 100 guitars to less-fortunate children.

Carter obtains guitars from donations, swap sites and pawn shops. This year, Carter scored big when Gordon's Pawn Shop closed down and donated 15 guitars and other gear to his cause. After he receives the guitars, he works on them to make sure they are in playing condition before giving the guitars away to the children.

Why is it so important to Carter that these children get a chance to take home a guitar?

“Just to give them a chance they may not be able to have,” said Carter. “It feels so damned good to give. Music is so important. If a kid wants to experience music, they need it. It’s so healthy. You need to let them have it. I get a huge kick out of seeing these kids with their new guitars. Hopefully my son really picks up on this.”

If your child wants the opportunity to get a free guitar, Carter suggests having your child send him a letter stating why he or she wants a guitar.

“Last year I got a ton of letters,” he said. “You can tell who is getting assistance with writing the letters ... who’s really trying. If there is a kid who really wants a guitar, there is no way I can’t give the kid a guitar.”

The reaction of the children receiving the guitars is always worth the time and energy spent by Carter and the others putting on the event.

“I have a couple videos of kids saying, 'It’s a real guitar!’” said Carter. “Some say, ‘Thank you, Nick.’ Sometimes girls start crying when they receive their guitars. I’ve seen silence, too, which is great. Music is such a personal thing. It was big to me while growing up, and I just want to give that to other people.”

In addition to the benefit, there will also be raffles, a silent auction,  drinks and live music from Shawn Fertig, Spenny & The Jets, Sans Dula and others.

If you want to help give the gift of music to children, come to this event and participate. Music shouldn’t only be in the hands of the wealthy; everybody should have a chance for self-expression and a healthy creative outlet.

"Showing up to this event is not just going there; it is literally contributing to all these kids," said Carter. "If you go there and just give a little bit, you've helped make somebody's holiday. Just one dollar pays for four guitar picks, which I like to package with the guitars I give to the kids.

“It’s going to be a good time and it’s a chance for everybody to be involved in something that means a lot to me and to these kids that might not have as much during the holidays as we do. If somebody wanted to come to me and offer to sponsor a kid for Christmas, I will encourage that. I’m telling you, this event will move you.”

Nick Carter, founder of Did You Play Your Guitar Today?, prepares to give away guitars to children without the means to buy guitars themselves.

Nick Carter, a guitar enthusiast and founder of Did You Play Your Guitar Today?

Nick Carter has a stockpile of guitars ready to be given out to people who want them the most.

Nick Carter, 27, created a Facebook page called "Did You Play Your Guitar Today?" in which the Siouxlander seeks to donate guitars to kids.