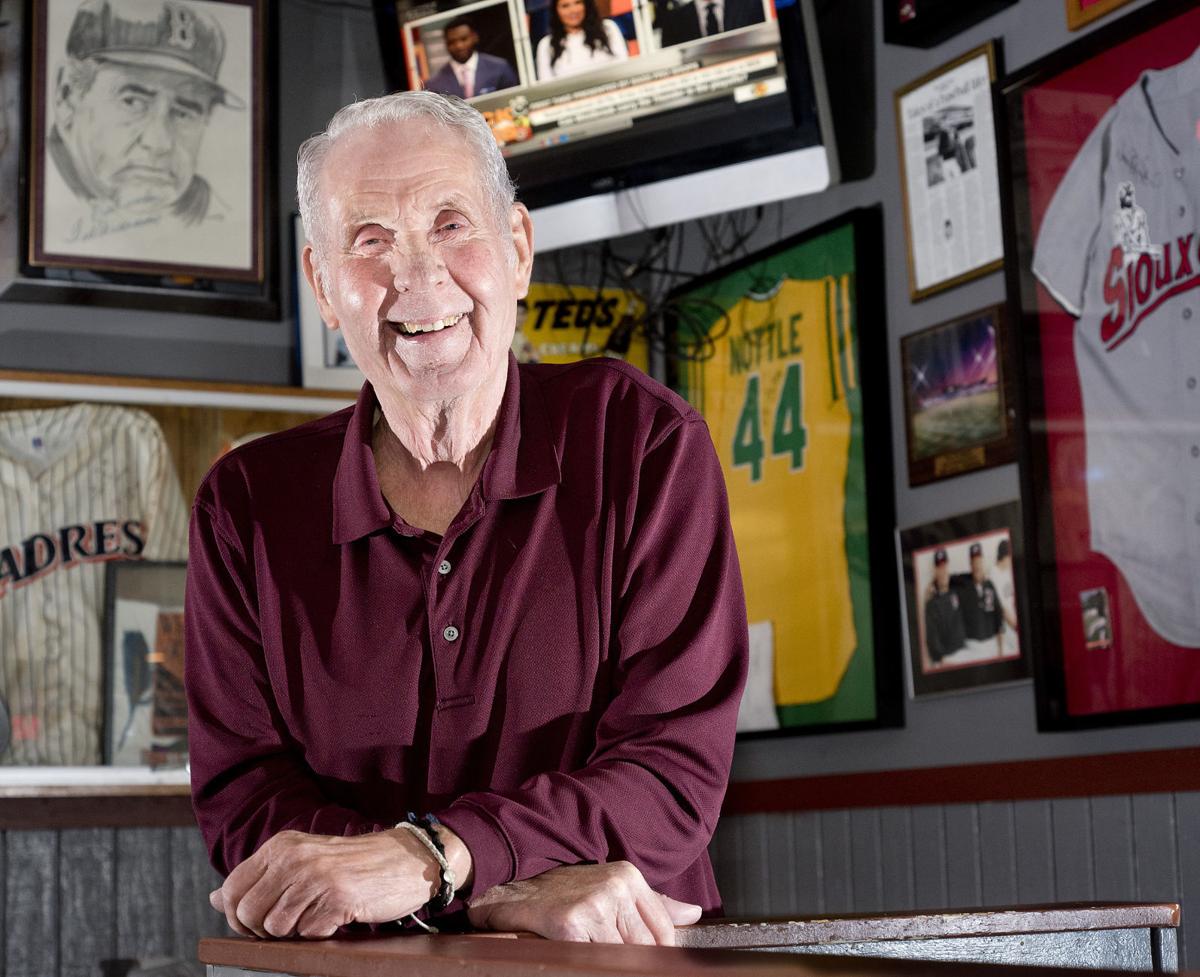 Annually making between 500 - 600 pounds of corned beef just for the occasion, The Point After's Bob Roe said St. Patrick's Day is always the busiest day of the year for the Transit Ave. bar. 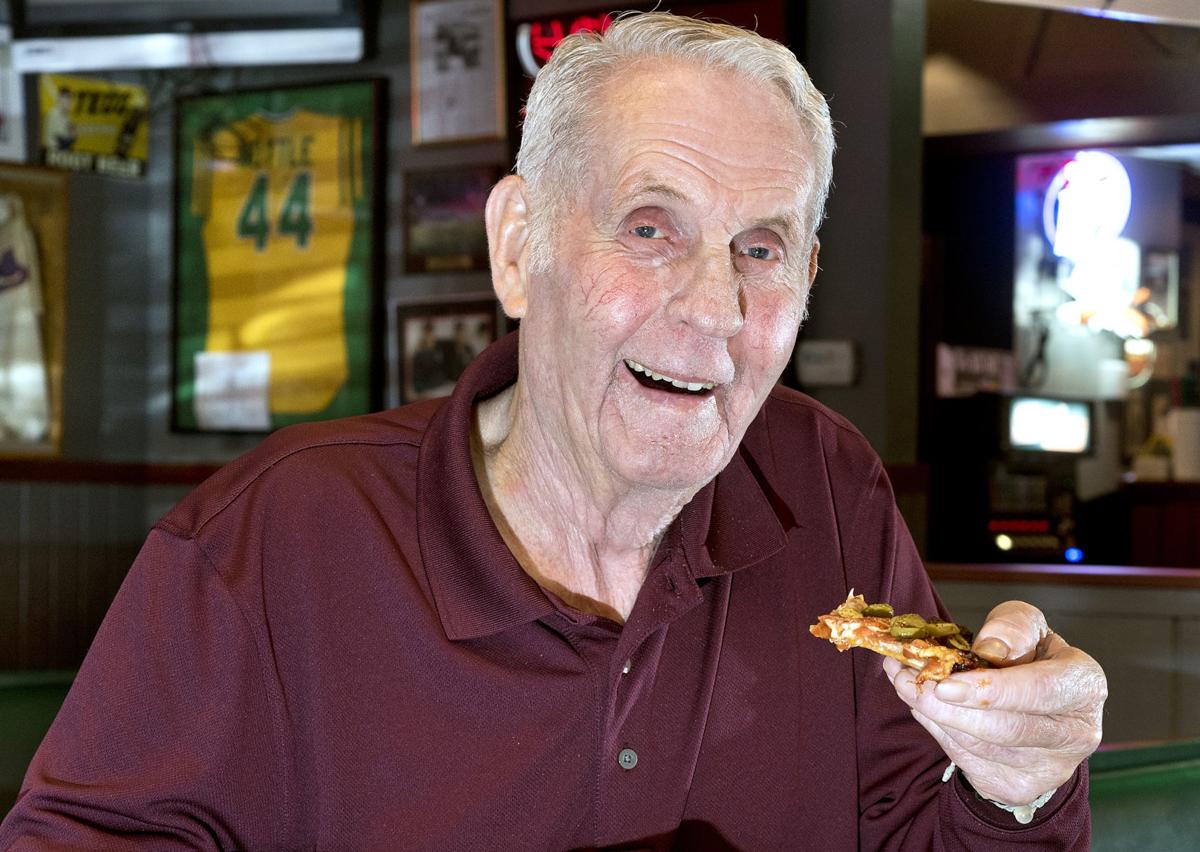 Bob Roe holds a slice of pepperoni, hamburger and green olive pizza, his favorite at Bob Roe's Point After. Although he continues to come in every morning, his daughter Terri Rexius has taken on more of a leadership role in the popular Transit Avenue restaurant.

How do you celebrate an incredible four first-place finish in the highly competitive Siouxland Choice Awards food category?

If you're Teri Rexius, manager of the Point After, you obsess over the one category in which the longtime Morningside eatery finished in third place.

"Our pizza got third place again, huh?" she said, shaking her head. "That's a heartbreaker."

Still, Rexius' dad and boss Bob Roe is more than satisfied with the 2320 Transit Ave. restaurant's No. 1 status in appetizer, bar food, chicken and take-out foods.

Roe is also pleased that Point After got the nod for having the best happy hour, according to Weekender readers.

"I truly don't mind coming in third place for pizza, after Jerry's and El Fredo," he said. "Sioux City has some great pizza and they're being made at locally owned establishments."

This is important to Roe, who opened his first pizzeria (Westside Pizza, 1200 W. Fourth St.) more than 42 years ago.

Roe followed up that success with The Point After in 1982 and the North End Zone, 4100 Floyd Blvd., nearly seven years ago.

You don't survive that long without doing something right.

Roe is quick to credit the three generations of his family who work at the restaurants.

"Only now, these customers are coming in with their children and grandchildren," Rexius interjected.

"You see, we've always been more of a family restaurant than a bar," Roe said. "Folks can bring in the kids and not worry about anything."

Consistency is also key when it comes to food.

The Point After has a full menu of American favorites ranging from wings to specialty burgers to pizzas that run the gamut from the traditional (the classic combo comes with pepperoni, Canadian bacon, sausage, bacon, hamburger and a garden full of veggies) to the weird (a Reuben pizza).

"People know what to expect when they come here," Roe said. "They will get excellent service and delicious food."

But will they get pizza deserving to rank as Siouxland's favorite Choice?

"Come back next year," Roe said. "I'll be here and so will the pizza."

Looking at the Hard Rock Hotel and Casino Sioux City, it is not hard to tell why this venue has garnered three wins in the entertainment categ…

Having a quandary about places to eat? Well, Weekender readers feel your pain ... and they've decided to add to your confusion.

A master of mixology: Austin Foster

Mexican Hot Chocolate Stout, the London Curveball and the Krack It! Kolsch.

Stone Bru: Beyond the beans

Congratulations are in order for Living Art Tattoo and its owner, Andy Bagshaw, who is now celebrating his third annual win in the Siouxland’s…

The horror, the horror!

Congratulations to horror metal rockers Devour Once Dead, whose legions of fans pushed them to the top position of the "local rock/metal band"…

With a name like Lil’ Red and the Medicated Moose Band, these winning musicians get attention. If you live in Sioux City and haven’t heard abo…

If there is one thing Siouxlanders have in common, it is the fact that we demand services, so here is a list of the winning service providers …

There is a phrase that goes around this town a lot; Sioux City pretty.

How to build a better burger (*Spoiler alert: add bacon and, then, add some more)

Even since Louis Lassen, a Dutch immigrant, began serving beef patties between two pieces of bread at Louis' Lunch in New Haven, Connecticut, …

A day of hockey and lap dog races

No barks about it, the Pucks and Paws event is about to invite pooches of all kinds to enjoy a game of hockey with their owners at Tyson Event…

Annually making between 500 - 600 pounds of corned beef just for the occasion, The Point After's Bob Roe said St. Patrick's Day is always the busiest day of the year for the Transit Ave. bar.

Bob Roe holds a slice of pepperoni, hamburger and green olive pizza, his favorite at Bob Roe's Point After. Although he continues to come in every morning, his daughter Terri Rexius has taken on more of a leadership role in the popular Transit Avenue restaurant.