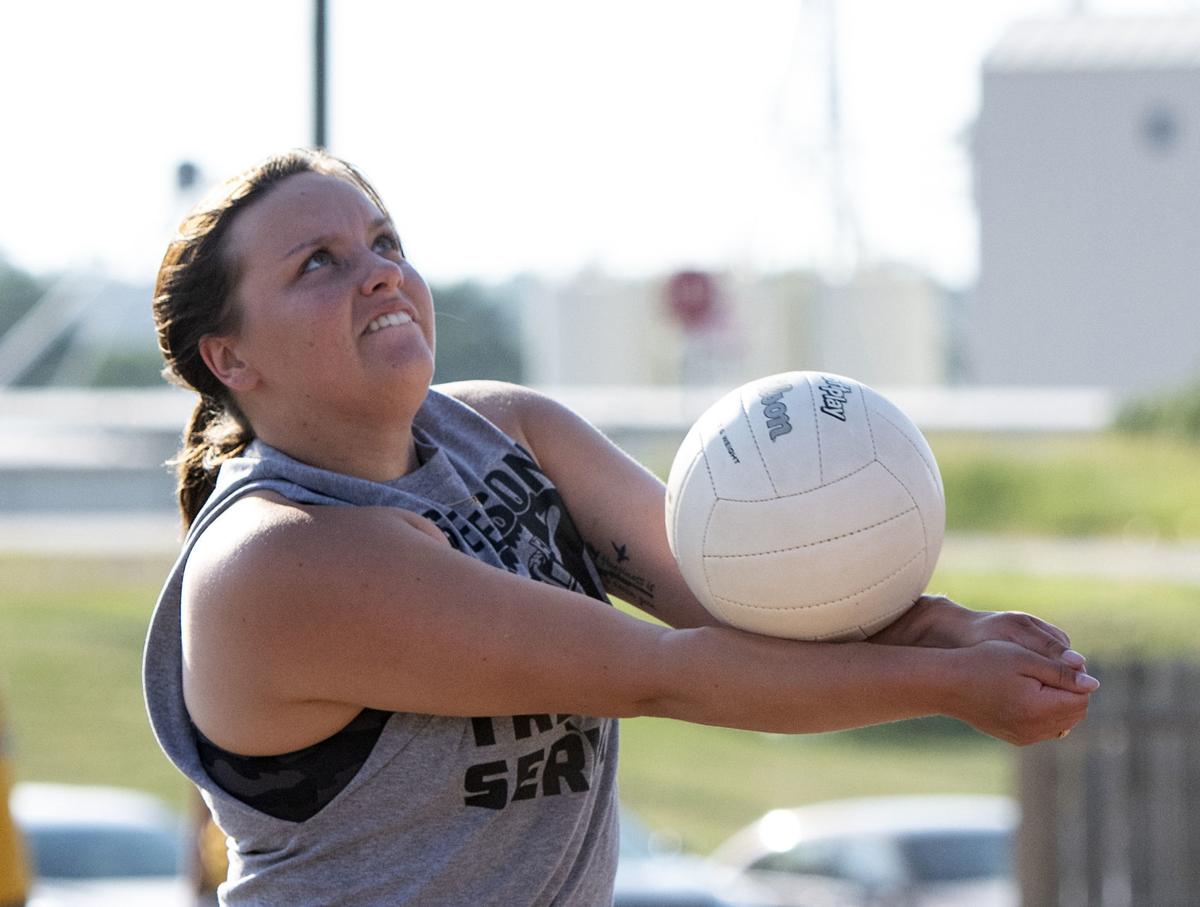 Carre Stevenson bumps the ball during a volleyball game at the Ickey Nickel Bar & Grill. 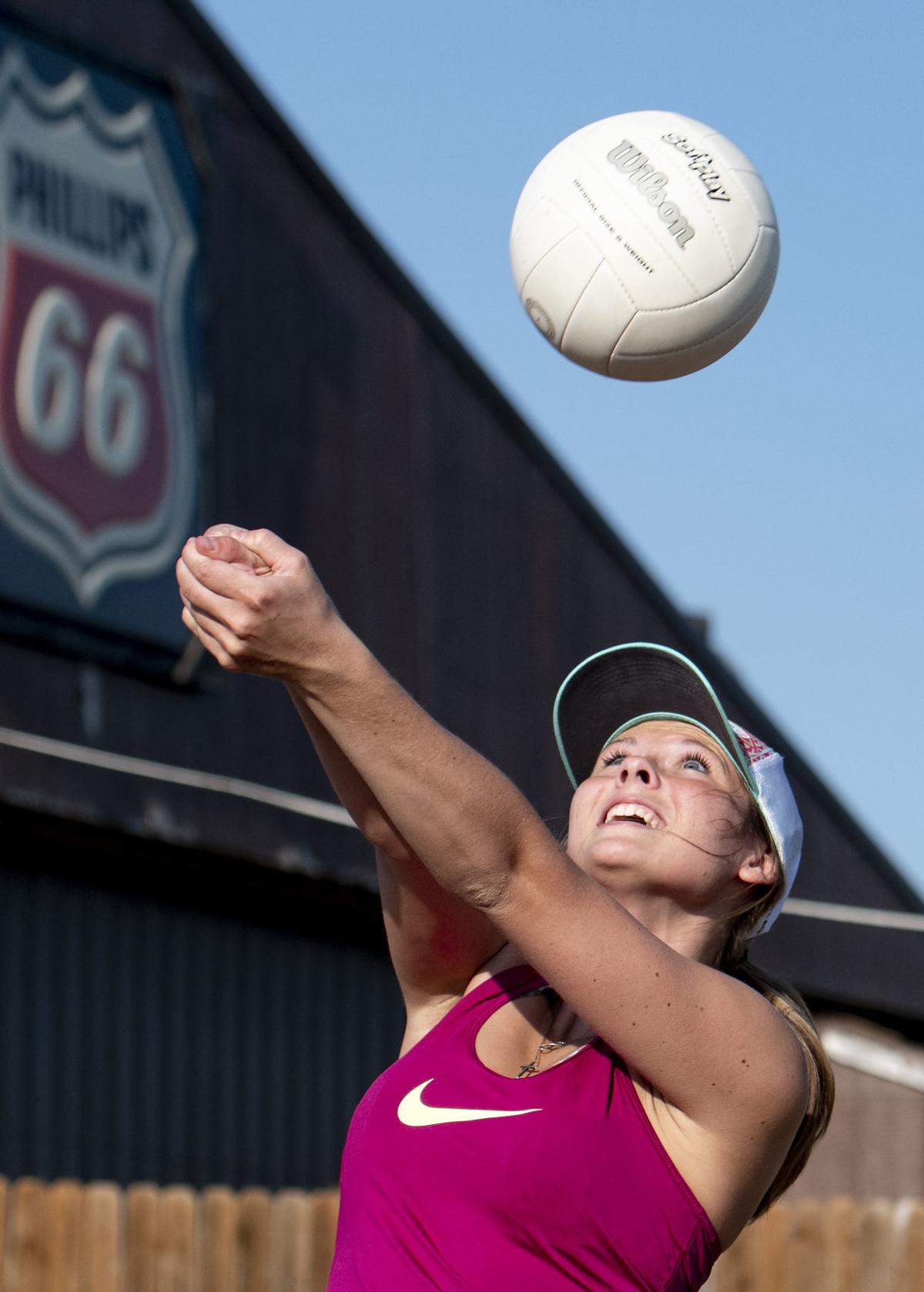 Haley Anfinsen bumps the ball during a volleyball game. 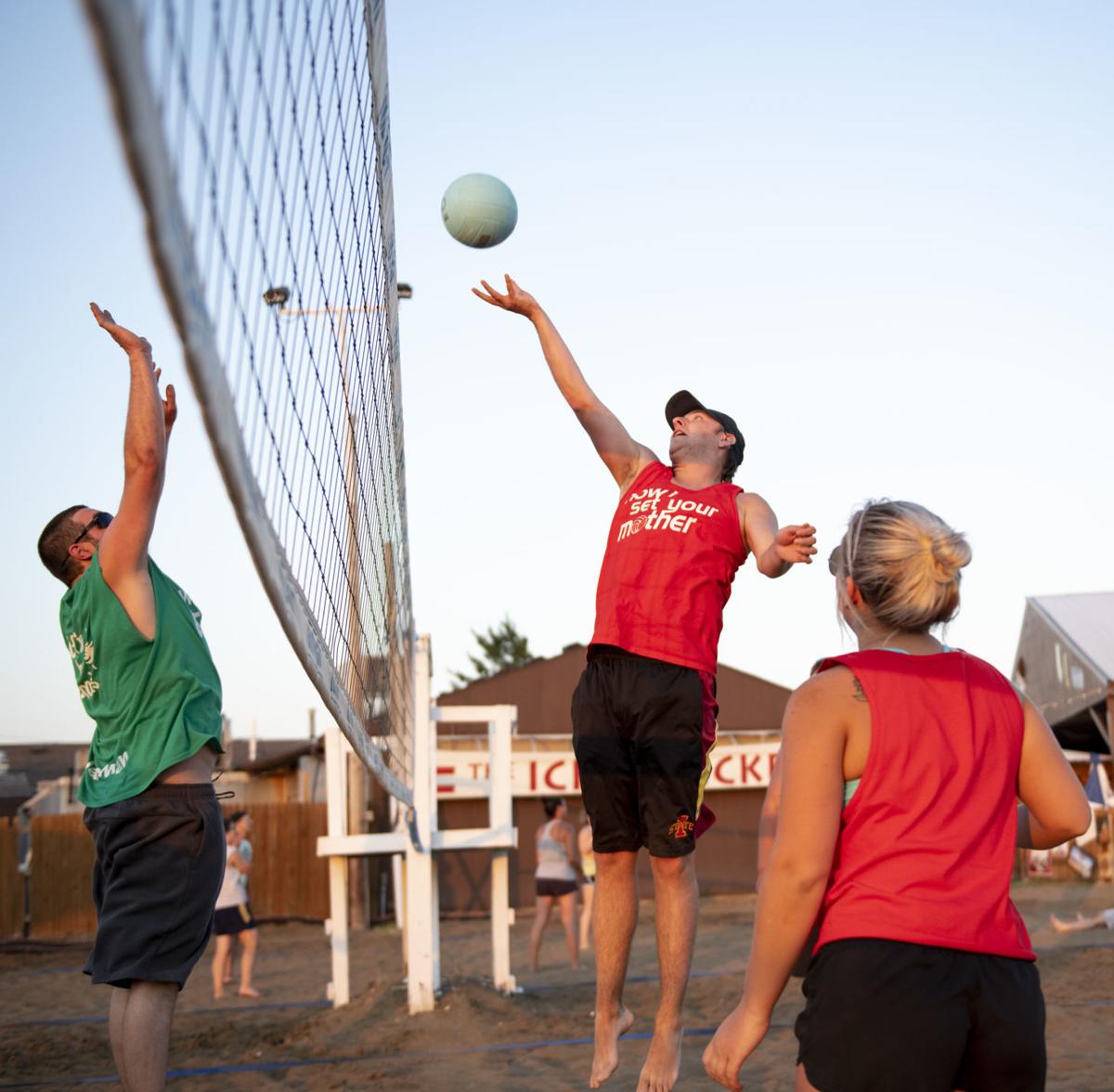 Liam Bald, right, tips the ball over the net as Bry Jasman reaches to block him during a game.

Volleyball tournaments aren't stopping for the summer. Officials at Ickey Nickel Bar and Grill say they're moving ahead.

Carla Hansen, a manager at the Ickey Nickel, said while they are doing things differently this year to adapt to coronavirus concerns, they were able to make the activity happen. Compared to other years, they had fewer teams sign up, going from 175 to 100 teams.

“I think a lot of people were standoffish at first because of what was going on, but it’s going pretty well," she said.

Games start at 6:30 p.m. Monday through Friday, but some days are busier than others.

Hansen said team captains choose the day their teams play. Because of this, she said Mondays are their slowest -- six teams play -- but the numbers pick up Tuesday.

“It ranges from the teams that just want to have fun and play,” Hansen said. “And then there is the power league, which is the ones who are really serious about playing volleyball."

“A and B are going to be the more serious leagues, they’re more competitive, and they are taking it more seriously,” Brittney Hughes, who works closely with the teams, said.

Hughes said that Divisions C and D are the more relaxed groups -- the people who play for fun.

Hansen said that she sees all kinds of people sign up to play, from teams with people 18 or 19. There are also teams with older players competing.

Company teams are also a factor.

Hansen said that there are usually six people on a team, although they have seen teams with four people.

Hughes said that her team has 12.

“Just make sure you have enough people to play,” Hansen said.

During the day, Hansen said, high school volleyball players use their courts.

Hansen said that North High School started to utilize the courts during the day because its students have nowhere else to practice.

Hansen said the facility is taking every precaution to keep people safe. Volleyballs are sanitized; hand sanitizer is available at every bar.

“Everybody seems to be doing what they need to do,” Hansen said. “We haven’t had to police it much.”

Hansen said that the volleyball tournaments are open to everyone. All age groups can watch the games.

“A lot of the limitations and restrictions have been lifted” by state officials, executive director Dustin Cooper said. “With that being said, we still have very strict policies.”

Are you ready to climb another mountain?

Carre Stevenson bumps the ball during a volleyball game at the Ickey Nickel Bar & Grill. 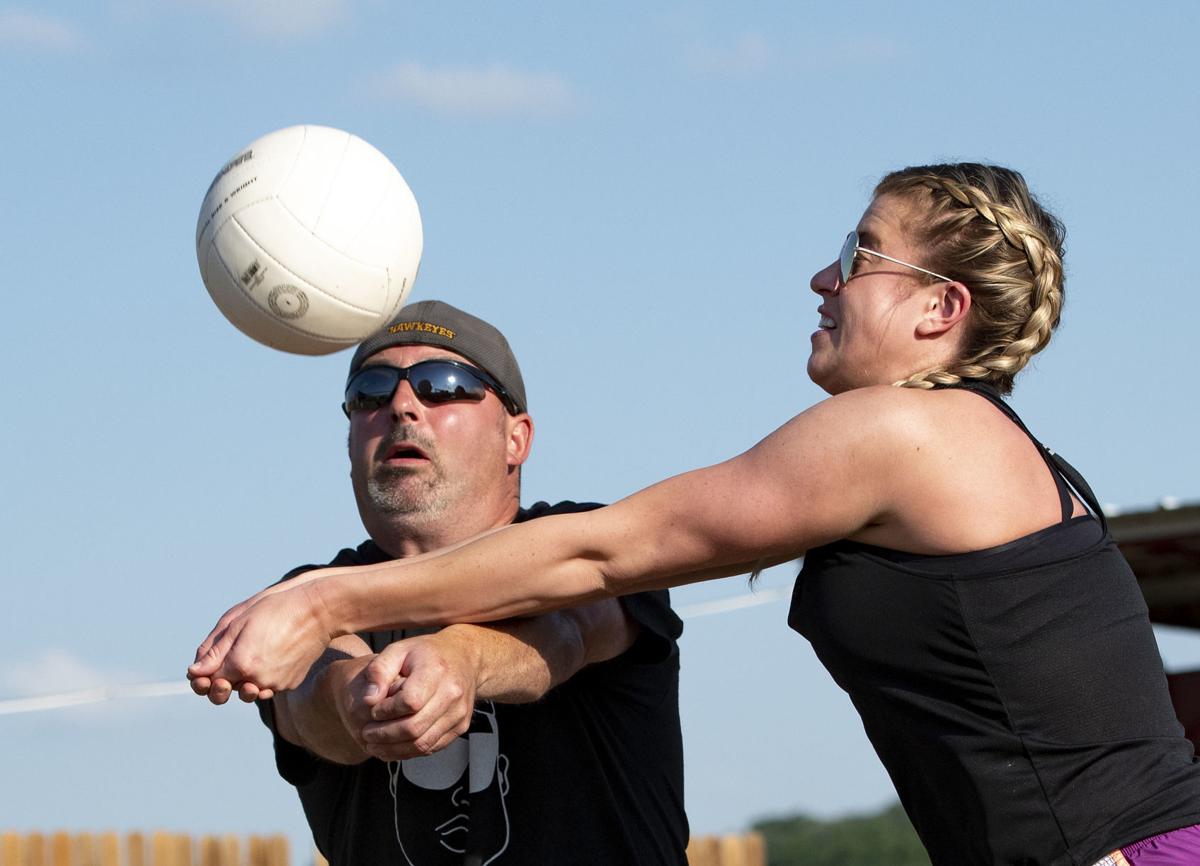 Mike Beamon and Morgan Potts race each other to the ball. 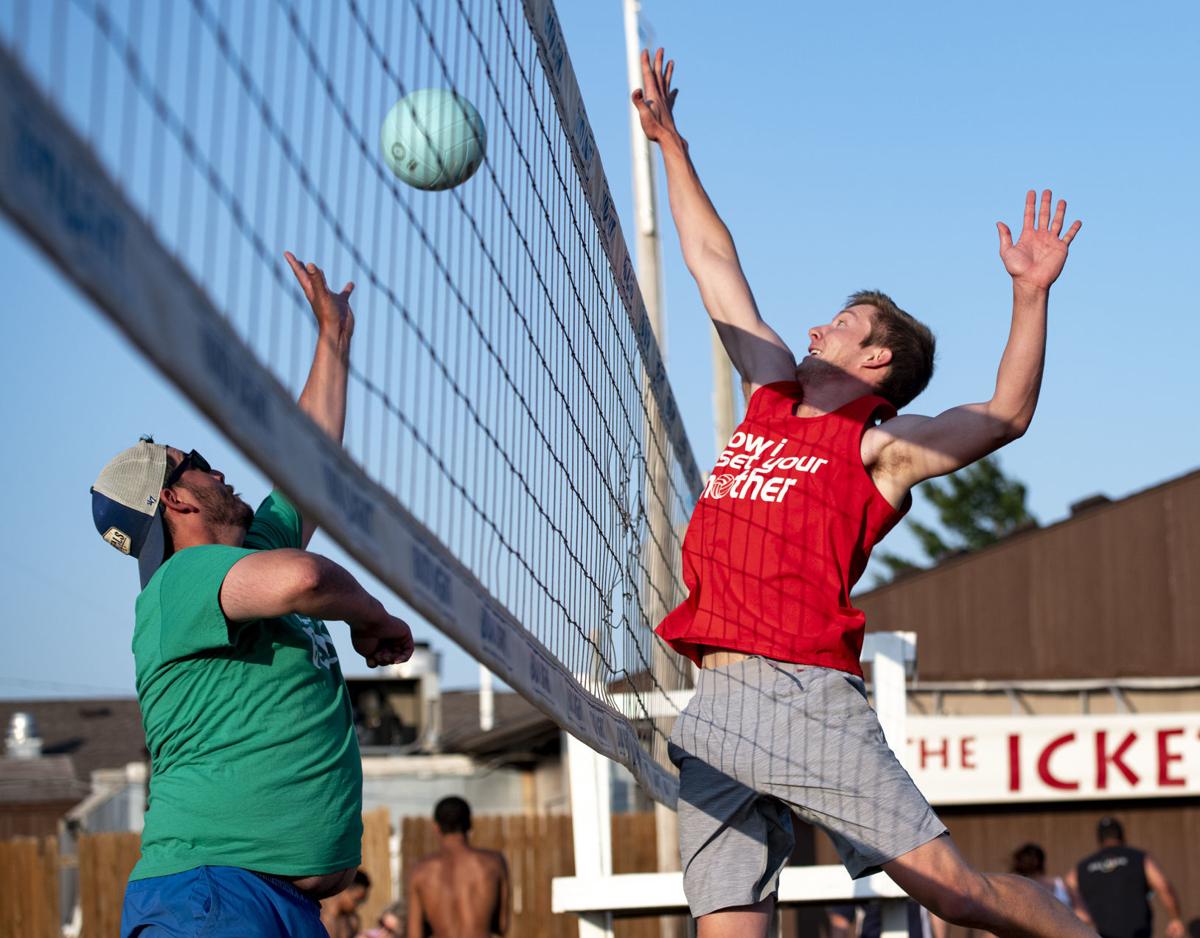 Alec Hauge, right, spikes the ball as Nate Gomez reaches to block his shot, at the Ickey Nickel Bar & Grill. 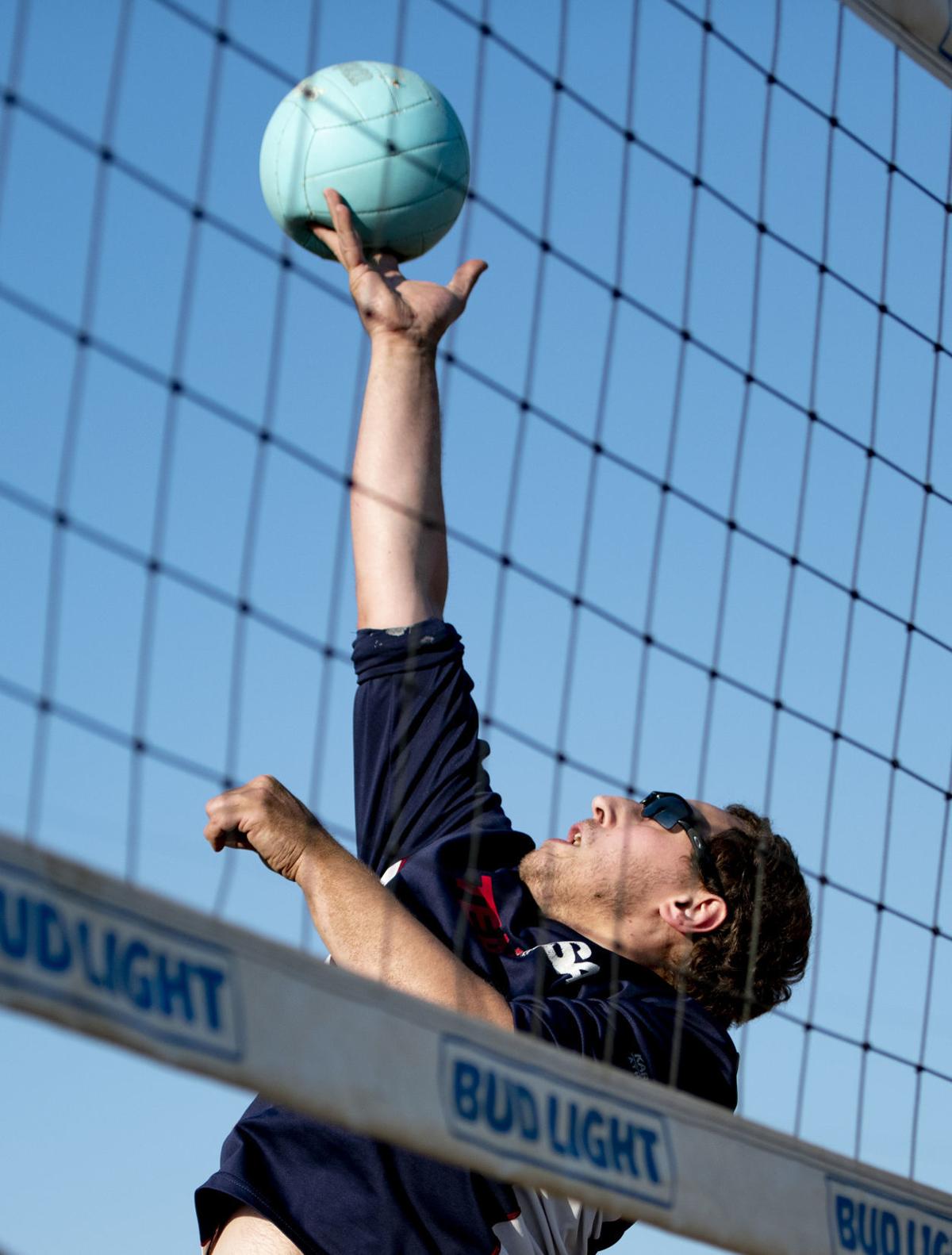 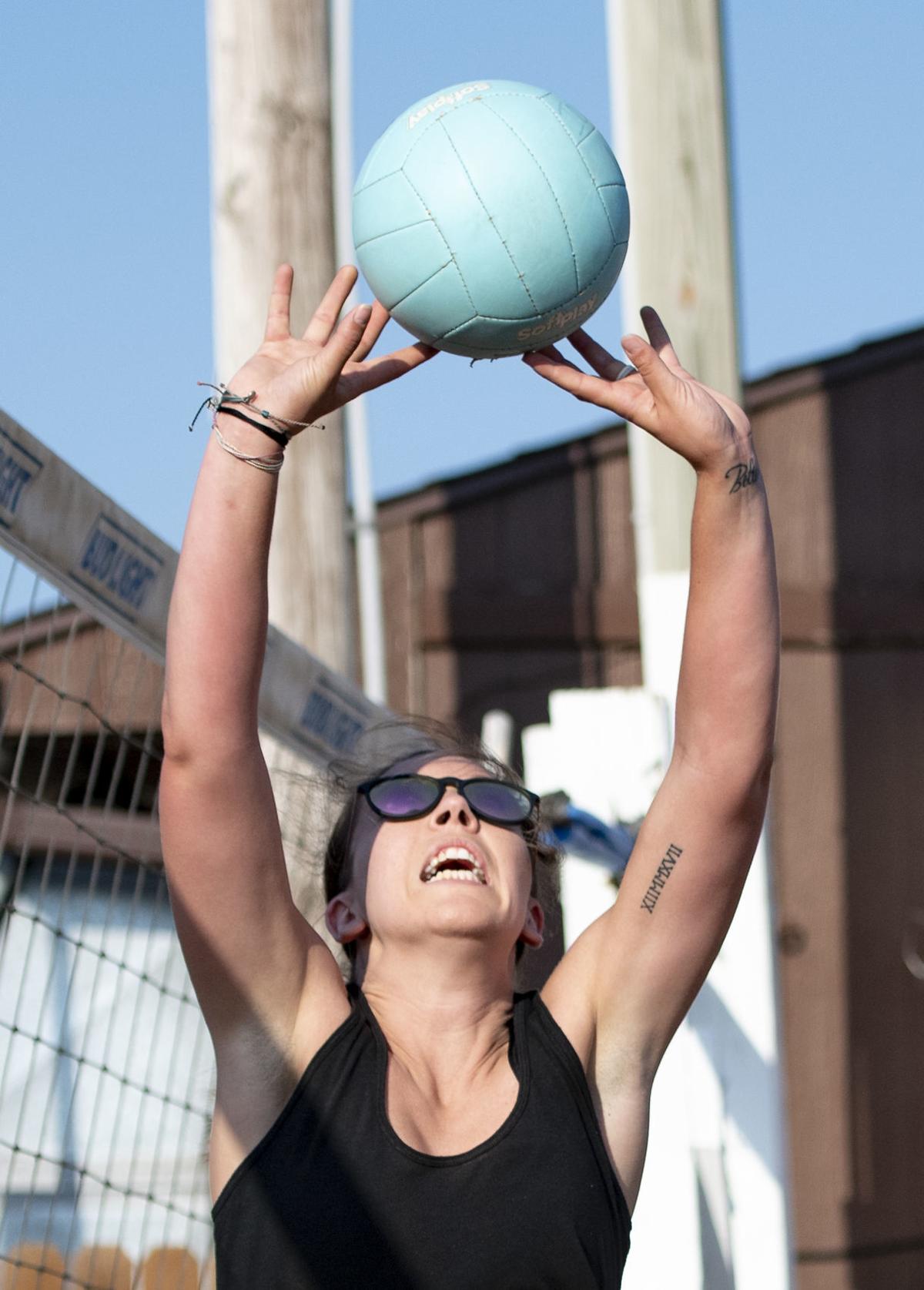 Mollie Pry sets up the ball for a shot.

Haley Anfinsen bumps the ball during a volleyball game.

Liam Bald, right, tips the ball over the net as Bry Jasman reaches to block him during a game.