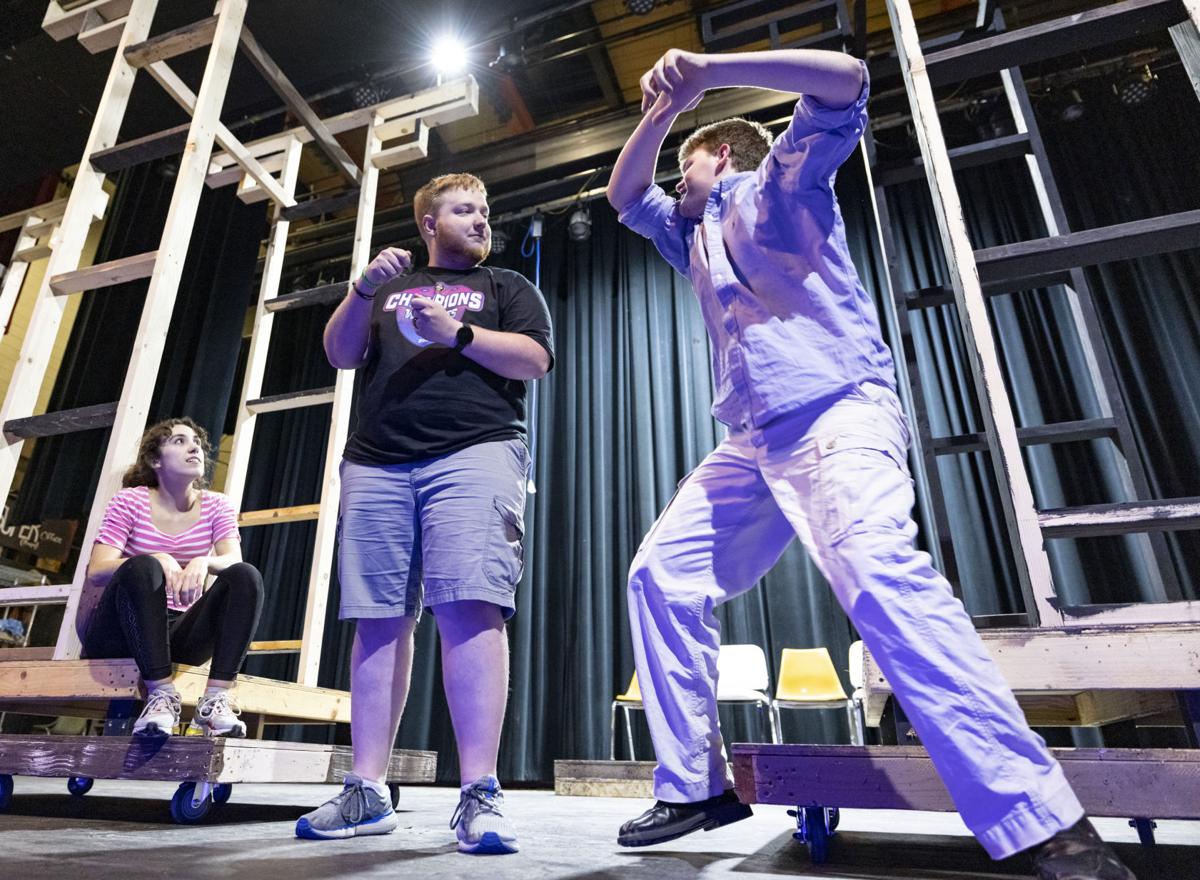 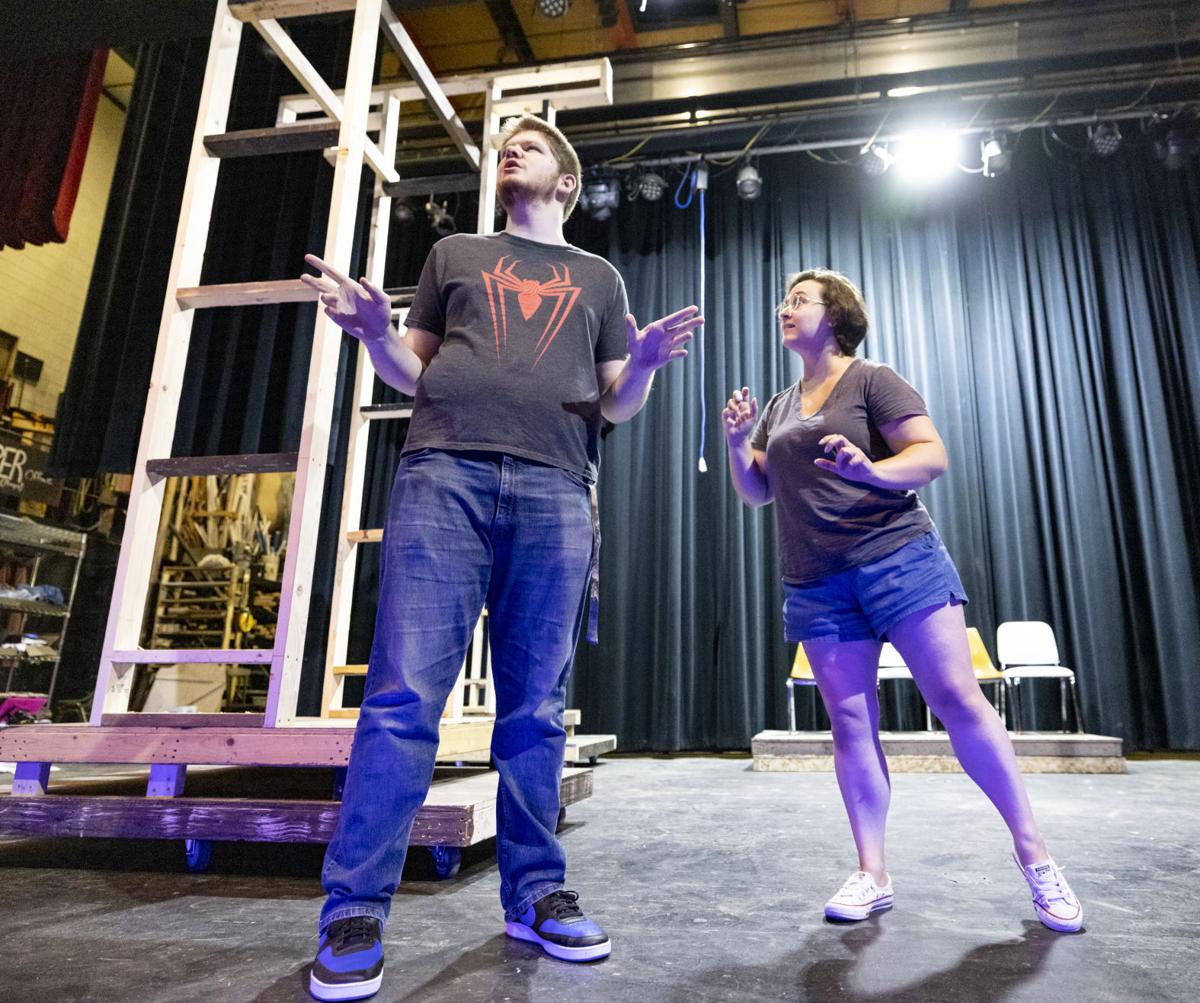 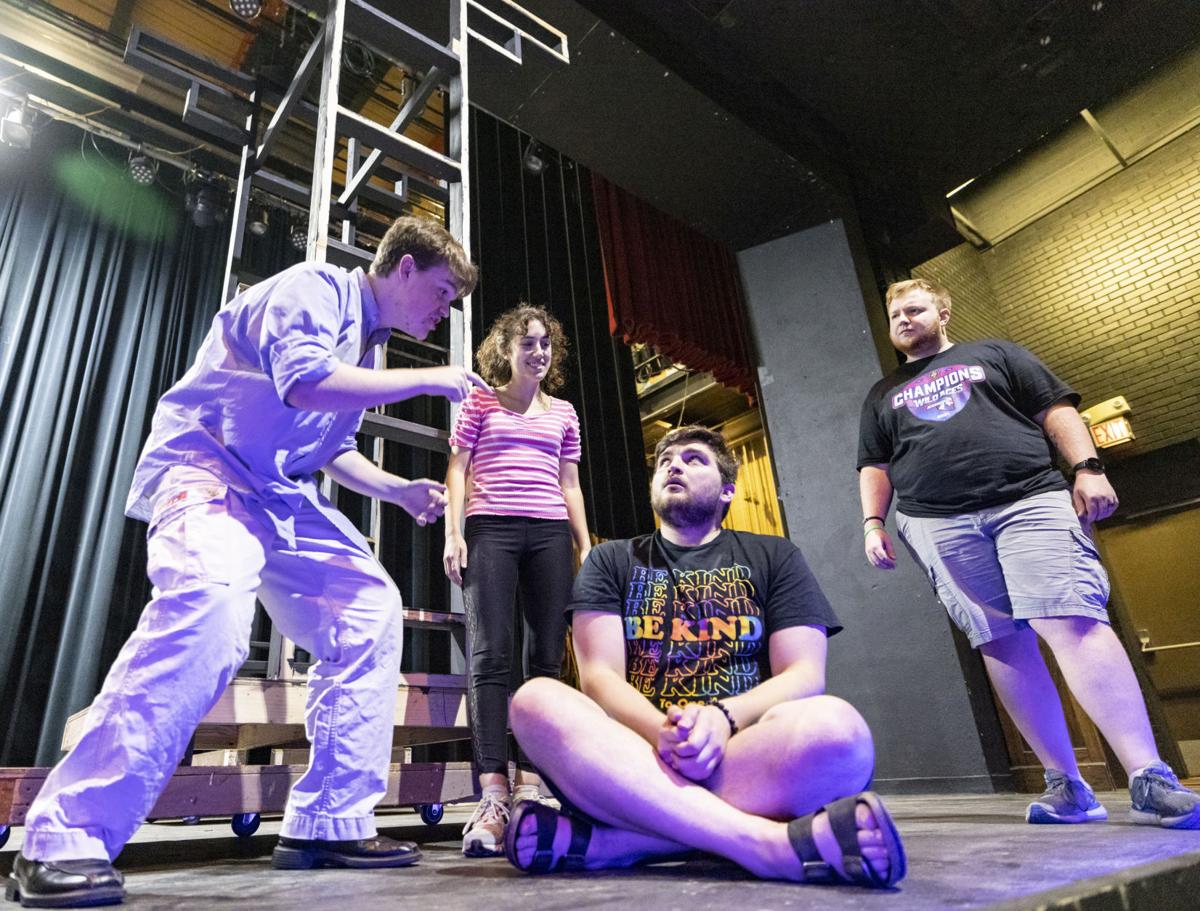 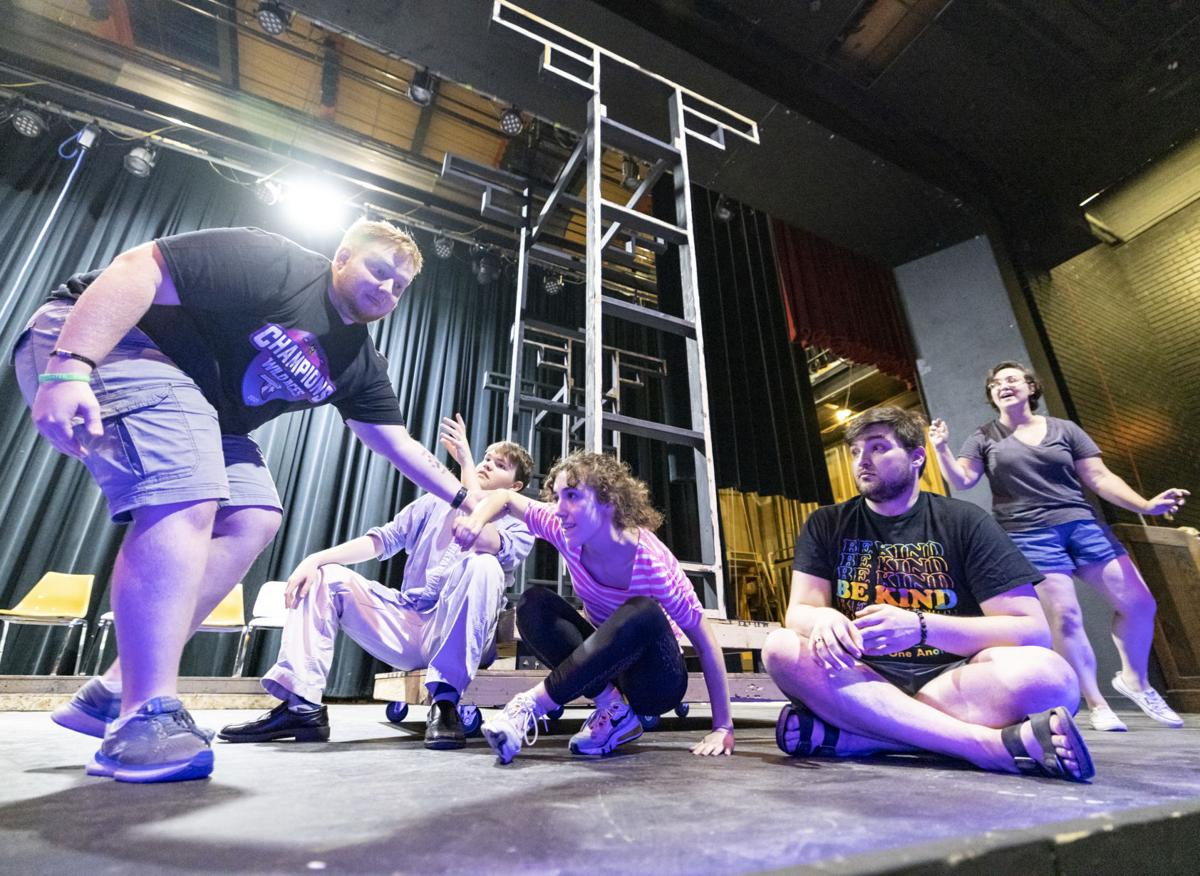 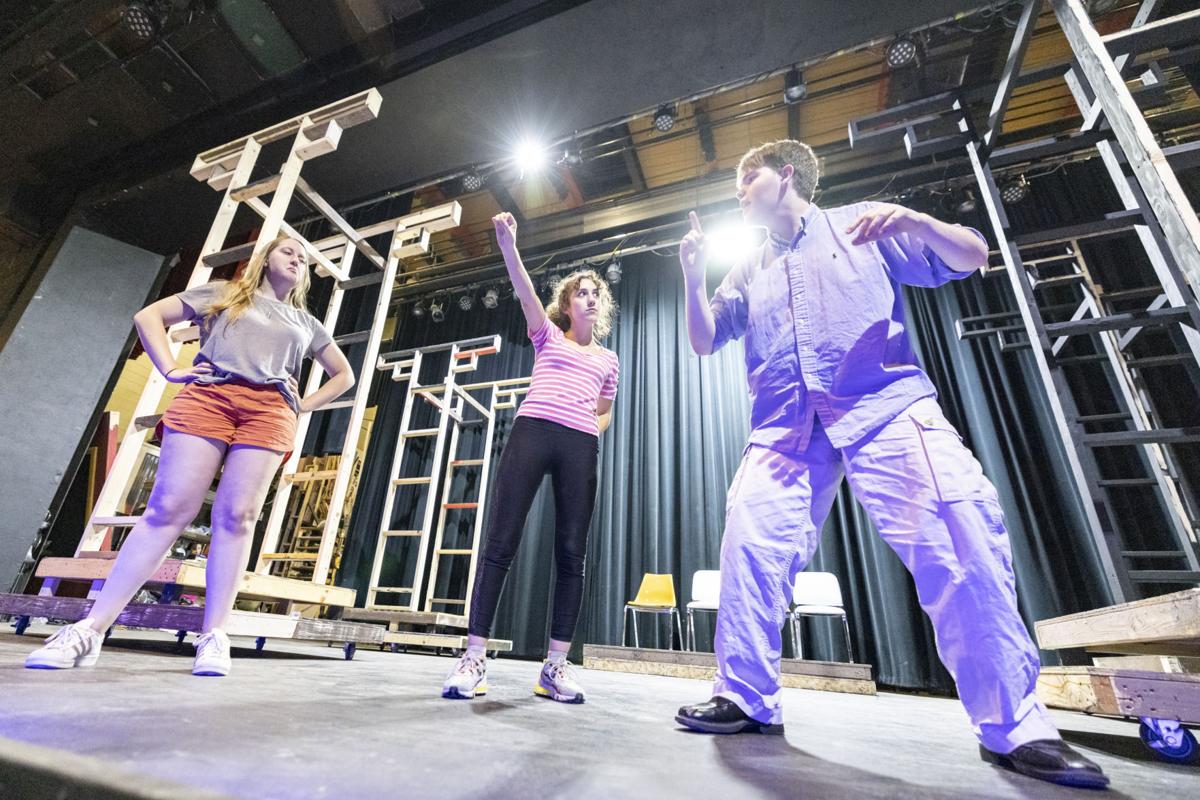 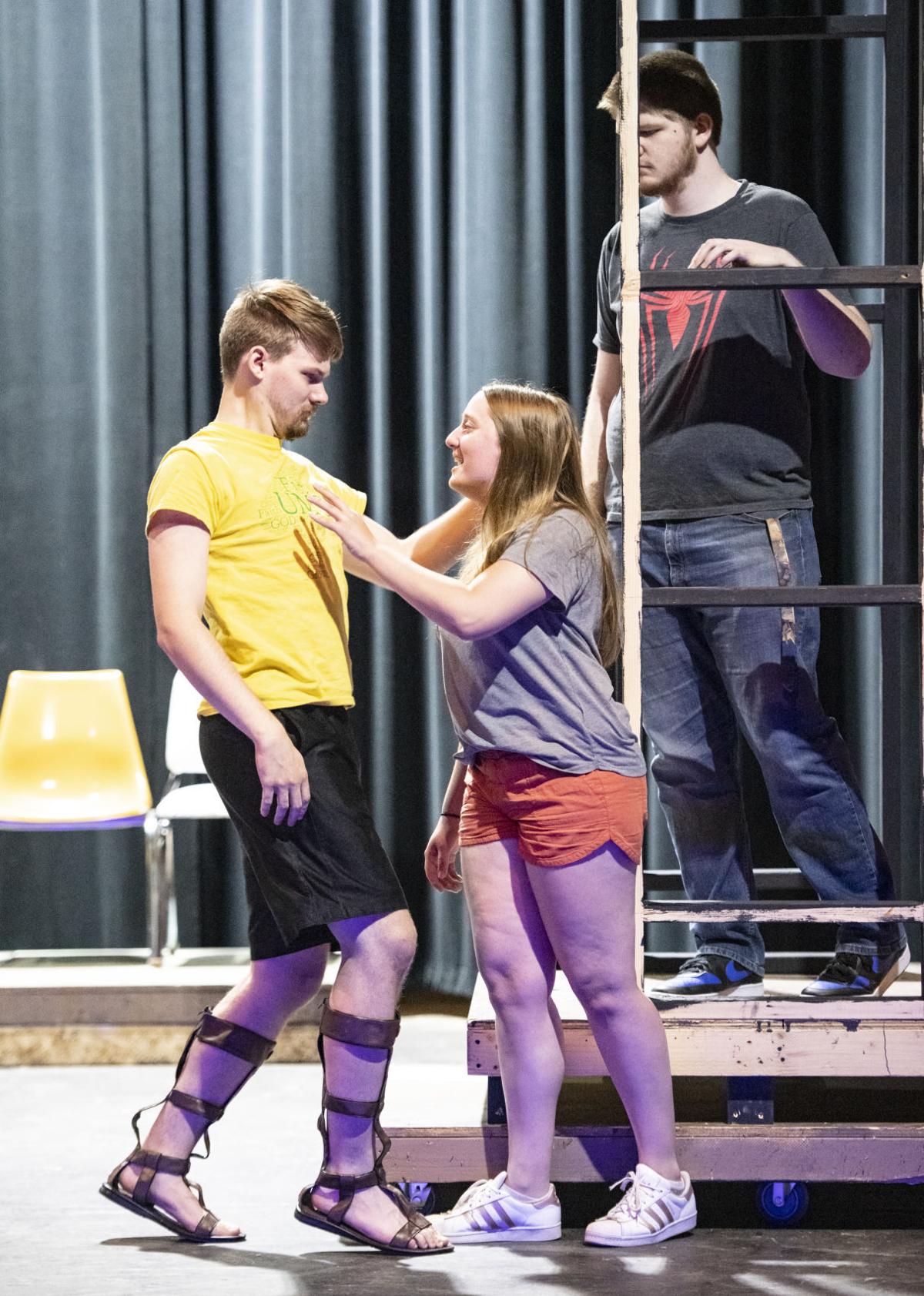 Actors Brock Bourek, left, and Kaitlyn Baljeu rehearse a scene with Nathaniel Roop in the background for a production of "A Midsummer Night's Dream."

Romantic entanglements, weird personalities and so many love triangles that you'd need a scorecard to identify the players.

The new season of "Love Island" or "The Bachelor," right?

What if we also said it involved a troupe of actors, the moon, a forest inhabited by fairies and a mischievous sprite named Puck?

It's now obvious that we're referring to William Shakespeare's "A Midsummer Night's Dream," which is a comedy with interlocking subplots that revolve around the marriage of Theseus and Hippolyta.

Think of this 16th century play as being as a dry-docked version of "The Love Boat," but without the tacky laugh track and substantially more iambic pentameter.

According to Morningside's performing arts assistant professor Taylor Clemens, this show is unusual for several reasons.

First, "A Midsummer Night's Dream" was made possible by a $5,000 Gilchrist Foundation grant as well as a sponsorship grant from Great Southern Bank.

Second, it will be performed in summertime heat. (To be fair, the sun should be setting around showtime, plus audiences will enjoy a fireworks display following Friday night's show).

Third and, most important, this will mark the only time Clemens has ever directed a full-length Shakespearean play.

"I've directed scenes from Shakespeare in the past," he explained. "This is the first time I've tackled an entire Shakespeare play."

Not only that, but Clemens said his wife, a dramaturg, was given the none-too-enviable task of paring the three-hour-plus "A Midsummer Night's Dream" into a more manageable 90-minute show.

"Back in Shakespeare's time, audiences must've had longer attention spans," Clemens said. "Even I'd have trouble sitting through a three-hour play."

Another thing that has changed is language. This had initially worried Clemens when he was auditioning actors.

"I don't think Shakespeare had been performed locally for quite some time," he said. "I thought the language would be challenging to actors."

That would be true for actors, who had to convey the often archaic dialogue to audiences who were also not likely to be Elizabethan-era literate.

"You have to know the history in order to present it convincingly to an audience," Clemens said.

Luckily, he was able to cast actors like Breeanna Pierce, a Morningside student who plays the pivotal part of Puck.

"I read Shakespeare in high school," she said. "So, that helps a lot."

"The best part about playing Puck is that is such a physical part," she explained. "You get to have a lot of fun with this role."

Which is one of the show's biggest selling points.

"'A Midsummer Night's Dream' is one of Shakespeare's most popular plays because it is one of his lightest," Clemens said. "It is as far from a tragedy as you can get. Since it tells multiple stories and doesn't revolve around a central figure, it is easy for audiences to get into."

Indeed, he'd like the performance of classical plays to become a summer staple at Morningside.

"I'd love to see classical shows like Shakespeare or a Greek drama to be tackled once every summer," Clemens suggested. "Whether it is in its original form or a more modern retelling, classic plays have withstood the test of time."

WHEN: 8 p.m. Friday, Saturday and Sunday

SOUTH SIOUX CITY -- All students enrolled at South Sioux City schools will be provided free meals during the 2021-2022 school year, the distri…

Paranormal Cirque is a circus with a spooky, sexy twist

SIOUX CITY-- The circus is in town, but don't expect to see any dogs, ponies or, even, clowns doing schtick.

SIOUX CITY -- Even though it was inaugurated 28 years ago, Erin Webber-Dreeszen still reminded herself that this year's ArtSplash will only be…

Actors Brock Bourek, left, and Kaitlyn Baljeu rehearse a scene with Nathaniel Roop in the background for a production of "A Midsummer Night's Dream."