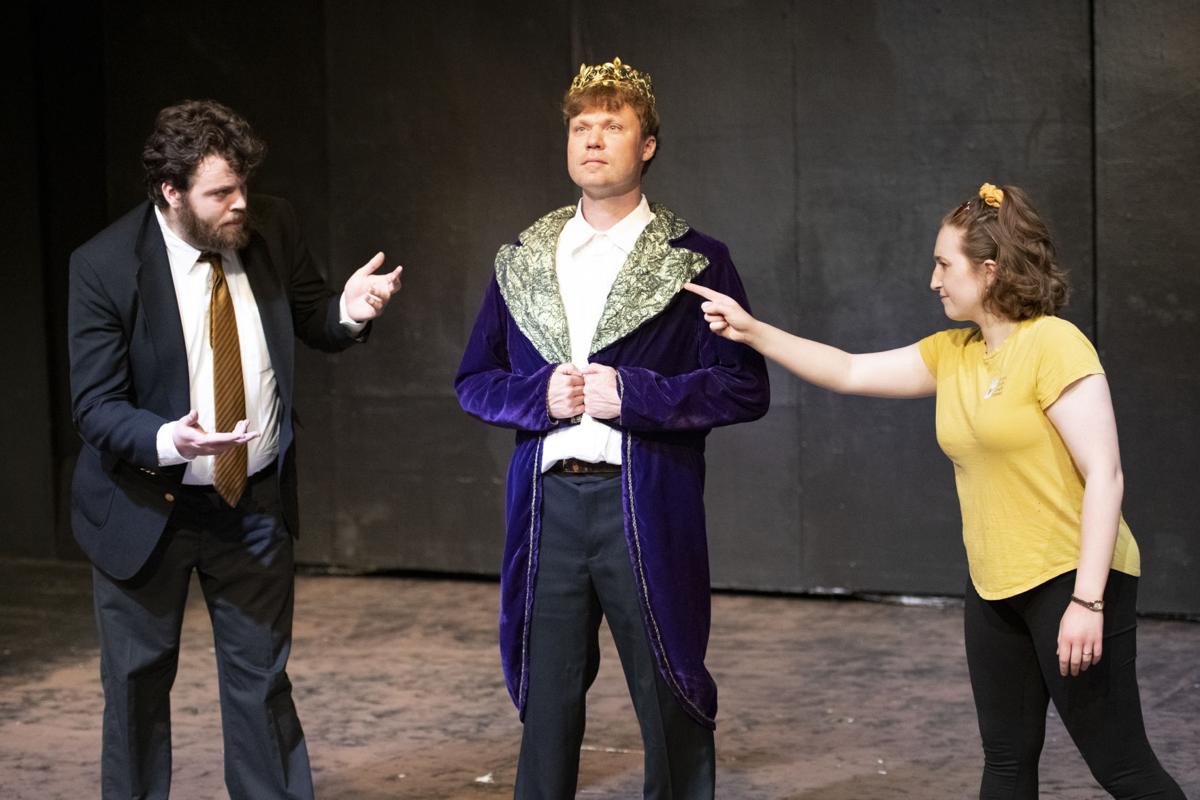 Actors Collin McCue, left, Eric Sorensen, and Meredith Malenosky, right, perform a scene from "The Brothers Grimm Spectaculathon" on stage at the Sioux City Community Theatre. A send-up of 209 fairy tales from the Brothers Grimm, it will be performed for seven shows, starting at 7:30 p.m. Thursday. 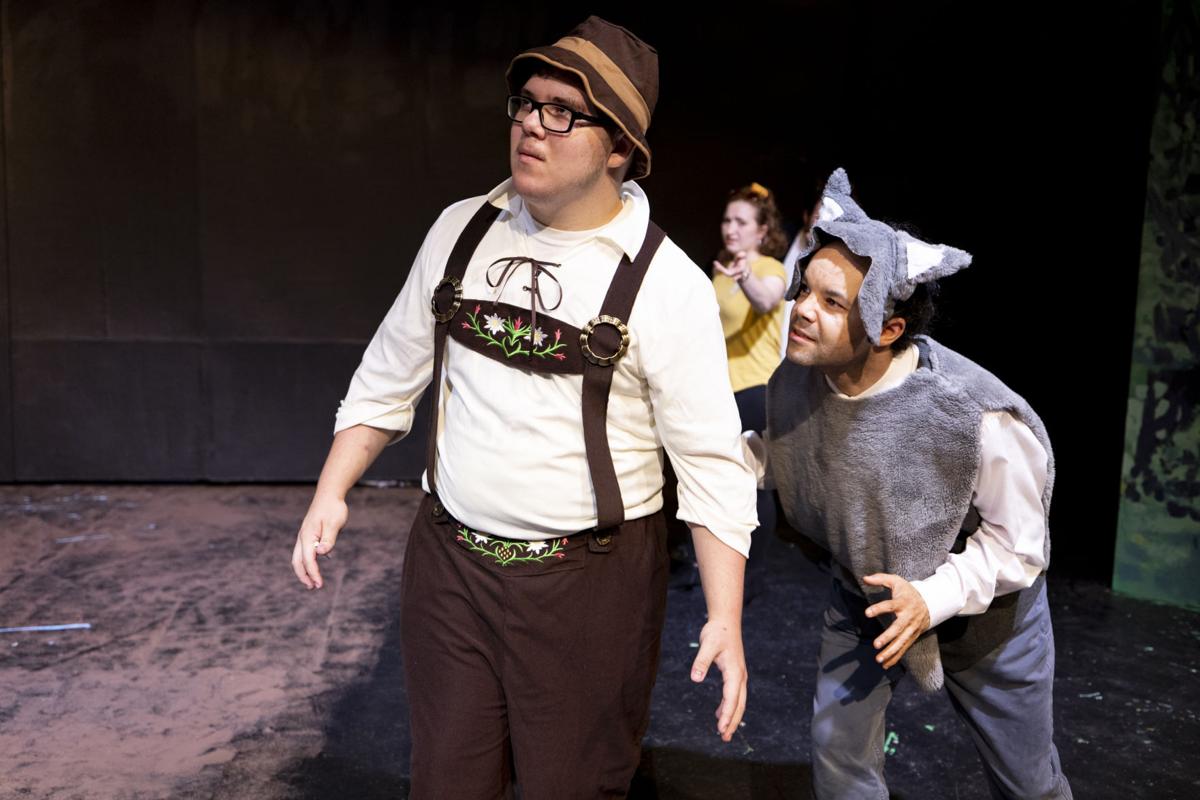 Actors Briar Bottjen, left, and Chad Gaul, right, perform a scene from "The Brothers Grimm Spectaculathon" on stage at the Sioux City Community Theatre. A fast-paced, irreverent parody of fairy tale, the shows is geared towards audiences, 12 and older. 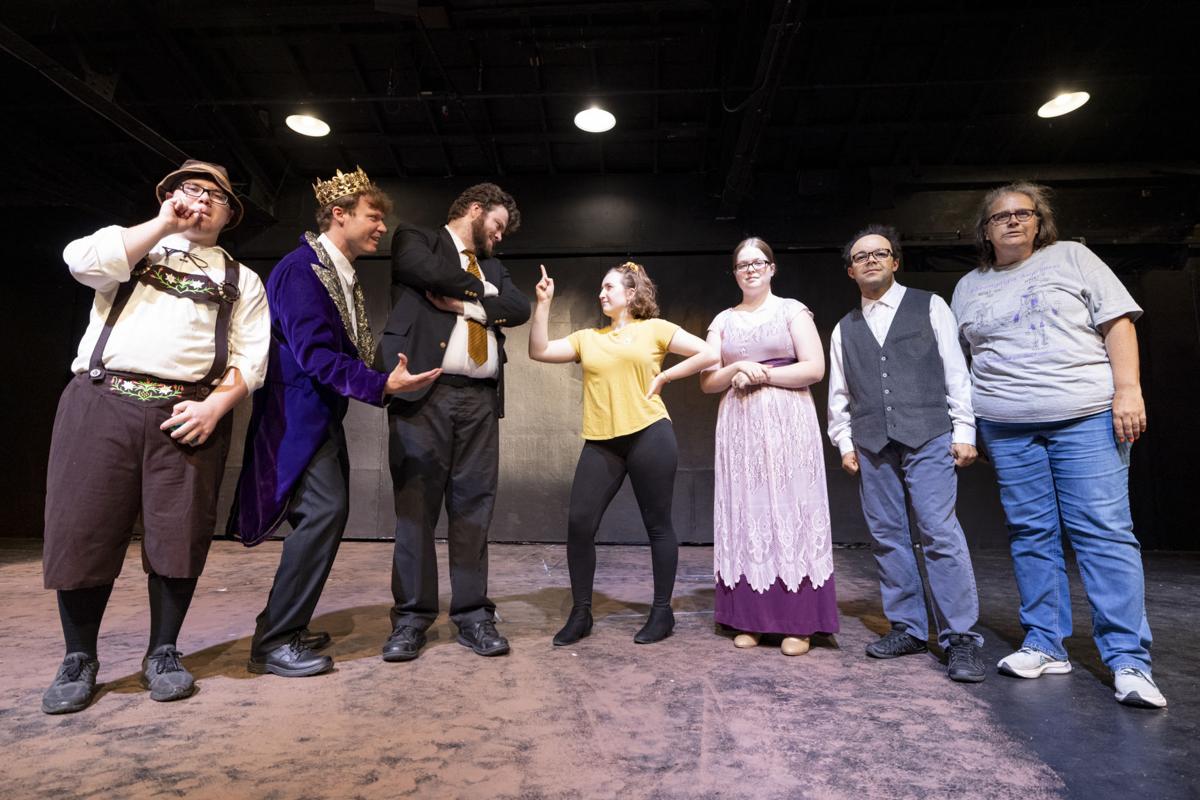 What do you get when you have one play, two directors, a handful of actors, 209 individual stories, and characters ranging from sneaky dwarves, talking fish and a cross-dressing wolf?

If you said this sounded like a spectacle that even the Brothers Grimm couldn't have dreamed up, you'd be right.

Boasting a script by playwright Don Zolidis, "The Brothers Grimm Spectaculathon" takes every fairy tale you ever loved as a kid, turns it on its ear and, then, supersizes it.

The latest Sioux City Community Theatre production, "The Brothers Grimm Spectaculathon" will be performed live at 7:30 p.m. Friday and Saturday, as well as July 29, 30 and 31 at 1401 Riverside Blvd. Matinee performances will take place at 2 p.m. Sunday and Aug. 1.

According to Eric Sorensen, the chance to parody characters like Snow White, Cinderella and Rumpelstiltskin was a natural for the community theater group as it was coming off of a season that was abbreviated due to COVID concerns.

"We wanted to do a show that was fast-paced and packed with laughs," he explained. "Everyone has been cooped up for so long."

In addition to playing the part of a fairy tale prince, Sorensen shared co-directing duties with Benji Cotter.

"I think the audience has missed seeing live, local theater," Cotter added. "It is also true for the people who put on plays."

Which is why Sorensen and Cotter, both Community Theatre vets, began putting out calls for cast members more than two months ago.

"This is one of the few casts where there are no first-timers," Cotter said moments before a dress rehearsal. "The cast for this show is made up entirely of experienced actors."

That included Meredith Malenosky and Colin McCue, who play the part of "The Brothers Grimm Spectaculathon" two competing narrators.

"My narrator is serious and by-the-book," Malenosky explained.

"While my narrator is more willing to let things slide a bit," McCue maintained.

OK, that may explained the presence of Briar Bottjen, who played the part of "Hansel & Gretel's" Hansel as a little boy who enjoys smoking Menthol cigarettes when he isn't munching on architecture.

"The Hansel in this play is bit different than in the fairy tale," he admitted.

Indeed, Bottjen will actually be playing as many as six other characters overs the course of the show.

"Well, we are working with a small cast and we do need to go through 209 different stories," Sorensen said. "That means everyone is expected to play multiple parts."

"I think it averages out to telling three stories during every minute of the show," McCue added.

Phew, that's a lotta stories. Thank goodness the Brothers Grimm had a surprisingly vast repertoire of fairy tale characters, including girls in red riding hoods, amphibians who think they're princes and, even, the devil, himself.

Certainly, Cotter and Sorensen credited their cast of experienced actors for the ease of this production.

"We were off the book within the first few rehearsals," Malenosky said. "The show came together very quickly."

It was the actors who often came up with pieces of business for their characters to perform.

"As directors, Benji and I both have a community mindset," Sorensen said. "If a piece of action works for the character within a particular scene, we won't have an issue with it."

A few days before showtime, the cast of "The Brothers Grimm Spectaculathon" continued to run lines and rehearse on the sparsely decorated stage of the Sioux City Community Theatre.

While Sorensen donned a velvet coat and crown for his performance as a prince, his co-director Cotter oversaw the action from a control room located past the seats assigned for audience members.

"For a town our size, Sioux City does have a nice theater community," Cotter noted. "It is not uncommon for actors to go from theater to theater, simply because the talent pool isn't that large."

Having said that, he noted some theater groups in larger communities have had to close up shop due to the pandemic.

"Like all fine arts, we took a hit during COVID," Sorensen said. "But we're committed to the return of live theater in the area."

Malenosky nodded her heard in agreement.

"Nothing beats seeing a play being presented live on a stage," she said. "And as an actor, you get so much energy from the response an audience gives to your performance."

In fact, you can describe that response as being a "spectaculathon," with a "Happily Ever After" at the conclusion of each performance.

WHAT: "The Brothers Grimm Spectaculathon," a satirical production of Don Zolidis' play

Actors Collin McCue, left, Eric Sorensen, and Meredith Malenosky, right, perform a scene from "The Brothers Grimm Spectaculathon" on stage at the Sioux City Community Theatre. A send-up of 209 fairy tales from the Brothers Grimm, it will be performed for seven shows, starting at 7:30 p.m. Thursday.

Actors Briar Bottjen, left, and Chad Gaul, right, perform a scene from "The Brothers Grimm Spectaculathon" on stage at the Sioux City Community Theatre. A fast-paced, irreverent parody of fairy tale, the shows is geared towards audiences, 12 and older.