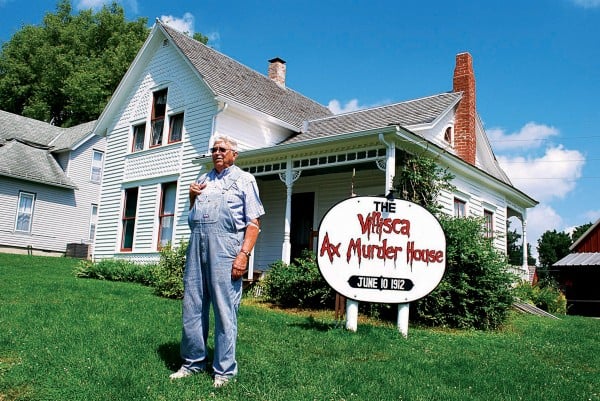 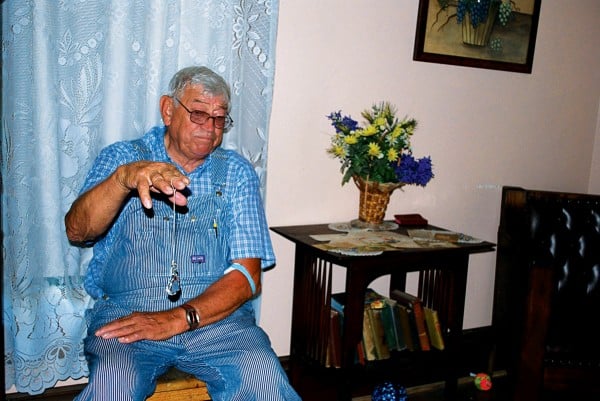 Darwin Linn owner of the Ax Murder House in Villisca, Iowa, uses a crystal on a string to ask spirits questions. He just asked Sarah Moore if she was in the house. The answer was “yes.” 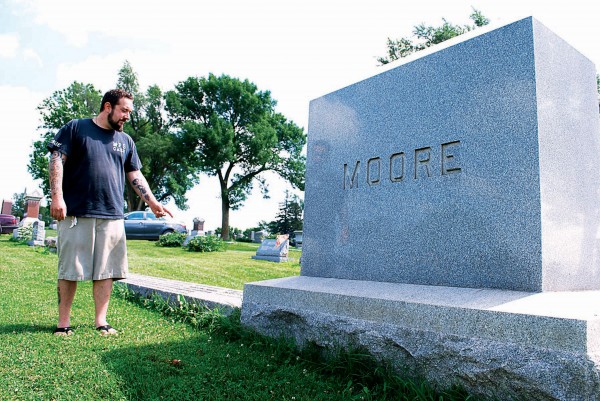 John Houser, local historian and tour guide at the Ax Murder House in Villisca, IA points to the grave markers for the Moore family in the Villisca Cemetery. Josiah and Sarah Moore, their four children and two neighbor children were brutally murdered in the beds during the early morning hours of June 10, 1912. Many believe their spirits are still in the house. 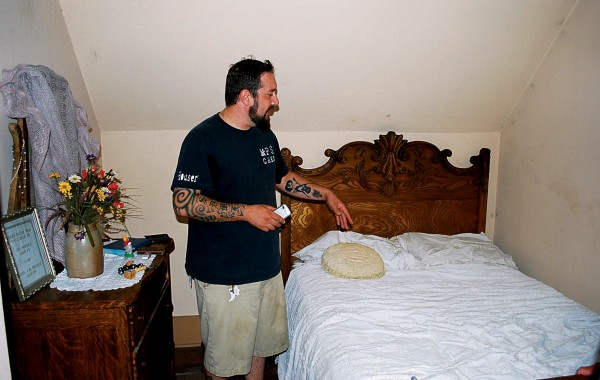 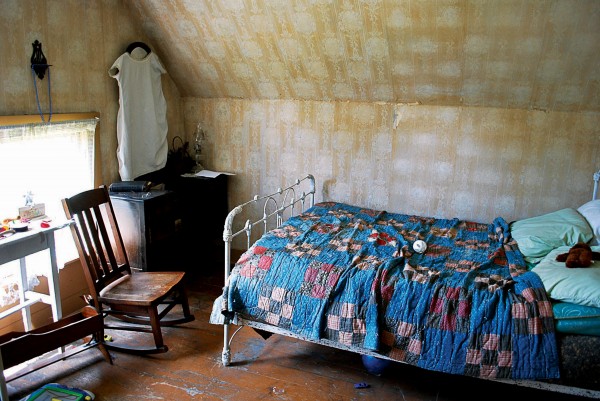 The upstairs bedroom where the Moore children were found murdered in their beds. 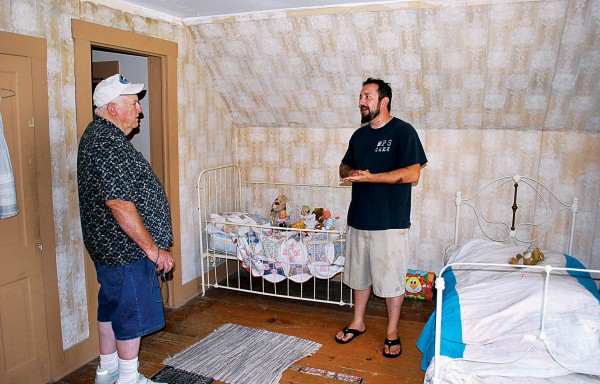 John Houser, local historian and tour guide at the Ax Murder House in Villisca, Iowa, explains to visitor Don Alcorn of Walnut Grove, Minn. the scene on the morning of June 10, 1912 when the four bodies of the Moore children were found bludgeoned to death in their beds.

Villisca, Iowa - It was a warm summer night on June 9, 1912, and while everyone in this small town slept peacefully eight innocent people (two adults and six children) were brutally murdered in their beds. Although the murders were committed almost 100 years ago, many believe the spirits of those victims are still in the house.

At the time of the murders Villisca was a busy town of 2,500 with businesses lining the downtown streets. The local train depot was a hub of activity with trains arriving and departing all day long. It was a peaceful Midwestern town and its name reflected that tranquility. One local resident said the name Villisca means “pretty place” or “pleasant view”. But after that horrific night in 1912 many wondered if the town’s name actually came from the Indian word “Wallisca” which means “evil spirit.”

That Sunday evening of June 9, 1912, the Moore family, father Josiah, mother Sarah and their children Herman, 11, Katherine, 10, Boyd, 7 and Paul, 5 went to the Children’s Day exercises at the Presbyterian Church in Villisca. Among those attending church that night were young friends of Katherine Moore, sisters Lena and Ina Stillinger. When the program was over Katherine invited the Stillinger sisters to spend the night at her house. An invitation that would prove fatal to the young girls.

The church program ended around 9:30 p.m. and it’s believed the Moore family along with the Stillinger sisters entered the Moore home between 9:45 and 10 p.m.

At about 5 a.m. the next morning Mary Peckham the Moore’s next door neighbor stepped outside and began hanging laundry on her clothesline. Around 7 a.m. she noticed no one had come out of the Moore house which was very unusual. A short time later she knocked on their door but no one answered. She tried to open the door but it was locked. Peckham became worried and called Josiah’s brother Ross Moore.

“He used a hand full of skeleton keys until he found one that worked,” said local historian and Ax Murder House tour guide John Houser. “He walked into the first bedroom downstairs and saw Ina and Lena. They were covered with the sheets pulled up tight. He ran outside and told Mary Peckham to get somebody down here. He told her something horrible had happened in the house.”

Mary Peckham returned with Hank Horton the town constable and Reverend Ewing the family’s minister. After briefly looking in the downstairs bedroom Constable Horton left to get Dr. J. Clark Cooper who was one of three physicians to arrive at the house that day. Dr. Cooper later testified at the inquest and said of the scene in the downstairs bedroom, “All we could see was a arm of someone sticking from under the edge of the cover with the blood on the pillows and I went over and lifted the covers and saw what I supposed was a body, some entire stranger and a mere child at the back of the bed. I did not recognize them at all, neither did any of the people, the others then that were with me and we merely saw that they were dead and that there were only two in the bed and then we stepped out into the parlor.”

Houser said the constable then went upstairs. “He found six more bodies that had been hit roughly 20 to 30 times each with the blunt end of an axe.” The crime scene appeared to have a ritualistic element to it said Houser. “All the mirrors and windows in the house were covered. The oil lamps were placed at the edge of the beds with the chimneys under the dressers.” Houser said the murder weapon, an axe belonging to Josiah Moore was found in the downstairs bedroom. “There was food left on the table, raw bacon was placed in the parlor bedroom and a pan of bloody water was found indicating that he had washed up at some point.”

Houser said the scene around the house soon turned chaotic when about 200 residents gathered outside the home. “Horton deputized a few people and they tried to set up a perimeter around the house. People were pushing their way in the front door and going in the back. They were storming the house.” Crucial evidence was quickly destroyed. “They wiped up the blood and handled the axe. It was rumored that Bert McCall who was kind of the town drunk actually stole a piece of Josiah Moore’s skull as a souvenir.” Houser said the local druggist arrived with his camera to take photos to help preserve the crime scene but Ross Moore threw him out of the house not realizing what he was trying to do.

Suspects in the murder investigation that followed included Frank F. Jones a business rival of Josiah Moore who was said to have hired William “Blackie” Mansfield a cocaine addict and serial killer to kill the Moore family, Reverend Lyn George Jacklin Kelly a British born traveling preacher who many said was insane and Henry Lee Moore (no relation to Josiah Moore) a convicted serial killer who reportedly killed 22 people in the Midwest. Henry Moore was convicted of killing his mother and his maternal grandmother with an axe just months after the Villisca slayings.

Because much of the evidence was either destroyed or compromised no one has ever been convicted of the crime. The only person to go to trail was Reverend Kelly said Houser. “He was a self-ordained minister who thought he had to commit the sins in the Bible to get inspiration for his sermons. He was arrested for barn burning, womanizing, window peeking and being a pedophile.” Kelly’s first trial resulted in a hung jury. He was tried again and acquitted.

Some in Villisca believe because the crime has never been solved the spirits of the victims can’t rest and they are still in the house.

Since that night in 1912 several people have reported seeing paranormal activity in the house. In 1930 newlyweds Bonnie and Homer Ritner rented the house for a short time. That is until Bonnie told her new husband she saw the image of a man with an axe standing at the end of the bed.

Another couple who purchased the home reported seeing a door open and close by itself. Later neighbors reported hearing a noise around 3 a.m. and looked out to see the couple running down the street in their nightclothes.

Years later two young girls living in the house told their parents they heard the sounds of children sobbing and crying in the night. The father didn’t believe it until one evening while sitting at the kitchen table sharpening his pocketknife the knife suddenly flew from his hands. He packed up his family and left that night.

Darwin Linn purchased the house in 1994 and began restoring it to its original condition. In 1997 the Iowa Historic Preservation Alliance awarded Linn and the house the “Preservation at its Best” award and a year later the Moore home was added to the National Register of Historic Places.

Don Alcorn of Walnut Grove, Minn., toured the house recently and although he didn’t see an apparitions he said, “It was interesting but spooky too.”

Linn said he knows the spirits of the Moore family are still in the house. “The balls (in the kid’s room) roll around and doors open and bang shut by themselves.” He said on one occasion those spirits let him know they didn’t like something. “One time I was upstairs and I picked up a handful of quarters off the bed. People were putting money around and then they’d go back and see if it has been moved. I started down the steps and I had the money in my hand. About half way down, the closet door just went ‘bang, bang, bang’. I stopped and turned around and thought I’ll just put this in the sugar bowl.”

Although he’s the owner of the Ax Murder House Linn said he’s not the boss. “I own the house but I still think Sarah Moore is in charge. And I get a good feeling when I say that. It’s still their home.”

To begin your tour of the Ax Murder House go to the Linn Olson Museum at 323 E. 4th St. in Villisca where you can purchase tickets. The guided tour includes not only the house but the Villisca Cemetery where the Moore family and others involved in the crime are buried. Overnight stays in the house are available for those who are brave enough.

Special Halloween events are available on October 16, 23 and 30. For more information about the Ax Murder House visit their web site at www.villiscaiowa.com or call Darwin Linn at (712) 621-4291.

Dave and Chris Sonnichsen of Remsen, Iowa, say visitors to their home always want to see the basement, where the body of a 10-year-old was buried.

Darwin Linn owner of the Ax Murder House in Villisca, Iowa, uses a crystal on a string to ask spirits questions. He just asked Sarah Moore if she was in the house. The answer was “yes.”

John Houser, local historian and tour guide at the Ax Murder House in Villisca, IA points to the grave markers for the Moore family in the Villisca Cemetery. Josiah and Sarah Moore, their four children and two neighbor children were brutally murdered in the beds during the early morning hours of June 10, 1912. Many believe their spirits are still in the house.

The upstairs bedroom where the Moore children were found murdered in their beds.

John Houser, local historian and tour guide at the Ax Murder House in Villisca, Iowa, explains to visitor Don Alcorn of Walnut Grove, Minn. the scene on the morning of June 10, 1912 when the four bodies of the Moore children were found bludgeoned to death in their beds.