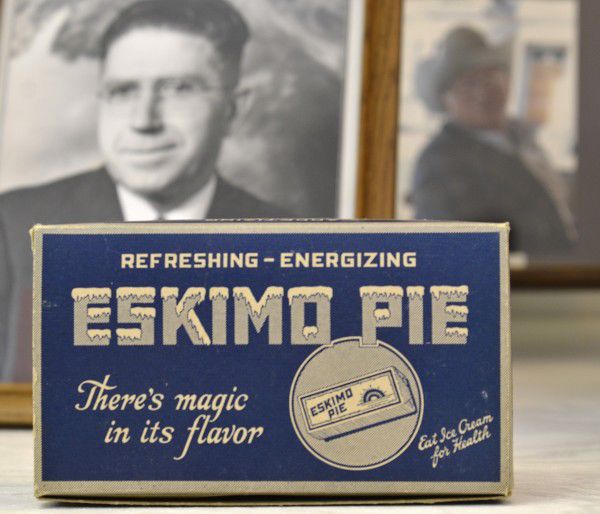 Eskimo Pie artifacts, including photos of Russell Stover, left, and Merle Cutler are shown at the Monona County Historical Museum in Onawa, Iowa, in this May 2012 photo. 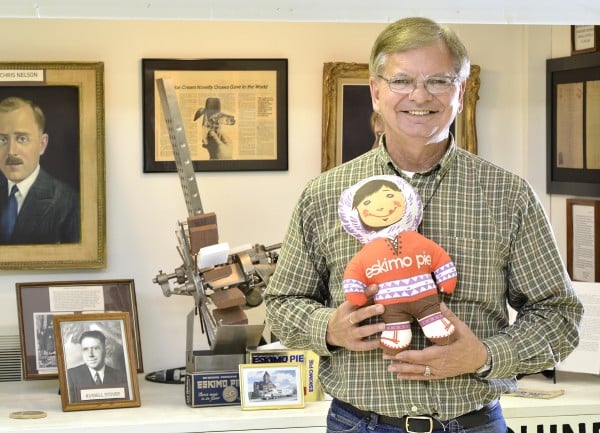 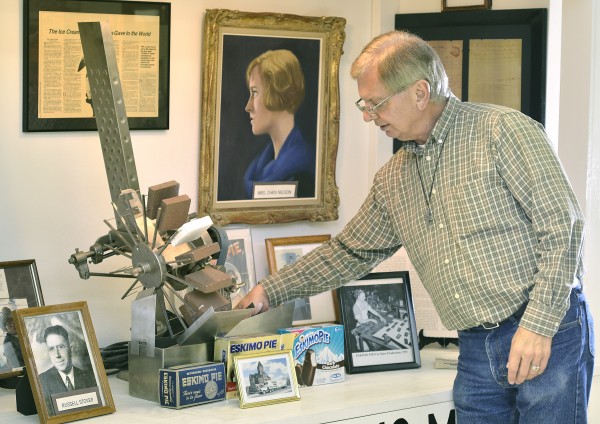 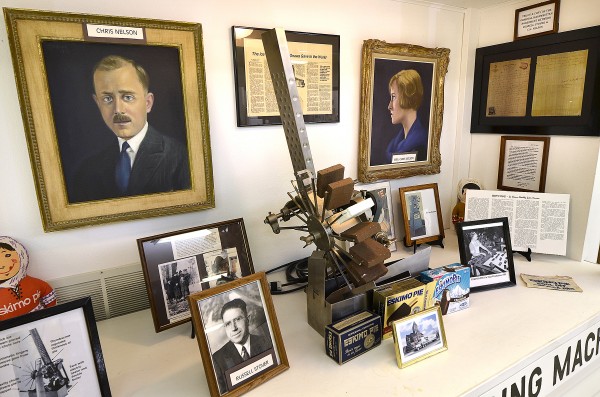 Created by Onawa, Iowa resident Christian Kent Nelson, Eskimo Pies were heavily advertised from the 1920s to the 1970s. 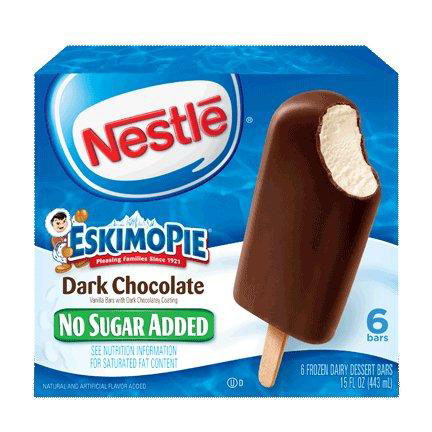 What's part ice cream and part chocolate bar, was invented in Onawa, Iowa, and has been refreshing kids for more than 90 years?

If you said it's the Eskimo Pie -- the first-ever chocolate-covered ice cream bar wrapped in foil -- you're right.

Now owned by Nestle Dreyer's Ice Cream -- the makers of Haagen Dazs, among other brands -- the Eskimo Pie came from the fertile imagination of Christian Kent Nelson, an Onawa schoolteacher and owner of the Royal Ice Cream Parlor.

Legend has it that an enterprising Nelson came up with a chocolate-covered concept when a boy in his store couldn't decide whether he wanted ice cream or a candy bar.

Tinkering with ways to adhere melted chocolate to bricks of vanilla ice cream, Nelson invented a dipping machine which seemed to do the trick.

Securing a patent for his newfangled piece of machinery, Nelson partnered with Omaha-based candy manufacturer Russell C. Stover and the two began mass-producing the frozen bars under the trademarked name "Eskimo Pie" -- a name suggested by Stover's wife Clara -- in 1922.

Independently wealthy off royalties from the sale of his frozen confection, Nelson retired young but grew bored.

The former math teacher ended his career at Reynolds Metal Company in 1961, where he invented new methods of manufacturing and shipping (you guessed it) Eskimo Pies.

Virginia Johnson, past president of the Monona County Historical Museum, has told the story of the origins of the Eskimo Pie to thousands of visitors.

"Onawa's known for having the widest street in the world and for being the birthplace of the Eskimo Pie," she explained. "People wanna hear about 'em and we're happy to oblige."

Indeed, the museum has an entire display dedicated to the chocolate-covered ice cream bar.

Among the artifacts on display is one of Nelson's original dipping machines, alongside vintage boxes promoting Eskimo Pie's apparent nutritional benefits.

For Johnson, a child of the Great Depression, Eskimo Pies was a luxury she couldn't afford.

"I remember having root beer floats," she said, "but individual ice cream bars, even at 5 cents a piece, was much too expensive."

Today, the Eskimo Pie is a piece of Onawa history she loves to share with family and friends.

"It's what made Onawa famous," she said as current museum board president Jim Robbins looked on.

According to Robbins, area school children are always intrigued at the museum's permanent shrine to the Eskimo Pie.

"They think it's fun that a product they've seen their entire lives was created right here in Monona County," he observed. "They're also amazed at how long the Eskimo Pie's been around."

For Diane McIntyre, brand communications manager for Nestles Dreyers', the product's longevity is a large part of its appeal.

"To many people, Eskimo Pies represents nostalgia," she said. "It's the ice cream bar that our parents or grandparents bought for us when we were kids."

The typical Eskimo Pie shopper is called a "Modern Traditionalist," McIntyre said because today's consumers want a quality product from a name with history.

Robbins agrees, noting that an Eskimo Pie always has the power to put a smile on his face.

"It's hard to be sad talking about ice cream," he said. "I think that's probably as true today as it was 90 years ago."

-- In the 1996 crime drama "The Chamber," convicted murderer Sam Cayhill (Gene Hackman) requested Eskimo Pies and coffee to be his last meal before being executed.

Sometimes, it's all in the timing.

With its revolutionary idea of combining vanilla ice cream and a chocolate shell, Eskimo Pie came on the market in 1921.

It's rival, the Klondike Bar, was created in 1922 by the Isaly Dairy Company of Youngstown, Ohio, the very next year.

While Eskimo Pies stuck with its tried-and-true vanilla ice cream - chocolate covering, Klondike offered a variety of ice cream flavors like grape, maple and cherry in their bars, even as early as their initial year of origin.

To date, Klondike has experimented with various ice cream flavors and different shells, including its triple chocolate bar which consists of a chocolate shell with chocolate ice cream plus chocolate syrup between the shell and ice cream.

But like Eskimo Pies, Klondike has a complicated history of ownership. Currently, the brand is owned Good Humor-Breyers, a part of Unilever.

Sioux City metro homebuilders in high demand: 'We're as busy as we've ever been'

Quartz is a top trend for countertops

A dear place to live: Rural home offers plenty of space to grow

SIOUX CITY -- Fred Yates said he and his wife Janice never dreamed they would be living in a rural development on the outskirts of Sioux City.

How to grow a beautiful pumpkin, with advice from a master gardener

This pumpkin face with merry gleam / Will light your way on Hallowe'en.

Eskimo Pie artifacts, including photos of Russell Stover, left, and Merle Cutler are shown at the Monona County Historical Museum in Onawa, Iowa, in this May 2012 photo.

Created by Onawa, Iowa resident Christian Kent Nelson, Eskimo Pies were heavily advertised from the 1920s to the 1970s.