Widest street in America?
View Comments
Share this
{{featured_button_text}}
1 of 3 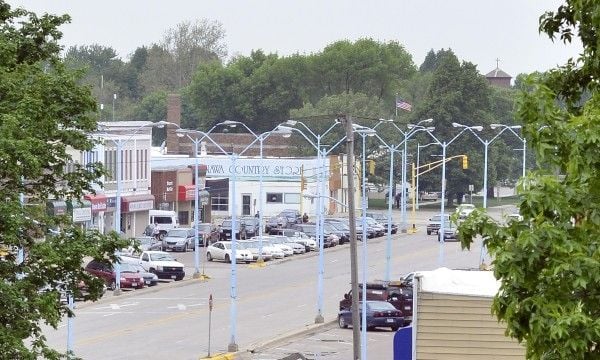 Traffic drives on Iowa Avenue in Onawa, Iowa, on May 2, 2012. It is said the be the widest main street in the U.S.

Terry Virtue, an Onawa resident for more than 75 years and engineer, grew up with the notion that his town had the widest main street in the USA.

According to Virtue, Onawa's main street, Iowa Avenue, also known as Iowa-175, is 150-feet-wide from storefront to storefront.

"There were two towns way back when and still are that say, 'No. That's not true they have wider main streets," Virtue said.

Twenty-five years ago, Virtue and his wife visited one of them, Keene, N.H. Although Keene's main street is 156 feet,  six feet wider than Onawa's, the way it was developed puts it out of contention, according to Virtue.

"The street down through the middle of the right-of-way was improved and then there were strips of grass and the sidewalk in front of the various retail stores," he recalled. "To me that really didn't qualify the same way as the one here in Onawa. I'm sure the people out there wouldn't agree with that."

Plains, Kan., has also tried to challenge Onawa. Its main street is 155 feet, 5 inches from storefront to storefront.

Jo Petersen, a former talented and gifted coordinator for the Onawa School District, said students tackled a project about Onawa's wide main street in the mid-1980s for National History Day.

"One of the girls and her dad went down late at night and measured the street from storefront to storefront," she said.

The student came up with 157 feet from curb to curb, according to Peterson.

Peterson also recalled an old photograph the students viewed at the city office, which showed horses and buggies parked down the middle of the street.

Why is the main street so wide?

Onawa Public Library Assistant Director Chris Zink said at one time, planners thought the railroad from Denison would run west right through town. That never happened. Unfortunately the street had already been platted.

Petersen said another theory is that the width would prevent fires from bouncing from one side of the street to another.

Whether Onawa really has the widest street in the country doesn't bother Virtue or Peterson.

"It really doesn't affect me at all," Virtue said. "It's been good publicity for the little town here. I don't think anybody really takes it seriously."

Peterson added, "It isn't something everyone gets all wound up about."

Traffic drives on Iowa Avenue in Onawa, Iowa, on May 2, 2012. It is said the be the widest main street in the U.S.