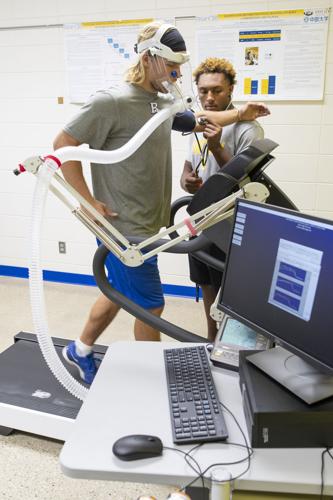 Erick Erdman runs on a treadmill at Briar Cliff University as Markel Roby uses a stethoscope to monitor him. Both are former Briar Cliff students who studied kinesiology. 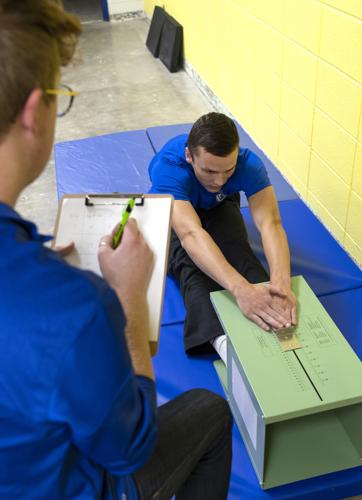 Jacob Ewart, a former Briar Cliff student, performs a sit and reach test as part of his kinesiology studies at the Sioux City college.

Fitness-related careers, such as these, are in high demand, according to George Panzak, an associate professor at Briar Cliff University, who also chairs the Sioux City college's kinesiology department.

"There's a big demand now for people," he said. "There's a lot of research going on with physical fitness and helping with cancer and chronic disease and also with positive quality of life issues and preventing heart disease, diabetes and reducing obesity."

Panzak said students interested in this field have a lot of options at Briar Cliff when it comes to choosing a major. He said it's uncommon for a smaller school like Briar Cliff to have a kinesiology department. Kinesiology is the scientific study of human body movement. Kinesiology has five major disciplines -- exercise physiology, biomechanics, neurophysiology, motor learning, motor control and motor development, according to Panzak.

"If they want to do clinical work, they can do cardiac rehab, become clinical exercise physiologists," he said. "The human performance major enables students to go into those very popular career tracks."

Panzak said the key difference between the two majors is that human performance requires at least one semester of biology and chemistry and, perhaps, physics, while exercise physiology has two semesters each of biology, chemistry and physics. He noted that the curriculum at Briar Cliff is "adaptable" to match students' interests and that students can spend time with a professional in their career field or choice in during an off-campus internship.

"I base our department and our career tracks and majors to try to meet any variation of students coming in," said Panzak, who said the majority of students who pursue these majors are student-athletes. "Whatever their interests are, I try to support their interests."

Taking mathematics classes, including algebra, as well as anatomy, physiology and biology in high school, Panzak said, will provide students with a "good foundation" for the human performance and exercise physiology majors.

Although there is no license process to become a personal trainer, a strength and conditioning coach or clinical exercise physiologist, Panzak said there are strong certifications. He said Briar Cliff is aligned with the National Strength and Conditioning Association and American College of Sports Medicine.

"If you look into scientific literature, far and above surgery and medication, appropriately prescribed exercise, hands down, is the No. 1 treatment," he said.

Next fall, Panzak said students will once again have the option of majoring in health and physical education. He said that major is coming back thanks to a joint effort between Briar Cliff's education and kinesiology departments.

"I really feel they're worth their weight in gold," Panzak said of physical education teachers. "They work with kids at a very young age -- movement, fitness. The whole idea there is to adopt physical activity as a permanent lifestyle activity."

Parkinson's disease can be a lonely and difficult disease, but a class at the Norm Waitt Sr. YMCA helps those diagnosed combat both the emotional and physical impacts.

After receiving a transplant from his daughter, Sioux City father has big plans

Phil Haefs grew up with only one working kidney. Its faulty counterpart wasn't discovered until after he turned 18, when a physical exam revealed high blood pressure -- the kidneys govern blood pressure and fluid balance -- and doctors found a kidney problem.

Healthy, easy meals (*and the reason why slow cookers and Crock-Pots aren't always the same thing)

Sweers said there is something everybody can agree about slow cookers: "They are great for in letting you get the most out of your ingredients," she said. "They also offer busy families a healthy, low-fat way of cooking that requires a minimum of effort."

ASK THE DOC: Coronavirus, prescriptions by mail and indoor fitness

Are there different symptoms for the different strains of coronavirus?- People infected with coronavirus can have a wide range of symptoms. These symptoms can range from mild to severe.

There isn't another house in Sioux City's Whispering Creek neighborhood that looks quite like Ryan and Megan Lawrey's farmhouse-style home on Wildbloom Court.

"We're seeing women now who are in their late 20s and 30s who actually have better skin than their parents did probably at that age. A lot of it has to do with the sun protection and just the quality of the sunscreens that we have now," Dr. Michelle Daffer said.

Can you get fit in 20-second intervals? The results may surprise you

During the day, Cara Kern is content teaching math to a classroom of high school kids. But in her personal time, the Sioux City native is a highly in-demand trainer who offers classes on spinning, planking and extensive calisthenics in a health club.

A day in the life of a school nurse

Daily medicine, fevers, cuts and bruises and COVID-19 tests are just a few of the things Mary Mason sees each day as a school nurse in Sioux City Community School District as she provides care for more than 1,400 students.

Nearly 30 local government, business and education officials took part in the Siouxland Chamber of Commerce's 45th annual Des Moines Legislative Day. They were joined by about a dozen high school students who serve on the Mayor's Youth Commission.

Erick Erdman runs on a treadmill at Briar Cliff University as Markel Roby uses a stethoscope to monitor him. Both are former Briar Cliff students who studied kinesiology.

Jacob Ewart, a former Briar Cliff student, performs a sit and reach test as part of his kinesiology studies at the Sioux City college.